Natural and Human-Made Disasters: A Primer for Our Times ©

Disasters:  “More Than a Word”

The word “disasters” has become much more than a word as humanity becomes aware of the numerous natural, human-made, and human-facilitated disasters in our times.  In distant times and in recent past centuries, relative isolation of people and events kept tolls of disasters exacted to more confined people and spaces. These tolls, obviously, were no less destructive in their tragic consequence for people and milieu. Indeed, some distant disasters continue to impact the evolution and survival of life today.

Examples of human-made events shaping in near century-times, include: (1) ancient Egyptian military conquests, (2) Alexander’s conquests, (3) Roman Empire conquests with subjugation of people and exploitation of land; (4) Mongolian conquests of Asia and Europe, and British imperialistic conquests of Asia, Pacific, and Africa.

Human-made disasters have been rooted in wars of imperialistic and empire intent among groups and nations seeking “global” hegemony. The impact of British Empire invasions and conquests remain with us today in the struggles of developing nations seeking to establish an identity and purpose under the burden of colonial occupation.

One of the most egregious legacies of the past continuing today is human slavery and labor exploitation.  We may never escape the consequences of WWI and WWII upon our lives and psyches. The past is always with us! Victimhood is a legacy many seek to correct and prevent; many others seek to forget.

Knowledge of the enormous destructive impacts of natural and human-shaped disasters upon animate and inanimate milieus has prompted nations and global consortia to develop organized risk and hazard efforts and tools. These include early warning, appraisal, communication systems, intervention, and prevention efforts. Recognized organizations include the USA’s Department of Homeland Security Disaster Program (Washington, DC) , the Center for Disease Control (CDC) in Atlanta, Georgia, and the World Health Organization (WHO), in Geneva, Switzerland. There are scores of cooperative agencies engaged in monitoring natural disaster and human-made risks.

Efforts to end human-made wars and violence among and within nations continue.  Even optimists, however, cannot deny the continuing horrors of current genocides and destruction and oppression of people the world. Human beings struggling to survive pray for relief and an end to wars and violence; but efforts have proven inadequate to the Brobdingnagian nature of the task. Tragic!

I have taken upon myself the task and responsibility to identify and communicate in graphic ad tabular forms examples of natural and human-made disasters. I do so because I believe it is essential we do not deny or ignore the multitude of risks we face. The graphic and tabular formats may be useful in immediate apprehension for teaching or discussion. Knowledge, by itself, is not necessarily prevention or salvation, but it does provide a foundation for grasping the spectrum and sources of the challenges we face.

A dictionary definition of disasters is in many ways unneeded.  We know that a disaster is an event of much destruction and suffering. Nevertheless, a dictionary definition is a shared arbiter of the denotative and connotative meanings of the term. There are many definitions. I like the following from the Webster App:

According to the Webster APP, the term was first used 1568, and is derived from the French “desastre” and Italian “disastro.”  I once asked my Sicilian mother about the status of a store bought boxed cake:  She is in English: It is a disaster.  There are big and small disasters, there are personal and global disasters.  In all instances, they are not good!

As a cultural psychologist, I wondered what terms constitute the lexicon in other languages and cultures. What, for example, would we find in Chinese languages, given the ancient age of this mighty land that has been compelled to withstand natural and man-made disasters for millennia!

Chart 2 is a graphic display of human-made and human-facilitated disasters.  The Chart’s contents reveal a tragic compilation of the consequences of human actions upon the species and upon of the natural world.  Some have taken to calling humans the super predator. If only animals and nature could speak? Table 2 provides a written summary.  Words versus images offer no consolation. The following sections elaborate upon disasters, offering  brief commentaries. 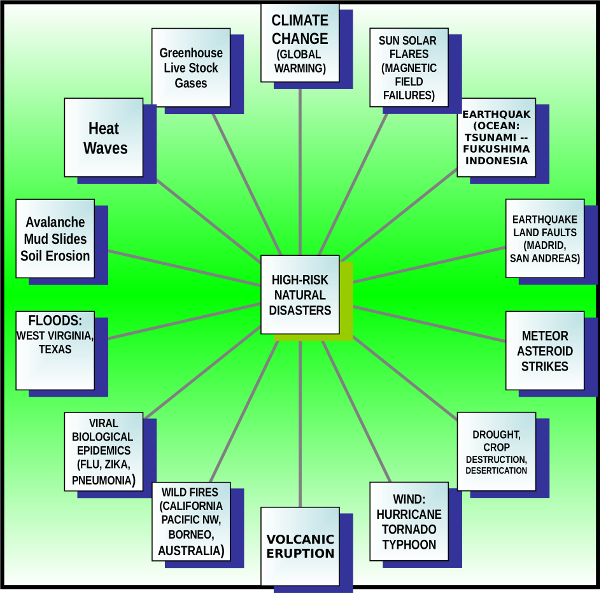 The human, economic, political, and moral costs of natural disasters is beyond estimation. When a mega-natural disaster occurs, all aspects of human and natural life are implicated, often for decades of recovery. Natural disasters are common-place across the world, even as some are confined to certain areas. Whether an onslaught of natural disasters may deplete and erode government capacities for intervention, and provoke regional and national instability is now a major concern.

There can be no doubt of the massive tolls exacted in death, destruction, and injury. The tragedy of natural disasters is further compounded by the fact natural disasters are frequent in number, severe in consequence, and often repetitive. Human roles in creating natural disasters are now widely known, especially in climate change challenges. Certain regions are subject to continual disasters and erosion of recovery resources. The Philippines is an example of this situation.

The growing number of human-made and human-aided disasters is humbling and frightening. Human stewardship of life in all its forms is proving to be a disaster in itself. I am reminded here of the popular Pogo cartoon:  “We have met the enemy, and it is us.”  True words!

Even as we question why humans continue to engage in self-destructive acts, we are perplexed by the paradoxes. We look to leaders, but amid their corruption, cronyism, and selfish concerns, solutions appear impossible.  A massive financial effort is needed; more importantly, however, there is a need for a new consciousness; humanity is part of nature, not its ruler!

The time-honored motivation of pursuing wealth, power, and position for a few to the exclusion of the welfare of the masses has become the norm.  Tragic!  “When will we ever learn?” These are folk song lyrics filled with the grief and sorrow of failures to learn form our actions. 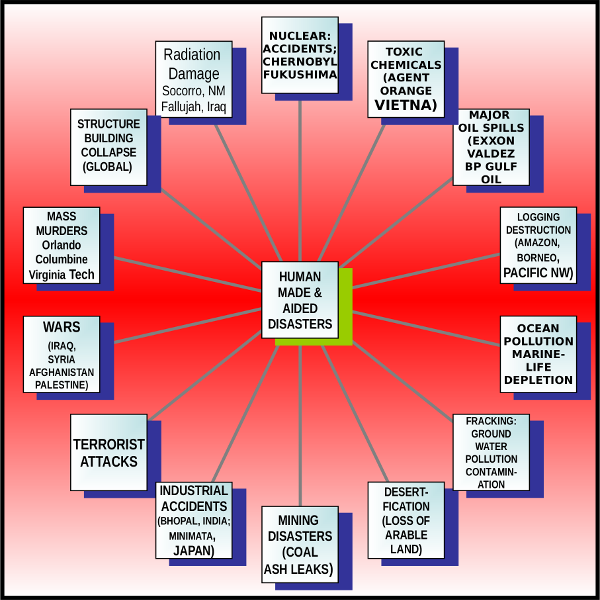 Even as I write these words, I find myself concerned about humanity’s future.  It is not only humanity’s survival, adaptation, and adjustment as we think of it in conventional terms it is about the extensive reliance on artificial intelligence (AI), and especially the unbridled use of AI in developing robotics. The combination of AI and robotics is challenging our basic assumptions of human nature (i.e. ontology). At some point, AI creations will surpass human capabilities and talents (i.e., singularity).  What then? Will this be another human-made disaster? I called this “Relinguishing Human Identity,” in a chapter on unfolding evolution via bio-metric communication technologies (see Marsella, A.J. (2016).  Gatherings:” A collection of writing genre. Alpharetta, GA: Mountain Arbor Press). Think drones! Think cloning! Think dehumanization! Think dystopia!

What can do we do?  The challenges we face are enormous in proportion and consequence.  The human, natural world, physical world costs exceed imagination. And yet we continue!  Is iit possible to use education to address these challenges?  Not traditional education mired in skill sets and memorization, but rather the introduction of visionary thoughts and knowledge.  Imagine all college students having to begin their education by exposure in the first years to “Big History,” overviews of major history events and forces, including the ideologies and malicious forces that guide and nurture them.

Imagine elementary school children in the third grade exposed to the critical social, economic, and political events and forces shaping their lives so they do not become numb to the events and forces.  The intent is a new consciousness. This is what the famous Brazilian educator, Paulo Freire, proposed in his critical pedagogy. Critical consciousness: in English “Conscientization; in in Portuguese, “conscientizacao.” Education is not neutral. (See Wikepedia and Paulo Friere (1997), Pedagogy of the Oppressed (NY: Continuum Publishing). If education serves those in power, it is indoctrination! Is critical pedagogy any less important than fractions or grammar?

If we are to survive the onslaught of disasters, we will need to think in a more activist way, and to grasp the consequences of our choices. We must not socialize conformity to our existing world, but rather arouse awareness and encourage protests toward our failures.

Albert Einstein, advised: “We cannot solve our problems with the same thinking we used to create them” Albert Einstein is no longer with us, but his words remain, and demand attention. Anything less … a disaster!

Anticopyright: Editorials and articles originated on TMS may be freely reprinted, disseminated, translated and used as background material, provided an acknowledgement and link to the source, TMS: Natural and Human-Made Disasters: A Primer for Our Times ©, is included. Thank you.