The United Nations has long denied that its own peacekeepers played a role in sparking the cholera epidemic, insisting the cause was uncertain. 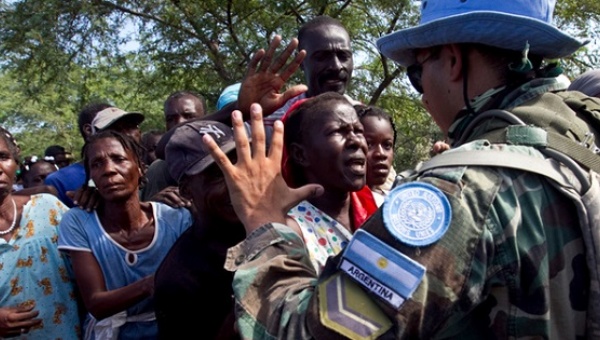 A soldier with the UN Stabilization Mission in Haiti gestures to local residents waiting to receive bottled water. | Photo: Reuters

18 Aug 2016 – The United Nations has admitted for the first time that its peacekeepers in Haiti played a role in the outbreak of the cholera epidemic in the aftermath of the devastating 2010 earthquake that sent the poverty-stricken Caribbean nation into a tailspin.

“Over the past year, the U.N. has become convinced that it needs to do much more regarding its own involvement in the initial outbreak and the suffering of those affected by cholera,” the U.N. secretary general’s deputy spokesperson Farhan Haq wrote in an email, according to the New York Times.

Haq added that that the finding calls for a “significant new set of U.N. actions” and that a “new response will be presented publicly within the next two months.”

The comments come in response to a report by U.N. special rapporteur and New York University law professor Philip Alston. According to the Washington Post, Alston argued to Secretary General Ban-ki Moon that the United Nations botch response in Haiti’s cholera crisis is “morally unconscionable, legally indefensible and politically self-defeating.”

The human rights and international law expert added that the U.N.’s years-long refusal to admit its role in causing the cholera outbreak “upholds a double standard according to which the U.N. insists that member states respect human rights, while rejecting any such responsibility for itself.”

While the U.N.’s latest statements don’t go as far as to shoulder the entire blame, they represent a significant shift from the position maintained over the past six years. Statements by the U.N. as recently as a couple of weeks ago make no gesture toward accepting responsibility.

OPINION: The Past is Prologue with Haiti’s Elections

The cholera epidemic first struck Haiti in October 2010, less than one year after the disastrous earthquake that worsened longstanding poverty and instability and has left the country reeling years to this day. The first people affected by the outbreak lived near a U.N. base housing over 450 peacekeepers, recently transferred from Nepal where cholera was already an issue.

While a number of researchers identified the peacekeepers as ground zero for the epidemic–contaminating the river by using it as a bathroom– the U.N. has long denied the claim, insisting that the cause of the public health crisis is uncertain.

According to U.N. figures, a total of 13,859 suspected cholera cases were recorded in between Jan. 1 to April 2, 2016 in Haiti. The organization reports that there have been more some 10,000 cholera-related deaths since the outbreak in 2010, though Doctors Without Borders have argued that the actual death toll is likely higher.

In his report, Alston has argued that the United Nations should offer reparations to families of victims of the cholera outbreak as part of accepting responsibility.

The U.N. has been advocating rapid response mobile health teams to tackle cholera in Haiti. The new measures called for in response to the report are expected to be announced within weeks, according to the spokesperson.