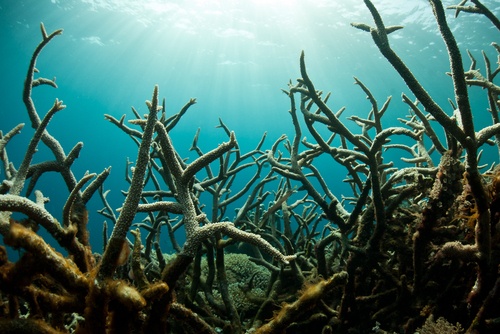 8 Sep 2016 – A major new scientific report, “Explaining Ocean Warming” was released on September 5th. It is grim. According to the International Union for Conservation of Nature (IUCN) World Conservation Congress in Hawaii, the findings are based upon peer-reviewed research compiled by 80 scientists from 12 countries. It is the most comprehensive study ever undertaken on the subject of warming of the ocean.

Significantly, the ocean has absorbed more than 90% of “enhanced heating from climate change since the 1970s.” In other words, the ocean has been “shielding us” from the extensive affects of global warming. And, the consequences for the ocean are “absolutely massive.”

The “seasons in the ocean” are actually changing as a result.

“The scale of ocean warming is truly staggering with the numbers so large that it is difficult for most people to comprehend,” D. Laffoley, et al, ed. Explaining Ocean Warming, IUCN Global Marine and Polar Programme, Sept. 2016.

“A useful analysis undertaken by the Grantham Institute in 2015 concluded that if the same amount of heat that has gone into the top 2000m of the ocean between 1955-2010 had gone into the lower 10km of the atmosphere, then the Earth would have seen a warming of 36°C.”

In other words, humanity would be toast.

Here’s one of many dangerous “hooks” mentioned in the report: “Crucially, as evident in the past two years, the heat and CO2 accumulated in the ocean are not permanently locked away, but can be released back into the atmosphere when the ocean surface is anomalously warm, giving a positive rapid feed-back to global warming,” which would entail a decidedly harsh blow to life on the planet.

The 500-page report is all-inclusive with several subsections dealing with individual oceanic issues. Yet, a general overview of the “chain of impacts” is perhaps most relevant to an understanding of the dire consequences of failure to act by halting CO2 fossil fuel emissions as soon as possible.

The “chain of impacts” clearly demonstrates the linear interrelated behavior of ocean warming, ocean acidification, and sea-level rise. Due to a domino effect of one problem cascading into others, key human sectors are now threatened, e.g. fisheries, aquaculture, coastal risks management, general health, and coast tourism.

In point of fact, scientific studies show rapid deterioration throughout the “change of impacts” statement such that an all-out alarm is necessitated. In short, the ole public clarion bells need to start ringing hard and loud because “the impacts on key marine and coastal organisms, ecosystems and ecosystem services are already detectable from high to low latitudes transcending the traditional North/South divide.”

In other words, the entire world oceanic ecosystem is already showing signs of severe stress or oceanic sickness.

All-important, the ocean is a “climate integrator” that regulates the entire planetary biosphere by absorbing 26% of human-caused CO2 and 93% of additional planetary heat. “Without the ocean, present climate change would thus be far more intense and challenging for human life.”

Meanwhile, the regulating function of the ocean comes with heavy costs, for example, ocean acidification and availability of carbonate ions are disrupted, which are building blocks for marine plants and animals to make skeletons, shells, etc.

This acidification impact is already a factor at the base of the food chain, as tiny pea-sized pteropods, which serve as food stock for everything from krill to salmon to whales, show ultra-thinning of their protective shells necessary for both reproduction and maturation, a problem especially found in the Southern Ocean. This early stage risk to disruption of the food chain is caused by excessive carbon dioxide (CO2) absorbed into the ocean emitted by fossil fuels.

Astonishingly, sea level rise, the most noticeable oceanic impact, has already dramatically increased its rate of increase over the 1901-2010 period as the rate of rise from 1993-2010 accelerated by an astounding 88%. This sea level rise is already felt in cities like Miami where streets are being raised and additional pumping systems installed (Miami Beach is Raising Streets by 2 Feet to Combat Rising Seas, miamibeachrealtor displays a photo of newly raised streets).

Assuming business-as-usual anthropogenic climate change, sources of dietary protein and income for tens of millions of people will likely be severely impacted by mass mortalities. Wherefore, the ole clarion bell needs to ring even louder, waking up citizens to the threat of impending serious food shortages. Fisheries and aquaculture, which are both key for survival for millions, are already at high risk.

Meanwhile, and unfortunately, climate change contemporaneously continues to negatively affect land agriculture, which will likely exacerbate food shortages with the ocean simultaneously stressed. In all, ocean warming is synergistic with other human-induced stresses such as over-exploitation, like drift net fishing, and habitat destruction, e.g., bleached coral, and chemical pollution, for example, Ag runoff.

The report has suggested solutions to ocean stress, as for example: (1) mitigating CO2 emissions by getting off fossil fuels is number no. 1 on the hit list, followed by (2) protecting marine and coastal ecosystems by governmental regulation of “protected areas” and (3) repairing damaged ecosystems with, for example, coral farming, and (4) adapting economic diversification zones and activities.

Importantly, the landmark study emphasizes the fact that “unequivocal scientific evidence shows that impacts on key marine and coastal organisms, ecosystems, and services are already detectable and that high to very high risks of impact are to be expected,” Ibid, page 53.

That statement is as straightforward, pulling no punches, as scientific papers ever get. The evidence is crystal clear that climate change is disrupting the ocean, which is the only ocean we’ve got.

There are no backups.

Here’s hoping Mr. Trump reassesses his “global warming is a hoax” statement. After all, he has a big audience.