What You May Not Know about the Dakota Access Pipeline

teleSUR spoke with the lawyer coordinating legal advice and representation for protesters at the North Dakota camps. 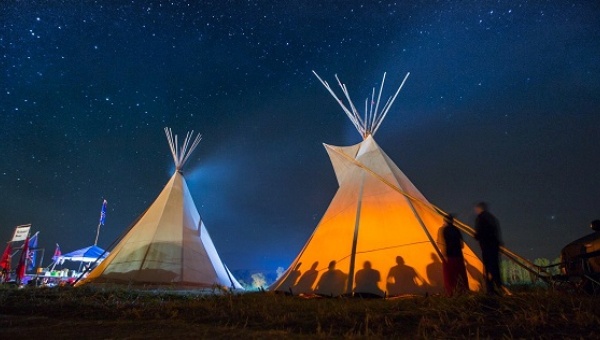 The #NoDAPL protesters will continue their fight in the coming months.
Photo: Facebook / Tomas Karmelo Amaya

11 Sep 2016 – The Dakota Access Pipeline has been drawing national attention for threatening Native American ways of life and land. As protesters hailed a victory on Friday handed down by three federal departments, a slew of legal issues remain at hand.

Between what the tribes have already dealt with and what they have yet to face, attorney Robin Martinez—who is coordinating legal advice and representation for protesters at the North Dakota camps—had answers.

RELATED: Dakota Protesters vs. Pipeline: Who Has the Final Trump Card?

What is the status of the land where the camps are located?

The Sacred Stone Camp, the main traditional protest site created by the Standing Rock Sioux Tribe in April, is on land that used to belong to the tribe but was “in effect stolen” through eminent domain by the Army Corps of Engineers for flood control, said Martinez. The Army Corps of Engineers began building the Oahe Dam in 1948, flooding over 160,000 acres to create the Oahe Lake, where protests are clustered. A quarter of tribe members had to relocate.

Martinez said that a tribe member once told him that, “What flood control really means is that the whites control the water and the Indians get flooded.”

Another camp, the Red Warrior Camp, is on private land in order to be closer to the construction sites, where nonviolent direct actions is organized. Work on private land was not affected by Friday’s joint announcement to halt building on federal land.

Is the state of North Dakota acting illegally?

The state of emergency to access resources from the Department of Homeland Security was made on the basis that organizers are violent and fighting with pipe bombs and hatchets, which they deny.

The protesters can’t challenge the governor’s move, but they are highlighting the unjust use of roadblocks to reroute supporters trying to enter the camps, an issue which the Standing Rock Sioux Tribe brought to the United Nations. Reports have also come out of law enforcement taking pictures of passersby and using facial recognition which, Martinez said, will likely be used for an upcoming mass arrest. The Morton County Sheriff justified the roadblocks as a safety precaution.

Some have suspected that officials have also cut off telecommunications, but Martinez said that poor reception is likely because there is one phone tower in the area serving thousands of cell phones. He added, though, that he would not be surprised if authorities did try to cut power and “would be shocked” if they weren’t already intercepting all communications from the tower, which is owned by Verizon.

OPINION: Tribal Dakota Pipeline Resistance the Start of Something Bigger

Why did the Standing Rock Sioux Tribe lose its case to stop construction?

First, they found the Army Corps of Engineers in violation of the National Historic Preservation Act, which requires the Corps to solicit and gain the consent of the tribe. The Standing Rock Sioux Tribe argued that just contacting a few individuals did not constitute meaningful consent. Judge James Boasberg found it was sufficient according to current law, which the Departments of Justice, the Army and the Interior said they would consider revising after discussions with tribes.

Second, the tribe was unsatisfied with the cursory environmental assessment the Corps conducted before granting the permit. After a brief study, the Corps filed a finding of “no significant impact,” precluding further study because of the procedure dictated in the Nationwide Permit 12, which allows for minimal review—a permit originally intended for public projects like power lines and sewage, said Martinez. The tribe argued that the finding was understated and should have instead initiated a procedure to conduct a full environmental impact study. Boasberg did not challenge the Corp’s review.

The tribe had to prove that “irreparable injury” would be caused by construction as they await a decision on a lawsuit against the permit altogether. Boasberg wrote that they did not make the claim on land and water, but rather on sites of cultural and archaeological significance, which was not a strong enough case.

Are any other tribes involved in the lawsuit and what are they adding to the case?

The Standing Rock Sioux Tribe is appealing the judge’s rejection of their preliminary injunction, and the Cheyenne River Sioux Tribe is intervening in the appeal. They filed an amended complaint on Friday, referencing a treaty that obligates the U.S. government to ensure tribal land is permanent and livable, including protecting the right to clean water.

The Yankton Sioux Tribe filed a separate lawsuit against both the Corps and the U.S. Fish and Wildlife Service the day before the Standing Rock ruling. The claims are similar but also reference wider international obligations for “free, prior and informed consent” guaranteed under the U.N. Declaration on the Rights of Indigenous Peoples and the responsibility to “ensure the civilization” of the Lakota people under the Fort Laramie Treaty.

The suit also makes an argument based on environmental justice, which every federal agency has the duty to respect. Martinez said that the pipeline was originally planned to run upstream of Bismarck, the “almost all white” state capital, but following complaints they rerouted upstream of the Standing Rock reservation. The “very astounding” racism would make a strong environmental justice case, he said.

If the Standing Rock Sioux Tribe wins its suit against the Army Corps of Engineers, is the project called off?

If the tribe manages to strike down the Corps permit for construction under federal waterways, Dakota Access can reroute the pipeline and, if it can’t win the powers of eminent domain, it can negotiate with individual landowners for the right to cross their property.

Many have already signed easements with the company, which effectively coerced landowners, who thought they had no choice, said Martinez. If they did not voluntarily agree to an easement and accept the money for the Dakota Access’s use of their land, he said, the company could threaten to use eminent domain and pay them nothing.

Now that the pipeline is gaining international attention, though, it may have a similar fate as the Keystone XL Pipeline, which was rejected by President Barack Obama because it would “not serve the national interest.”

Should a similar scenario happen, or should Dakota Access decide to call off the project, it would have to take the pipes out of the ground and dismantle the construction that has already taken place. Martinez, who represented South Dakota farmers and ranchers against the Keystone 1 Pipeline, said that while the company is required to restore their property to how it was before construction, they rarely fulfill their promise. Oil leaks aside, the pipeline often damages the land and prevents crops from growing again: oil from tar sands, for instance, must be heated up to flow through the pipeline, burning the land around it.

What about the rest of the pipeline on non-federal land?

The announcement to halt construction on federal land affected a small percentage of the total pipeline. The vast majority goes through the land of farmers and ranchers.

In Iowa, farmers and ranchers have banded together with environmental groups to overturn Dakota Access’s power of eminent domain. They have a case pending in court and organized several actions against the Iowa Utilities Board as part of a “growing backlash on the part of farmers and landowners to that concept” which, Martinez said, was originally meant for public projects.

Dakota Access will argue that its pipeline serves a public purpose, but Iowa echo Keystone XL resisters in arguing that the oil, meant for export, is only extracted for private gain. While the tribes in North Dakota have already laid their cards on the table, the Iowa case may be a real “stumbling block down the line,” said Martinez.

Correction: An earlier version of this article stated: “…the Cheyenne River Sioux Tribe is interfering in the appeal.” It should have read intervening.