While the U.S. abstention may be a nod to the potential lifting of the blockade, Cuba insists that it will not return to capitalism. 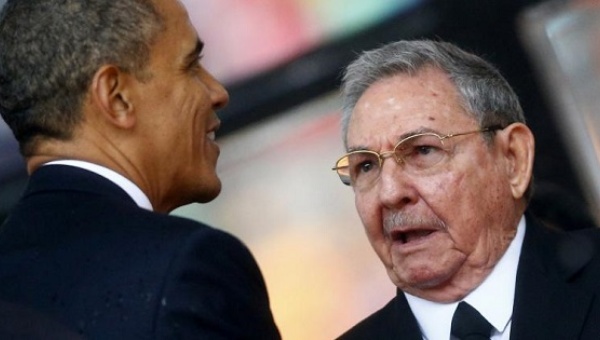 In a historic step toward lifting the blockade on Cuba, the United States abstained Wednesday [26 Oct 2016] in the United Nations General Assembly vote, unanimously calling for the end of the Cold War measure for the 25th consecutive year.

IN DEPTH:  US Blockade on Cuba

Cuban Foreign Minister Bruno Rodriguez presented the draft resolution to the assembly, heralding the U.S. announcement of a historic abstention as a “positive step” in the ongoing process of normalizing relations between the two countries after decades of resistance by Cuban people.

“There is no doubt that progress has been made … However, the economic, commercial and financial blockade persists,” Rodriguez said. “It causes harm to the Cuban people and impairs the country’s economic development.”

Rodriguez highlighted the fact that U.S. President Barack Obama and other leaders have acknowledged the “obsolete” nature of the blockade and the fact that it is a “failed nonsensical and unviable policy and a burden to all citizens that harms the Cuban people and plunges the United States into isolation and should be lifted.” He also argued that ending the blockade would give “meaning, depth and soundness” to the progress toward renewed relations that has been made so far since the end of 2014.

Speaking to the General Assembly, the representative of the Caribbean community Caricom, Jamaica’s Courtenay Rattray, stressed that “virtually the entire international community has consistently highlighted that this … measure is inconsistent with international law” and called for a move to “bury the last remnant of the Cold War in the Americas.”

The representative of the Community of Latin American and Caribbean States, known as Celac, the Dominican Republic’s Francis Lorenzo, echoed condemnation of the blockade for going against the U.N. charter and international law, calling the measure “unjust” and a “major obstacle to the normal development of Cuba.”

But although the U.N. has been telling the White House to nix the blockade for a quarter of a century and is highly politically symbolic, the resolution is non-binding, meaning it holds little weight to force concrete action. Only U.S. Congress, where friendlier relations with Cuba have been rebuffed by Republicans, has the power to lift the blockade on Cuba.

Washington’s overtures to restore normal diplomatic relations with the island nation proceeds in fits-and-starts. U.S. President Barack Obama has assured his Cuban counterpart Raul Cast that the blockade will be lifted, but he has not specified an expected timeline of when that might happen despite maintaining that it is a logical step in the normalization of ties. Last month, Obama renewed the U.S. Trading with the Enemy Act, extending the blockade against Cuba for another year. Obama has admitted that the blockade is “hurting the Cuban people.”

OPINION: With UN Vote Due, Will US Ever Lift Blockade Against Cuba?

Cuba claims that the blockade has cost the island nation US$4.7 billion in past year in lost potential export revenue and trade and financial transactions and a whopping US$753.7 billion over the past half century.

Cuban officials have repeatedly insisted that ending the blockade is an essential precursor to the full reestablishment of U.S.-Cuba relations, which reached a breakthrough with a historic rapprochement in 2014, criticizing the policy as an outdated relic of Cold War-era politics.

Despite the landmark reopening of foreign embassies in Havana and Washington, commercial flights between the two countries, and other changes, talks are ongoing and diplomatic challenges remain. And the blockage is at the center of the debate.

Cuba has also called on the U.S. to return the U.S. naval-occupied territory of Guantanamo to the island, end the Cold War-era migration policy toward Cubans, and to respect Cuban sovereignty by halting all funding of anti-government groups.