26 Nov 2016 – A journalist asked me a few questions to get sound bites and quotes.  I turned them into a more comprehensive interview. Thought this may serve as a succinct backgrounder if you are interested in the contextual view of the current annihilation phase of the Rohingya genocide. 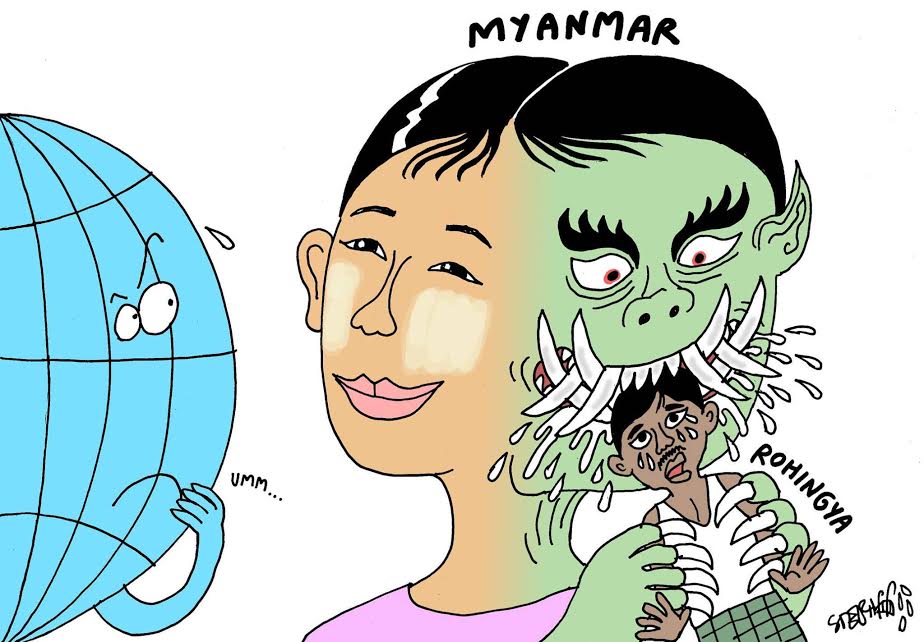 Why do you as a Buddhist and Burmese support Rohingys when your whole country, the military, the NLD and the society, hate and want to evict them as a group?

Historical evidence clearly indicates today’s Rakhine coastal region to
be an ethnically and religiously diverse shared homeland for both
Rakhine and Rohingya for centuries.  This is also the region that had
far greater historical interaction and inter-mingling with the Bay of
Bengal-based communities of present-day east coast of India,
Bangladesh (East Bengal) than the central plains of Burma, where
today’s dominant, ruling group, the Burmese,  have been based.
I therefore support unequivocally the right of return for Rohingya
people – close to a million by now – whom the Burmese have purged
since the first army-organized large scale operation in 1978.   There
are more official reasons which compel me to support the Rohingyas and
their cry to live in Northern Rakhine.

First, the governments of Burma, including the senior most leaders of
the Burma Armed Forces embraced officially and verifiably Rohingya
people as one of the ethnic minorities of the Union of Burma.  Second,
Rohingyas are like any other ethnic minorities along Burma’s porous
and long borders with China, India, Thailand and Bangladesh, whose
presence and identities predate the emergence of present-day Burma.
Burma as we know it is a colonial product of negotiations amongst the
Burmese nationalists, ethnic minority leaders and the British
colonials, and its borders were drawn artificially, splitting up these
borderlands communities into members or citizens of new nation-states.
As early as 1950’s the Burmese leaders, both civilians and military,
acknowledge the presence and adjustable identities these borderlands
people.

I know this because my own late great-uncle was a senior commander
stationed in Rakhine, who was Deputy Chief of the predominantly
Rohingya administrative district named Mayu District, after Mayu River
in Northern Rakhine.

In addition, there are over 1,3 million Rohingyas – by Burma’s
official, conservative estimate – that continue to live in what you
may call ‘vast open prisons’ where the ethnic cleansing is taking
place.   The Burmese government of ex-general Thein Sein proposed to
the visiting UNHCR head in August 2012 to effectively evict them and
transmigrate them to other countries, with UN financing.  UN rejected
the proposal on grounds that Rohingyas are not refugees.  They are the
country’s people, born and bred there, and it is the Burmese state’s
responsibility to look after them.

Even without discussing the genocidal acts committed by the Burmese
regime, the fact that it refuses categorically to register the birth
of every single Rohingya new born makes Burma a major violator of
international law, for instance, the Child Right Convention, which
entitles all new-born infants, the right to a nationality.    My
country is verifiably in the wrong, in terms of facts and
international law, not to mention on grounds of Buddhist principles of
compassion and human kindness.

Is Aung San Suu Kyi ignoring the plight of the Rohingyas?

Aung San Suu Kyi is not simply ignoring or lukewarm about the plight
of Rohingyas.  She is personally complicit and now officially guilty
in making their plight worse by the day.

She is reportedly very “racist” towards the Muslims, and she unilaterally made the decision to NOT allow any Muslim MP in her party during the 2015 election,
effectively pandering to the majoritarian anti-Muslim electorate.
She shares the Burmese generals’ concern about the growth of Muslim
population and she shares their military’s institutionalized view that
Rohingyas are illegals or just colonial era migrants with no root in
the country.      By cleansing her now nominally ruling NLD of all
Muslim MP candidates and representatives, she has practically aligned
herself with the army, her key partner.

Why is there so much majoritarian racism towards Rohingyas and Muslims?

It is important to note that the ground-swell of Islamophobia is to a
large extent the outcome of decades of Myanmar military’s anti-Muslim
propaganda.   The generals turned racists and purged the armed forces
of Muslims at all levels.   and they turned sight on to the society at
large.  Beyond communal prejudices between Buddhists and Muslims,  the
hatred, fear of Muslims among the majority Burmese, as well as other
non-Rohingya non-Muslim minorities is just unprecedented.    This
anti-Rohingya and anti-Muslim popular hatred is akin to Nazi Germany’s
popular and official anti-Jew sentiments.     That is why, Aung San
Suu Kyi, pandering to the military and popular racism towards
Rohingyas is extremely troubling.

Have the international communities not actually created enough pressure on Myanmar to treat the Rohingyas fairly?

The mythical international community has known the persecution of the
Rohingyas for decades – in fact since 1970’s.   There is plenty of
evidence and documentation from the Rohingyas, from human rights
organizations such as Amnesty International, Human Rights, embassy
reports, UN reports, etc.      But the UN has failed to take any real
and concrete measures or actions to stop a member state violating
blatantly all major international human rights laws and treaties –
like the Rome Statute Article 6 (Genocide Convention of 1948), Child
Right Convention, CEDAW.

The failure of the UN and the failure of the Burmese leaders to
address the needs of the ROhingya to lead a peaceful normal productive
community life in their own homeland of N. Rakhine is going to have
major negative ramifications for Burma, region and the world.    In an
otherwise fractured Islamic world, Rohingya genocide is the one issue
that anger 1.7 billion Muslims around the world.  That anger will in
due course translate into radical actions to end the Rohingyas’
plight.

This is an overview of what I think is happening and what is in store for Burma.

Myanmar’s persecution of the Rohingyas unites ALL MUSLIM COMMUNITIES unlike any other issue.   In due course, this justified outrage among the Muslim communities around the world – and outrage at the failings of Western regimes and the UN System  – will morph into radical actions, support and calls for Jihad in Burma – in the real sense.

Burma has more than enough on its plate.  When – not if – the GRASSROOTS rage among Muslims of the world explodes that will spell deep troubles for the Burmese society, economy and politics.

The military is on a trajectory that will prove self-fulfilling sooner rather than later.

Here is what I think of the leadership of Aung San Suu Kyi and Min Aung Hlaing.   (When I was trying to puncture the sanctions regime and re-engage the world in Burma I worked with a couple of young colonels.  One of them has become Min Aung Hlaing’s right hand, and is tipped to be ‘the next commander in chief’ after Min Aung Hlaing.  Knowing these military men – and myself a military officers’ corp admit as a young man, I have little confidence in the capacity of these one-dimensional men to lead the country out of the decades of mess, previous generations of politicians and generals have created.

Aung San Suu Kyi and Min Aung Hlaing have put the country on a slippery slope of Balkanization, proxy wars, and Jihadist battles.

They are doing so, out of their racist delusions, miscalculations, and illusions of power and grandeur.

Min Aung Hlaing and genocidal generals thought they were brilliant in continuing on with the Tatmadaw’s 4-decades of Rohingya Genocide.

The Tatmadaw thought it was godsend.

1) So, they pounced on the Rohingya. The generals attempted to wipe out as many Rohingya villages and communities as possible.

2) Their propaganda geniuses – like Ye Htut, Zaw Htay, etc. – gleefully framed the Rohingya attackers as “Jihadists” “ISIS-style fighters” “militants” “extremists”, and in short, “TERRORISTS”. They didn’t even bother with the Rakhine fall-guy option and ‘communal conflict’ or “sectarian violence” spins. They were getting in on for the slaughter themselves.

3) Oops, the impact of their attacks on the Rohingya got caught on satellite cameras. They were forced to admit that the Air Force was involved in the ethnic cleansing by flying gunship helicopters.

5) Unable to conceal their genocidal deeds on the ground from the impact-dectors up the Northern Rakhine sky, Min Aung Hlaing ordered his men to seal off the genocidal fields of N. Rakhine while blocking aid to 100,000 Rohingyas.

6) Honey-tongued but deceitful, Min Aung Hlaing and team decided to let a small group of western diplomats to go and assess the situation, while emptying vast areas of any Rohingya who might speak to the diplomat-investigators. (Rohingyas found ways to appear on the route of the visiting dip delegation!)

7) The lies, denials and fabrications by Min Aung Hlaing and his spinmasters are such that no-body in their right mind buys any of the official spins.

8) Meanwhile, the Rohingya activists have captured and disseminated worldwide all the images of crimes – all recorded on smart-phones – committed by Min Aung Hlaing and his men.

9) Unlike previous waves of violence, Rohingya activists were better prepared. Smart-phones, social media, etc. enable them to let the world witness the GENOCIDE; it has been going on since 1978.

10) Min Aung Hlaing and his racist genocidal deputies miscalculated the response from the ASEAN and South Asia. With thousands of Muslims angrily taking to the streets on Friday in Dhaka, Chittagong (right next to Western Burma), Jakarata, Bangkok, and Kuala Lumpur, and Rohingya news on the front pages of national newspaper, the discourse around Rohingyas have shifted irreversibly:

I think both Suu Kyi and Min Aung Hlaing leaderships are putting the country at grave risk of furture instability, violence and a definitely a very probably site for Jihadist battles.

The country is already a proxy theatre for US-led western forces and China, with the un-finished civil war along very strategic borders, making the entire country vulnerable to the Great Power Games.

With so many fronts being opened, and with completely un-impressive ability to even fight the information war in the social media and conventional media vis-a-vis human rights and Rohingya activists, the generals will in due course lose their own plot.

They have bitten off more than they could chew.

But, the public in Burma will pay for the racist, stupid leadership of both Aung San Suu Kyi and General Min Aung Hlaing.

Anticopyright: Editorials and articles originated on TMS may be freely reprinted, disseminated, translated and used as background material, provided an acknowledgement and link to the source, TMS: Dr. Maung Zarni on the Rohingya Muslim Genocide in Buddhist Burma/Myanmar, is included. Thank you.