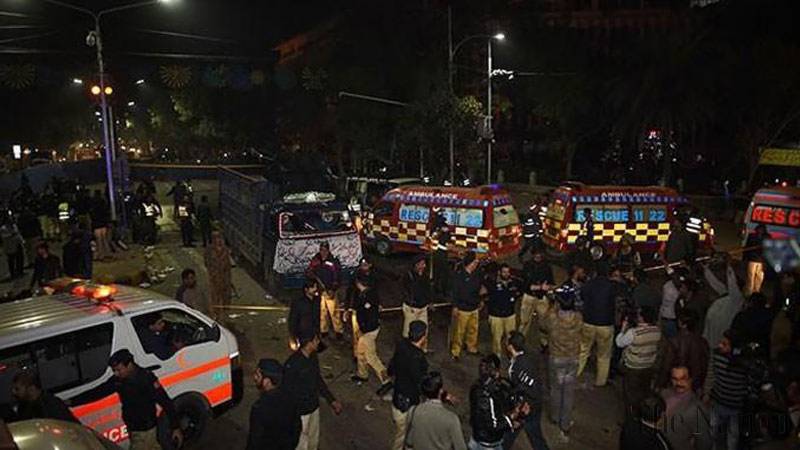 19 Feb 2017 – This week, the State and people of Pakistan have experienced one of the deadliest surges in extremism, over the recent years. Starting with a suicide attack in Lahore (which claimed the lives of senior police officials), and culminating with a bomb at Qalandar during the ritualistic dhamal, the people of Pakistan once again find themselves as victims of well-coordinated terrorist attacks.

But even as the hapless people of Pakistan are victims of this terrorism, it must be asked: is the State of Pakistan, and its leadership, a victim or a culprit?

Let us start with a few basic facts. During this past week, coordinated terrorist attacks have been carried out in each of the provinces of Pakistan. But the nature and tenor of these attacks have been different. The attack on Mall Road in Lahore was carried out (and claimed) by TTP/Jamat-ul-Ahrar, who are fundamentally opposed to the ideology of Pakistan, and the way of life of her people. And for this reason, the attack in Lahore targeted State officials (in this case, senior police officers). However, the attack in Baluchistan, according to initial investigation, finds root in an unholy alliance between anti-state terrorist elements as well as Balochi separatists. On the other hand, the attack in Sewan Sharif did not target the State or its institutions – it was focused, almost exclusively, on a genre of citizens (predominantly Shia) who have reverence for the greatest Sufi saint in the entire subcontinent. d that terrorism, at least in Pakistan, is a multi-headed dragon; one that cannot be killed with a single swing of the sword. Over the course of the last three decades, we have deluded ourselves as to how deep and entrenched the scrooge of terrorism festers in our society. Hiding behind the nomenclature of ‘sectarianism’, ‘provincialism’, ‘wahabism’, and a pristine image of noble ‘mujahideen’ fighters, we have avoided calling terrorists by their name. And for this reason, above all, this inertia towards declaring all forms of militancy as terrorism, for the past many years we have struggled to devise and implement a comprehensive counterterrorism strategy that acknowledges the various heads of terrorism, and attempts to eradicate each on its own turf.

During the past three years, owing primarily to the steel resolve of General Raheel Sharif, the State of Pakistan has focused its efforts on fighting two kinds of terrorist outfits: first, operation Zarb-e-Azb against the religious and ideological militant outfits, based mainly on the Pak-Afghan border; and second, against political militancy in the urban sprawl of Karachi. While these efforts of General Raheel Sharif are commendable, his three-year tenure did not allow enough time to complete the job. Pertinently, despite the killing of Malik Ishaq, our law enforcement agencies have not yet expanded the arena of war against terror in a manner that includes sectarian terror outfits.

This issue is particularly dire in the province of Punjab, where the PML-N Government seems to foster a soft corner for anti-Shia militant. To this end, the abdominal Law Minister of Punjab, Rana Sana Ullah, is on the record for having had close ties with Sipah-e-Sahaba Pakistan and (the late) Malik Ishaq. The unworthy Law Minister, even in the midst of the current terrorist surge, has continued to make statements about how Punjab has no terrorist networks, and specifically, about how sectarian terrorists are not enemies of the State of Pakistan.

To make matters worse, who can forget, some years ago, when the Chief Minister of Punjab made a statement that militant outfits should not carry out attacks in Punjab because ‘Punjab Government was not against them’.

In this context, the bombing at Sewan Sharif, which claimed the lives of 86 devotees of Qalandar, while injuring hundreds of others, must be seen through the lens of sectarian militancy. To this end, it is important to recall that three of the most recent (and severe) terrorist attacks in southern Pakistan – at an Imam Bargah in Sikharpur, at the shrine of Shah Noorani, and at the feet of Lal Shahbaz Qalandar – were all deliberately aimed at killing predominantly Shia population.

While on the point, it is also important to point out that, according to most estimates, the terrorist event at Sewan Sharif would only have killed half as many people (at best) if the injured had been provided adequate medical treatment, in a timely manner. Put another way, half of the deaths in Sewan Sharif occurred as a result of decades of bad governance across Sindh, where political dynasties have failed to provide even the most basic medical facilities in rural areas.

Specifically, Sewan Sharif, from where the incumbent Chief Minister of Sindh is elected, has only one district hospital, with no blood-bank, ambulances, first-aid/emergency workers, and just two doctors in the entire district. The closest (basic) hospital facility is at Hyderabad; it took two hours for an ambulance to reach Sewan Sharif from Hyderabad, and another two hours to bring the injured back to the hospital. As a result, a significant fraction of the injured victims died owing to blood loss, during the interregnum four hours. And, for the record, those gathered at Sewan Sharif, those participating bare-footed in the dhamal, were part of the most abject and hapless population of our country.

In the circumstances, we can no longer hide from a simple truth: the culprits of these terrorist attacks, to a large extent, are the political leaders. Those who sympathise with and protect sectarian terrorist outfits (read: PML-N), and those who have robbed this nation of even the most basic medical and first aid facilities (read: PPP). And, of course, all those who support them.

We can all choose to ignore this fact. We can continue in our silence, so as to not irk the political masters. We can, in Punjab, continue to treat the despicable Rana Sana Ullah (and his Chief Minister) with respect. We can, in Sindh, continue to bow and kiss the Chief Minister’s hand (or that of his leader). We can, all across Pakistan, continue to treat the Interior Minister (and his Prime Minister) with reverence. After all, throughout Islamic history, well meaning (impotent) people have lent support to cruel leaders.

But in our hearts, let us have no doubt, that the blood of the martyrs stains the hands of our political leadership. Maybe, in this world, we will only register a case against TTP and Jamat-ul-Ahrar. But in the next world – where truth will neither be diluted nor disowned – the FIR for these attacks will naamzad Rana Sana Ullah, Shehbaz Sharif, Ch. Nisar Ali Khan, Murad Ali Shah, Asif Zardari, Nawaz Sharif… and their supporters.

Saad Rasool is a lawyer based in Lahore. He has a Masters in Constitutional Law from Harvard Law School. He can be contacted at saad@post.harvard.edu.