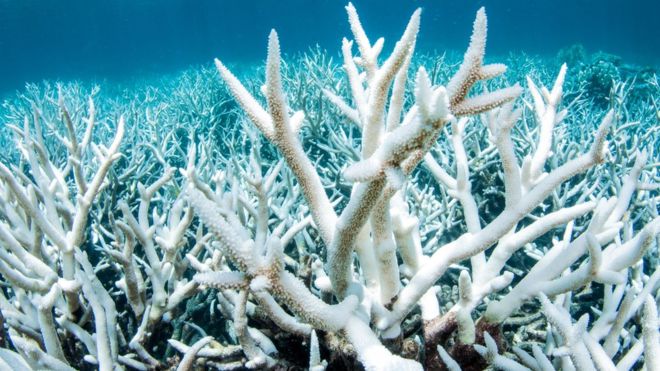 Australia’s Great Barrier Reef can be saved only if urgent steps are taken to reduce global warming, new research has warned.

16 Mar 2017 – Attempting to stop coral bleaching through any other method will not be sufficient, according to scientists.

The research, published in the journal Nature, said bleaching events should no longer be studied individually, but as threats to the reef’s survival.

“It all comes down to what the governments in Australia and around the world do in terms of mitigating further rises in temperatures.”

Last week, he said an aerial survey had shown evidence of mass bleaching in consecutive summers for the first time.

The scale of the damage will be examined in the next three weeks by the National Coral Bleaching Taskforce, a collaboration of scientists and reef managers.

Prof Pratchett said he remained optimistic the reef could recover, but the “window of opportunity” to curb emissions was closing.

“It’s the number one thing we need to think about now to save the reef,” he told the BBC.

Improving fishing practices or water quality would not be enough, he said.

The reef – a vast collection of thousands of smaller coral reefs stretching from the northern tip of Queensland to the state’s southern city of Bundaberg – was given World Heritage status in 1981.

The UN says it is the “most biodiverse” of all the World Heritage sites, and of “enormous scientific and intrinsic importance”.

Can super coral save the Great Barrier Reef?

Is the Great Barrier Reef coming to the end of its life?