These are my words; but THEY are not words of my making. These words, and the thoughts they embody, appear in timeless historical documents inspired by anti-war and anti-violence advocates.

The United States of America (USA) is engaged in Total War!”  “Total War” is not restricted to the USA. It is an old strategy designed to defeat a targeted population through the use of “any and all means.” The USA has used “total war” to not only defeat and subdue a targeted population or nation, but to destroy, annihilate, and humiliate a targeted foe’s historical traditions, languages, values, and potential for survival capable of resisting destruction.

“Total War” is a military-like strategy designed to win a war by engaging in assaults on “any and all” of a nation’s resources as legitimate military targets. This includes domination and control of media, entertainment, financial systems, and purchased leaders.

For the United States of America, “Total War” involves the direct and indirect exportation of USA popular culture, resulting in the “weaponization” of culture manifestations, representations, and expressions.  Exportation becomes a powerful way for invasion, occupation, dominance, and ascendancy of organizations, societies, and nations. Among the notable consequences “total war” via the exportation of USA popular culture are:

From the point of view of costs and military invasion, exportation of USA popular culture is an effective way to win! “Acculturation” becomes palatable when communicated as “modernization,” “progress,” and “change.”  It is “change,” but it is neither “modernization” nor “progress!”

Once USA popular culture is implanted in other nations, “Regime Change,” with the assistance of financial corruption and military control, becomes a predictable course. With bought pro-USA leaders, the USA controls a nation’s future. Indigenous cultures often disappear, population declines, local life forms become extinct, and natural resources become exploited. The “gift” of USA popular culture is often incompatible with human survival because it is based on exploitation.

USA residents sense they are captive to their own culture, yet appear unable to liberate themselves from the matrix of powerful events and forces. Amid pauses and respites from the comforts of pizza, wings, beer, shopping, TV football games, “unreality” shows, biased media, computer games, and omnipresent advertising, they sense something is wrong, but they feel powerless to escape. Agency is lost! Habits are difficult to break!  Go along! How long can it continue?

These elements are displayed graphically in Chart 1.   Each element of USA popular culture carries with it an explicit and implicit socialization power transcending invasion, occupation, dominance, and ascendancy. It is a colonization of mind, designed to erase and denigrate past.

As the cultures before the invasion of USA popular culture, disorders and deviancy emerge including alcoholism, prostitution, crime, family disintegration. Logo t-shirts emerge and become carriers of a new culture.  It is called, “identity with the aggressor.”

There are other symbolic, verbal, and material representations of USA popular culture including (1) USA exceptionalism; (2) “I did it my way mentality,” and (3) sexualization of advertising.  My point is made. Think about it!  Each day we are caught in a cultural web we openly criticize, and yet we cannot seem to escape.  Constant advertising keeps us confined to the advertising messages.

The power of USA popular culture is vast and complex. It has been exported to virtually all nations. It is a “war-like” invasion and occupation of a way-of-life, displacing and overwhelming existing cultural values and practices.  Even as the USA is subject to increasing criticism for its abusive and intrusive actions in the culture’s of other nations, USA leaders appear reluctant to accept criticism.  Like it or not, we won!” 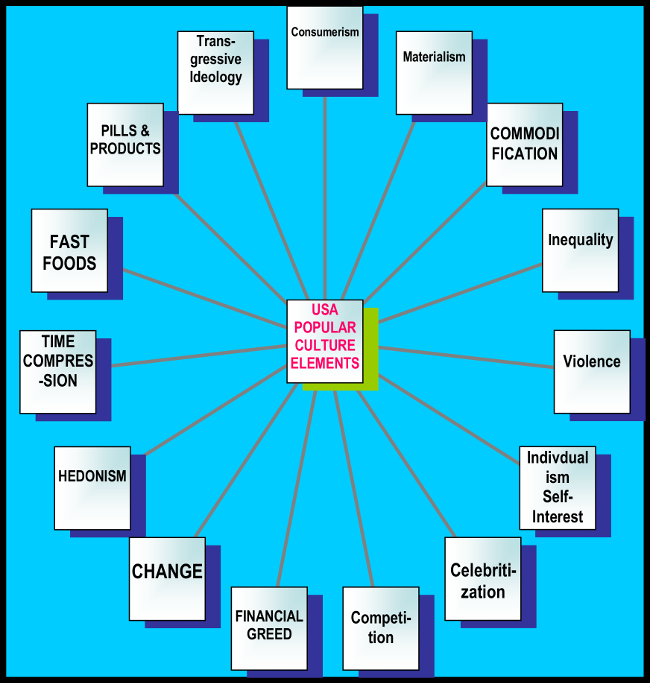 This article is part of a continuing series of publications I have authored on critiques and commentaries of USA foreign relations strategies, policies, and tactics. I have contended USA is engaged in immoral, unethical, and illegal actions, including war, invasion, occupation, and exploitation of foreign nations and people toward the promotion of USA global dominance, control, and supremacy. Examples of relevant articles follow:

Anticopyright: Editorials and articles originated on TMS may be freely reprinted, disseminated, translated and used as background material, provided an acknowledgement and link to the source, TMS: “Total War:” Weaponizing and Exporting USA Popular Culture, is included. Thank you.