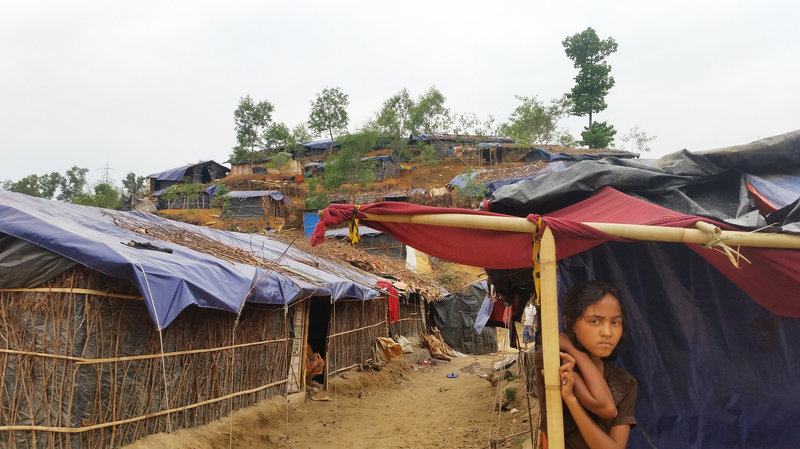 The Balukali refugee camp, located about an hour’s drive south of the seaside tourist city of Cox’s Bazar, is one of many informal camps in southern Bangladesh. An estimated 2,000 Rohingya families who fled neighboring Myanmar live in Balukali. Michael Sullivan for NPR

13 Apr 2017 – With her 8-year-old son’s head resting in her lap, Zubaida was sitting at home with some other women from her village in western Myanmar’s Rakhine state when the military came — and the gunfire started.

“All the men from the village started running away, and my son ran with them,” Zubaida, 25, says. He didn’t get far: Myanmar soldiers shot him dead — in the back.

That evening, the soldiers came back.

“They didn’t say anything,” she says. “They just came with their guns into my house.”

They raped her for almost an hour that time, Zubaida says. Two days later, the military returned and rounded up all the villagers. She says they separated the men from the women, beat the men and raped the women.

“Some tried to resist and got stabbed,” she says. “That’s why the rest of the women didn’t hesitate, they didn’t want to die.”

Zubaida was one of those picked.

Her distraught father pleaded with the soldiers: “Why are you doing this?”

“We are not doing as much to you as we have been ordered to do in Oula Para,” they replied, referring to a nearby village.

Both Zubaida’s village, Naiyongsong, and Oula Para are in far west Rakhine near the border with Bangladesh.

The villagers in this story have chosen to use pseudonyms to protect family members in Myanmar from possible retribution.

Zubaida and her neighbors are Rohingya — a group the U.N. has described as one of the world’s most persecuted people. The Muslim minority Rohingya have lived in mainly Buddhist Myanmar for centuries.

Even so, Myanmar’s government doesn’t consider the Rohingya to be citizens; it says they are immigrants from Bangladesh who are living in Myanmar illegally. About 1 million Rohingya live in Rakhine state, and they are almost entirely disenfranchised and need permission, for instance, to travel outside their own villages or to marry. Many are restricted to living in internment camps, segregated from the local Buddhist population. 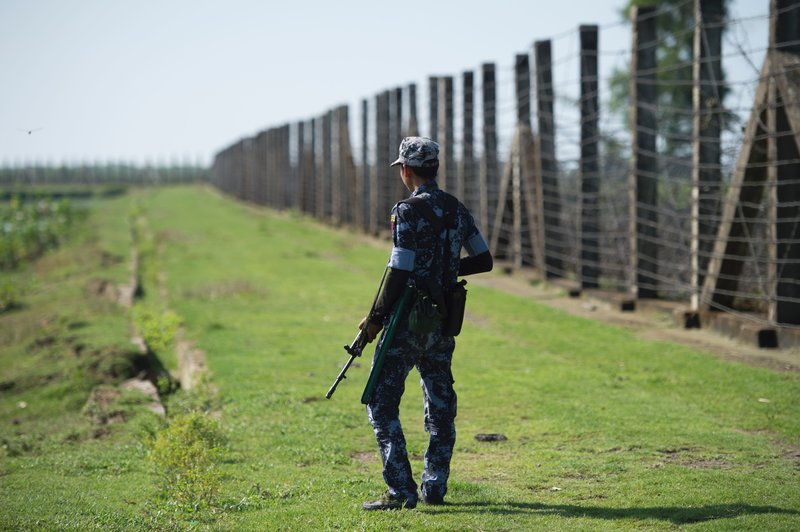 The attacks shocked and infuriated Myanmar’s military. And its response has been a brutal form of collective punishment that has not spared villagers, who are accused of aiding and abetting the militants.

What followed, witnesses and survivors say, was a campaign of murder, rape and arson. In the past six months, more than 70,000 Rohingya fled in terror across the border into neighboring Bangladesh — a Muslim-majority nation that has provided those who fled with refuge, but not acceptance.

This isn’t the first time the Rohingya have made that journey. In the late 1970s and early ’90s, hundreds of thousands fled violence in Myanmar. By some estimates, there are more than 500,000 Rohingya now living in Bangladesh — and more in Malaysia, Pakistan, Saudi Arabia and other Middle Eastern countries.

In Bangladesh, about 35,000 Rohingya live officially in two camps run by the government in tandem with the United Nations High Commissioner for Refugees. Hundreds of thousands more live, unofficially, in squatter camps like Balukali, where Zubaida lives now.

Home to some 17,000 people, Balukali is bleak. Small huts have been scraped out of the hillsides, with blue plastic sheeting for walls and roofs, held together by thin strips of bamboo. The homes sit amid pools of fetid water in a hilly area with little shade and lots of sand.

Zubaida’s tiny hut is barely big enough to stand in. At midday, it is stiflingly hot. 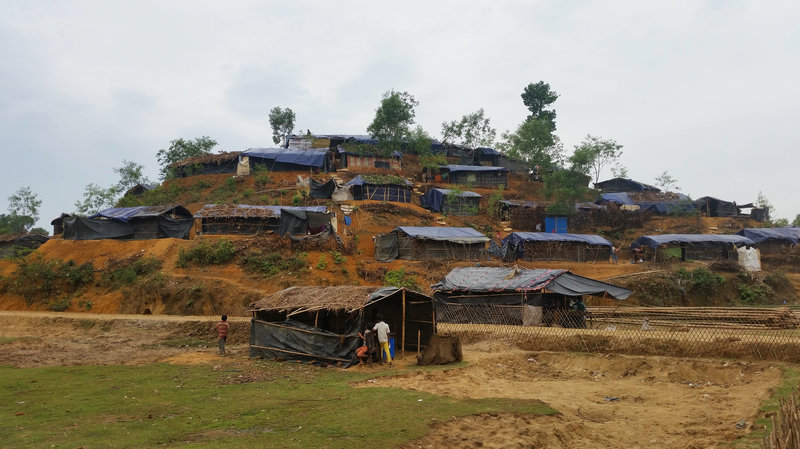 Small huts have been scraped out of the hillsides of the Balukali camp. Homes have blue plastic sheeting for walls, and roofs that are held together by thin strips of bamboo. Michael Sullivan for NPR

She recalls how the soldiers burned down a number of houses, as well as the mosque next to her house. After she was raped the second time, Zubaida says, she fled with her 5-year-old daughter, her parents and a couple of siblings, furtively making their way through the jungle until they reached what they thought was a place of safety near the river.

The military came there, too.

“The last rape took place in a school,” Zubaida says. “The women were separated after the men were taken away,” and then it all began again. 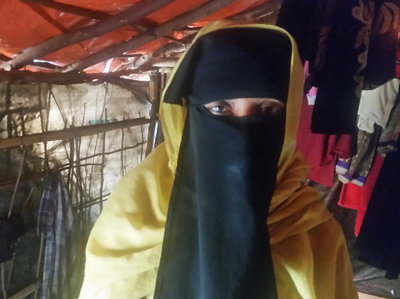 Zubaida, 25, is one of thousands of Rohingya to flee their homes during the latest crackdown on the Muslim minority group by the Myanmar Army. Michael Sullivan for NPR

She and her family finally made it across the river about a week after starting their journey.

Six years earlier, Zubaida’s husband, Mohammad, fled Myanmar by boat for Malaysia. The idea was to earn enough money to bring his family, too. Many others do the same, paying traffickers to make the often harrowing boat journey south to Thailand or Malaysia.

But Mohammad’s boat broke down and now he is at a U.N. facility in Indonesia waiting to be processed to a third country.

We reached him by phone at that facility in Medan, Indonesia. He was feeling guilty and powerless.

“I keep thinking if I had brought my wife and my son, I would not have lost my son and my wife would not have been raped,” Mohammad says. Now he is stuck in Indonesia, and Zubaida is stuck in Bangladesh. It’s not likely they’ll be reunited anytime soon.

Rape as a tool of war

NPR could not independently verify Zubaida’s story, as the Myanmar government has restricted access to northern Rakhine state. But we talked to a dozen other women from other villages whose stories were depressingly similar, as have the U.N., Human Rights Watch and others. These stories suggest the Myanmar military was following a familiar playbook when it launched its “counterinsurgency” operation in October.

“This is not something that has happened by rogue soldiers … a crime that was committed spontaneously,” says Matthew Smith, CEO of the advocacy group Fortify Rights, which focuses on Myanmar, Thailand and Malaysia.

“It’s very clear to us at this point that state security forces set out to systematically rape Rohingya women and girls,” he says.

Rape as a tool of war is not new: The Myanmar military has used it as a tactic against ethnic women, in particular, in other parts of the country for many years.

But what is different about the past six months, he says, is the scale of rape that took place within a relatively short period of time.

“There has been widespread and systematic rape in other ethnic states,” says Smith. “But there was an outburst of it, and particularly in November, that was unusual even by the Myanmar military’s brutal standards.”

The Myanmar military continues to deny the systematic attacks against the Rohingya — despite the testimony of dozens of witnesses, satellite photos showing hundreds of homes burned to the ground and disturbing videos uploaded to YouTube that show the military rounding up and beating Rohingya men. The Myanmar government did not respond to NPR’s requests for comment on these stories.

As for Myanmar’s de facto leader, Nobel laureate Aung San Suu Kyi has seemed oddly indifferent in her rare public comments on the violence against the Rohingya. In a recent interview with Singapore’s Channel News Asia, Suu Kyi told her interviewer: “I’m not saying there’s no difficulties. But it helps if people recognize the difficulties and focus on resolving instead of exaggerating them so that everything seems worse than it really is.”

And last week, she denied that the military’s action against the Rohingya amounted to ethnic cleansing. 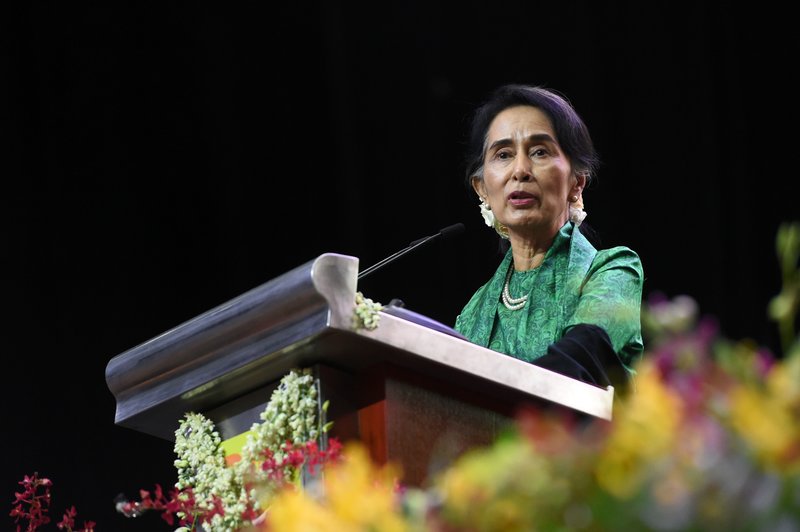 If this sounds odd coming from a Nobel laureate and onetime human rights champion, it shouldn’t. The general’s daughter has described herself as a politician long before she was a human rights champion. And in overwhelmingly Buddhist Myanmar, speaking out for the rights of a much-maligned Muslim minority doesn’t win votes.

But there’s another explanation, too: Suu Kyi has no control over the military. The country’s Constitution cements the military’s role and power indefinitely. Matthew Smith of Fortify Rights accepts this, but what he doesn’t accept is what Suu Kyi could have done but hasn’t.

Last month, the U.N.’s Human Rights Council said it would send a team to Myanmar to investigate the allegations of atrocities. Myanmar’s ambassador to the U.N. in Geneva, U Htin Lynn, called the resolution “not acceptable.”

“She’s claiming that there is no ethnic cleansing in this area,” says Robertson. “Our response to her would be that if there wasn’t such a big problem then why not allow the U.N. Human Rights Council fact-finding mission into those areas, provide them with unfettered access.”

“It’s time to get the investigators in there and actually do a professional independent investigation and get to the bottom of what happened,” he says.

There’s no indication Myanmar’s government will allow the fact-finding team into Rakhine state.

In the meantime, Myanmar has set up its own commission of inquiry, which is led by Vice President Myint Swe — a former army general.

VIDEO: Migrants Adrift in Andaman Sea after Thailand Turns Them Away

Barricaded In, Myanmar’s Rohingya Struggle to Survive in Ghettos and Camps