World Order and Disorder: The “Games” and “Gambles” of Life and Lives

Contrary to the widespread myth, nations are not the sole source of massive international political, economic, and social international events, forces, and changes. It is true the story of history is often told with nations as the grand hand behind unfolding events. Reality, however, is very different. Nations are merely one player among many players shaping history each day amid a complex crucible of “games and gambles” serving many interests.

The myth of “nation” determinism is encouraged by a select group of individuals, organizations, and nations who seek to hide their wealth, power, position, and privilege in shaping the world order and disorder. It is to their advantage to function as shadow forces, often beneath the mantle of nations. Their immediate visibility may be hidden, but their influence is profound. The players are displayed in Figure 1. 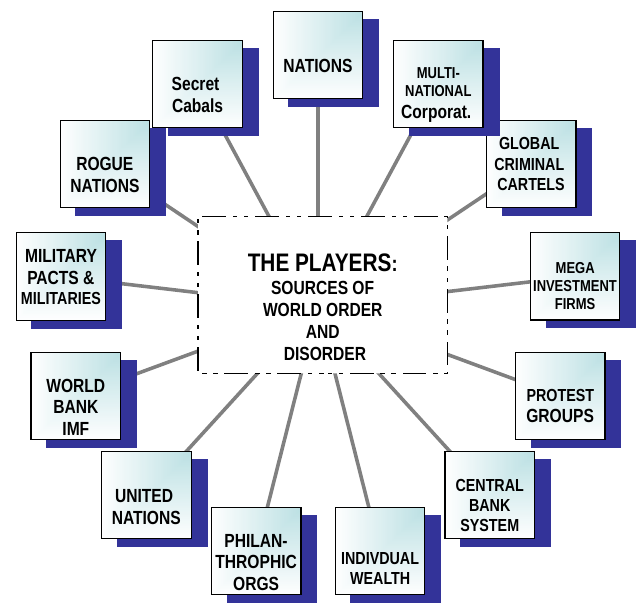 The question must be asked: Can any nation or groups of nations control and dominate the many powerful agencies, organizations, and rogue nations immune or resistant to a nation’s power? Have the times, which nurtured and now sustain, a new array of powers capable of cooperation or contention according to their interests, created a chaotic and desperate dance unresponsive to policies and strategies of control and domination once accepted as successful? A partially visible system now exists, dedicated to the preservation of powerful military-industrial-congressional complex, cited by President Eisenhower in his farewell address (January 17, 1961), as an emerging danger to our nation.

It is assumed nations will pursue the interests of their citizens and state. This too is a myth! What is accurate is certain powerful or rogue nations with access to unlimited military have the capacity to intervene at will to shape the world order through (1) imposed regime changes, (2) invasion and occupation, (3) war, death, destruction, (4) economic and financial controls, (5) sanctions, (6) cultural and religious systems, and (7) many other illegal and immoral policies and actions. Using secretive policies, strategies, and tactics, nations can become shills for private interests. But this Orwellian dystopian situation, relying heavily on military power and private wealth, is now leading the world toward disaster.

In today’s global community, many competing nations, and their hidden shadow groups, have access to military power and might. They also have access to other means of exercising power including economic, historic, moral, religious, and information communication technology (ICT). For the latter, the word and process becomes both a shield and weapon.

I must include “protest groups and factions” because they are present, and exercise some direct and indirect influence. Indeed, responses to these groups and factions (e.g., unions, abolish nuclear groups, Wall-Street protestors, environment activists, peace advocates) often require even more assertions of power and might by those in power. In this respect, the groups and factions are players, albeit often desperate amid their limited numbers and organizational stature.

The World Order: “Games” and “Gambles”

The seductive “games” and “gambles” to control and shape world order has been played for thousands of years by individuals, societies, and “nations.” The prize for winners: Empire! Global domination, control, and wealth! Why? With domination and control comes power to impose selfish interests on conquered people, regions, and societies. A certain “cache” is also sought! Etching the names of individuals, groups, and nations, amid the famous and infamous collection of empire, suggests “immortality.” We may despise those enshrined in history, but we cannot deny they remain alive in memory — now omnipresent in Google.

Even a passing knowledge of world history reveals the pursuit of “empire” has ancient roots (e.g., Egypt, Greece, Rome, China, Aztec, Inca, Ottoman, Mayan). The words of the romantic-era poet, Percy Bysshe Shelly’s (1792-1822), Ozymandias, capture the inevitable demise of empire. But while it lasts, it is an intoxicating and blinding stimulant, feeding heart and mind with the pleasures of adulation and comforts of power:

I met a traveler from a distant land, who said:
“Two vast and trunkless legs of stone
Stand in the desert . . .
Near them, on the sand,
Half-sunk, a shattered visage lies . . .
And on the pedestal these word appear:
“My name is Ozymandias, king of kings:
Look on my works ye mighty, and despair!”
Nothing beside remains
Round the decay of that colossal wreck,
Boundless and bare,
The lone and level sands stretch far away.”

The Pursuit of Empire

The pursuit of empire continues! Ozymandias embody the tragic impulse and result. Power, its inevitable rise and fall! No lessons learned! Only the deceptive rush of visions immune to reason! Empire remains the quest for nations and their private supporters seeking protection and opportunity. Empire is no longer confined to a sovereign state or nation. There are too many competing players. Most are unwilling to yield to a single supreme authority, but eager to use its mantle to pursue their interests.

As Figure 1 displays, the players in the “games” and “gambles” for world order and disorder, sow and protect their seeds. How can a sovereign nation control diverse powers having no loyalty to nation, but loyalty only to their own existence and security? Amid their privacy, they too often escape condemnation, but they too must know “empire” passes. Privatization, the preferred policy of the neo-liberal and neo-con establishments, provides an omnipresent petard on which to fall.

Is conspiracy present? Yes! Conspiracy is an attempt to hide, conceal, veil, or secrete actual events and forces from recognition. Conspiracies exist to serve special interests, contrary to interests and welfare of others. Conspiracies use an array of methods and tactics to elude attention, lest the methods and tactics be recognized as immoral, illegal, and dishonest or criminal. Recall, the villainous lies, deceit, and abuses used by the Bush-Cheney government to invade Iraq, and cast the Middle-East into flames: Iraq has nuclear weapons; we must use torture to obtain information; a global war on terrorism is necessary. With their actions, they indicted our nation, embedding us in endless war. Citizens became co-conspirators by our passive agreement (See Abby Martin interview with Lt. Colonel Wilkerson, former assistant to General Colin Powell, who was tricked into claiming Iraq had nuclear weapons (see https://forbiddenknowledgetv.net/The-Classic-Decay-of-Empires-US-Army-Colonel-Lawrence-Wilkerson/). Wilkerson points out the massive deceit used by a small group with access to power to launch the USA into a “total” global war.

The ubiquitous iconic “back room” of politics is not a myth! It exists and functions to maintain public ignorance, under the guise the public does not need to know, for it would not understand what we must do. The conspirators: En loco parentis! We act for your welfare by protecting our welfare. “Trust us! Trust us! If you do not, do not stand in our way!”

What tragedy! What a betrayal! What a despicable effort. This effort continues across the spectrum of “players” involved in the “games” and “gambles” of world order and disorder! The players have the political, economic, and military power to continue the “games” and “gambles.” They lack only moral justification. A tangled web of deceit!

Table 1 offers a list of policies and actions used by the world order players. It is frightening! These are not limited to nations or governments. They have become part of the options available to private individuals, groups, and commercial organizations. This is what is so frightening and dangerous! The foe and their methods escape visibility and prosecution. The justice systems normally relied upon to keep order and to protect, are part of the problem. There is an unbounded flow of mutual connections across the nations and groups via common board members, financial supporters, and shared visions of morality.

In Support of Nation and Other Organization Aims and Goals

What an array of possibilities! In a world of lawlessness, anything goes, and does! We remain in shock at the destructive events occurring across the world. Yet we too often ignore these events as consequences of the protected policies and actions of nations, individuals, private organizations, engaged in protecting their interests. Millions of lives and life are lost oblivious to the sorrow and grief exacted. Protected from harm, the perpetrators of harm are engaged in the “games” and “gambles” of world order and disorder. To what end?

Anthony J. Marsella, Ph.D., a member of the TRANSCEND Network, is a past president of Psychologists for Social Responsibility, emeritus professor of psychology at the University of Hawaii, and past director of the World Health Organization Psychiatric Research Center in Honolulu. He is known nationally and internationally as a pioneer figure in the study of culture and psychopathology who challenged the ethnocentrism and racial biases of many assumptions, theories, and practices in psychology and psychiatry. In more recent years, he has been writing and lecturing on peace and social justice. He has published 15 edited books, and more than 250 articles, chapters, book reviews, and popular pieces. He can be reached at marsella@hawaii.edu.

Anticopyright: Editorials and articles originated on TMS may be freely reprinted, disseminated, translated and used as background material, provided an acknowledgement and link to the source, TMS: World Order and Disorder: The “Games” and “Gambles” of Life and Lives, is included. Thank you.

One Response to “World Order and Disorder: The “Games” and “Gambles” of Life and Lives”