Endless Atrocities: The US Role in Creating the North Korean Fortress-State 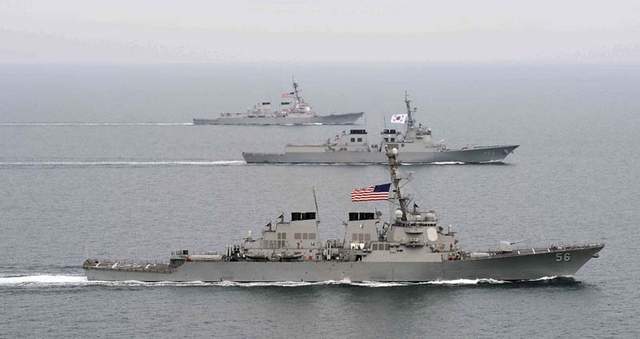 26 Apr 2017 – Paul Atwood, a Senior Lecturer in American Studies at the University of Massachusetts Boston, provides a concise summary of the history that informs North Korea’s “relations with the United States” and “drives its determination never to submit to any American diktat”.

Excerpts from Atwood’s summary are here used as a framework, with other sources where indicated.

Atwood notes it is an American “myth” that the “North Korean Army suddenly attacked without warning, overwhelming surprised ROK defenders.”  In fact, the North/South border “had been progressively militarized and there had been numerous cross border incursions by both sides going back to 1949.”

Part of what made the US’s ultimate destruction of Korea (which involved essentially a colossal version of one of the cross-border incursions) “inevitable” was the goal of US planners to access or control “global… resources, markets and cheaper labor power”.

In its full invasion of the North, the US acted under the banner of the United Nations.  However, the UN at that time was “largely under the control of the United States”, and as Professor Carl Boggs (PhD political science, UC Berkeley) puts it, essentially was the United States. (*)   While it is still today the world’s most powerful military empire, the US was then at the peak of its global dominance – the most concentrated power-center in world history.  Almost all allies and enemies had been destroyed in World War II while the US strategically preserved its forces, experiencing just over 400,000 overall war-related deaths after Germany and Japan declared war on the US, whereas Russia, for example, lost tens of millions fending off the Nazi invasion.  Boggs further notes that as the UN gradually democratized, US capacity to dictate UN policy waned, with the US soon becoming the world leader in UN vetoes. (154)

In South Korea, “tens of thousands” of “guerrillas who had originated in peoples’ committees” in the South “fought the Americans and the ROK” (Republic of Korea), the Southern dictatorship set up by the US.  Before hot war broke out, the ROK military “over mere weeks” summarily executed some 100,000 to 1 million (74) (S. Brian Wilson puts the figure at 800,000) guerillas and peasant civilians, many of whom the dictatorship lured into camps with the promise of food.  This was done with US knowledge and sometimes under direct US supervision, according to historian Kim Dong-choon and others (see Wilson above for more sources).  The orders for the executions “undoubtedly came from the top”, which was dictator Syngman Rhee, the “US-installed” puppet, and the US itself, which “controlled South Korea’s military.”  After the war, the US helped try to cover up these executions, an effort that largely succeeded until the 1990s.

At a point in the war when the US was on the verge of defeat, General Douglas MacArthur “announced that he saw unique opportunities for the deployment of atomic weapons. This call was taken up by many in Congress.”  Truman rejected this idea and instead “authorized MacArthur to conduct the famous landings at Inchon in September 1950”, which “threw North Korean troops into disarray and MacArthur began pushing them back across the 38th Parallel”, the line the US had “arbitrarily” drawn to artificially divide Korea, where there was “overwhelming support for unification” among the country’s population as a whole.  The US then violated its own artificial border and pushed into the North.

China warned the US it would not sit by while the its neighbor was invaded (China itself also feared being invaded), but MacArthur shrugged this off, saying if the Chinese “tried to get down to Pyongyang” he would “slaughter” them, adding, “we are the best.”  MacArthur “then ordered airstrikes to lay waste thousands of square miles of northern Korea bordering China and ordered infantry divisions ever closer to its border.”

It was the terrible devastation of this bombing campaign, worse than anything seen during World War II short of Hiroshima and Nagasaki that to this day dominates North Korea’s relations with the United States and drives its determination never to submit to any American diktat.

General Curtis Lemay directed this onslaught. It was he who had firebombed Tokyo in March 1945 saying it was “about time we stopped swatting at flies and gone after the manure pile.” It was he who later said that the US “ought to bomb North Vietnam back into the stone age.” Remarking about his desire to lay waste to North Korea he said “We burned down every town in North Korea and South Korea too.” Lemay was by no means exaggerating.

Lemay estimated the US “killed off” some “20% of the [North Korean] population.”  (For comparison, the highest percentage of population lost in World War II was in Poland, which lost approximately 16.93 to 17.22% of its people overall.)  Dean Rusk, who later became a Secretary of State, said the US targeted and attempted to execute every person “that moved” in North Korea, and tried to knock over “every brick standing on top of another.”

Boggs gives many examples of mass atrocities, one taking place in 1950 when the US rounded up “nearly 1,000 civilians” who were then “beaten, tortured, and shot to death by US troops”, another in Pyongyang when the US summarily executed 3,000 people, “mostly women and children”, and another when the US executed some 6,000 civilians, many with machine guns, many by beheading them with sabers.  He notes this list, just of the major atrocities, “goes on endlessly.” (75)

US/UN forces in Korea in tanks painted to look like tigers.

When Chinese forces followed through on their threat and entered North Korea, successfully pushing back US troops, Truman then threatened China with nuclear weapons, saying they were under “active consideration.” For his part, “MacArthur demanded the bombs… As he put it in his memoirs:

I would have dropped between thirty and fifty atomic bombs…strung across the neck of Manchuria…and spread behind us – from the Sea of Japan to the Yellow Sea- a belt of radioactive cobalt. It has an active life of between 60 and 120 years.

Cobalt it should be noted is at least 100 times more radioactive than uranium.

He also expressed a desire for chemicals and gas.

In 1951 the U.S. initiated “Operation Strangle”, which officials estimated killed at least 3 million people on both sides of the 38th parallel, but the figure is probably closer to 4 million [“mostly civilians” and “mostly resulting from US aerial bombardments” in which civilians “were deliberately targeted” (54, 67-8), as were “schools, hospitals, and churches” (65).  Estimates for the death toll also go “much higher” than 4 million (74)].

Boggs notes US propaganda during this time period (the US was a world leader in eugenics scholarship and race-based “legal” discrimination) dehumanized Asians and facilitated targeting and mass executions of “inferior” civilians: the “US decision to target civilians … was planned and systematic, going to the top of the power structure. …no one was ever charged…”  Some in the US forces, such as General Matthew Ridgeway, claimed the war was a Christian jihad in defense of “God”.  (54-5)  Analysts at George Washington University, looking at US contingency plans from this era to wipe out much of the world’s population with nuclear weapons, determined a likely rationale for the US’s doctrine of targeting of civilians is to “reduce the morale of the enemy civilian population through fear” – the definition of terrorism.

The question of whether the U.S. carried out germ warfare has been raised but has never been fully proved or disproved. The North accused the U.S. of dropping bombs laden with cholera, anthrax, plague, and encephalitis and hemorrhagic fever, all of which turned up among soldiers and civilians in the north. Some American prisoners of war confessed to such war crimes but these were dismissed as evidence of torture by North Korea on Americans. However, none of the U.S. POWs who did confess and were later repatriated were allowed to meet the press. A number of investigations were carried out by scientists from friendly western countries. One of the most prominent concluded the charges were true.

Boggs notes the US “had substantial stocks of biological weapons” and US leaders thought they might be able to keep their use “secret enough to make a plausible denial”.  They also thought that if their use was uncovered, the US could simply remind its accusers that it had never signed the 1925 Geneva Protocol on biological warfare. (135-6)

A 1952 US government film made to instruct the US armed forces on the US’s “offensive biological and chemical warfare program” says the US can “deliver a biological or chemical attack … hundreds of miles inland from any coastline” to “attack a large portion of an enemy’s population.”  The film shows US soldiers filling bio/chemical dispersal containers for “contamination” of enemy areas, and then a cartoon depiction of US bio/chem weapons agents being delivered from US ships, passing over Korea, and covering huge swathes of China.

Boggs notes “the US apparently hoped the rapid spread of deadly diseases would instill panic in Koreans and Chinese, resulting in a collapse of combat morale”. (136)

Atwood adds that as in the case of the Rhee/US mass executions of South Koreans, Washington blamed the evident use of germ warfare on “the communists”.

The US also used napalm, a fiery gel that sticks to and burns through targets,

…extensively, completely and utterly destroying the northern capital of Pyongyang. By 1953 American pilots were returning to carriers and bases claiming there were no longer any significant targets in all of North Korea to bomb. In fact a very large percentage of the northern population was by then living in tunnels dug by hand underground. A British journalist wrote that the northern population was living “a troglodyte existence.” In the Spring of 1953 US warplanes hit five of the largest dams along the Yalu river completely inundating and killing Pyongyang’s harvest of rice. Air Force documents reveal calculated premeditation saying that “Attacks in May will be most effective psychologically because it was the end of the rice-transplanting season before the roots could become completely embedded.” Flash floods scooped out hundreds of square miles of vital food producing valleys and killed untold numbers of farmers.

At Nuremberg after WWII, Nazi officers who carried out similar attacks on the dikes of Holland, creating a mass famine in 1944, were tried as criminals and some were executed for their crimes.

Atwood concludes it is “the collective memory” of the above “that animates North Korea’s policies toward the US today”.

Under no circumstances could any westerner reasonably expect … that the North Korean regime would simply submit to any ultimatums by the US, by far the worst enemy Korea ever had measured by the damage inflicted on the entirety of the Korean peninsula.

Robert J. Barsocchini is an independent researcher and reporter whose interest in propaganda and global force dynamics arose from working as a cross-cultural intermediary for large corporations in the US film and television industry.  His work has been cited, published, or followed by numerous professors, economists, lawyers, military and intelligence veterans, and journalists.  He begins work on a Master’s Degree in American Studies in the fall.

2 Responses to “Endless Atrocities: The US Role in Creating the North Korean Fortress-State”