Why Do North Koreans Hate Us? One Reason: They Remember the Korean War 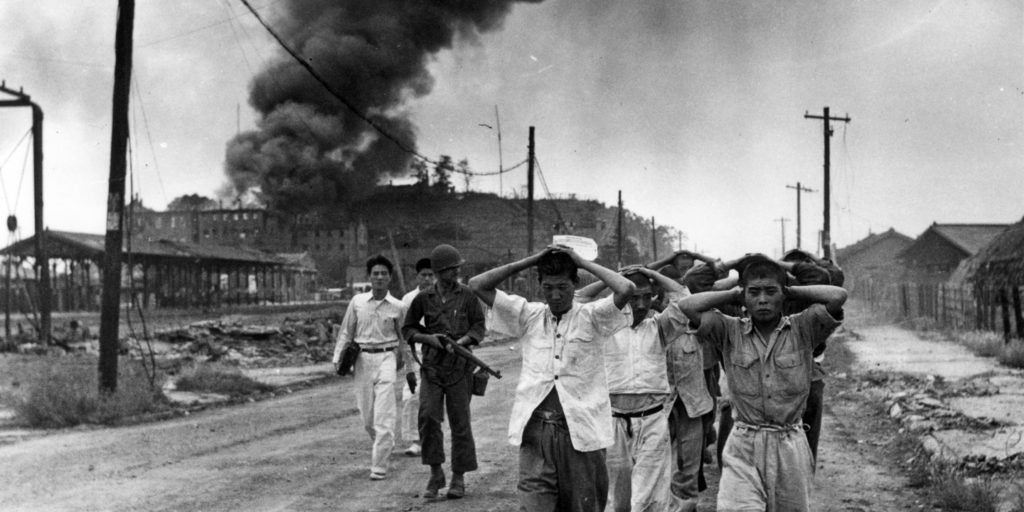 It’s a question that has bewildered Americans again and again in the wake of 9/11, in reference to the Arab and Muslim worlds. These days, however, it’s a question increasingly asked about the reclusive North Koreans.

Let’s be clear: There is no doubt that the citizens of the Democratic People’s Republic of Korea both fear and loathe the United States. Paranoia, resentment, and a crude anti-Americanism have been nurtured inside the Hermit Kingdom for decades. Children are taught to hate Americans in school while adults mark a “Struggle Against U.S. Imperialism Month” every year (it’s in June, in case you were wondering).

North Korean officials make wild threats against the United States while the regime, led by the brutal and sadistic Kim Jong-un, pumps out fake news in the form of self-serving propaganda, on an industrial scale. In the DPRK, anti-American hatred is a commodity never in short supply.

“The hate, though,” as longtime North Korea watcher Blaine Harden observed in the Washington Post, “is not all manufactured.” Some of it, he wrote, “is rooted in a fact-based narrative, one that North Korea obsessively remembers and the United States blithely forgets.”

Forgets as in the “forgotten war.” Yes, the Korean War. Remember that? The one wedged between World War II and the Vietnam War? The first “hot” war of the Cold War, which took place between 1950 and 1953, and which has since been conveniently airbrushed from most discussions and debates about the “crazy” and “insane” regime in Pyongyang? Forgotten despite the fact that this particular war isn’t even over — it was halted by an armistice agreement, not a peace treaty — and despite the fact that the conflict saw the United States engage in numerous war crimes, which, perhaps unsurprisingly, continue to shape the way North Koreans view the United States, even if the residents of the United States remain blissfully ignorant of their country’s belligerent past.

For the record, it was the North Koreans, and not the Americans or their South Korean allies, who started the war in June 1950, when they crossed the 38th Parallel and invaded the south. Nevertheless, “What hardly any Americans know or remember,” University of Chicago historian Bruce Cumings writes in his book “The Korean War: A History,” “is that we carpet-bombed the north for three years with next to no concern for civilian casualties.”

How many Americans, for example, are aware of the fact that U.S. planes dropped on the Korean peninsula more bombs — 635,000 tons — and napalm — 32,557 tons — than during the entire Pacific campaign against the Japanese during World War II?

How many Americans know that “over a period of three years or so,” to quote Air Force Gen. Curtis LeMay, head of the Strategic Air Command during the Korean War, “we killed off … 20 percent of the population”?

Twenty. Percent. For a point of comparison, the Nazis exterminated 20 percent of Poland’s pre-World War II population. According to LeMay, “We went over there and fought the war and eventually burned down every town in North Korea.”

Every. Town. More than 3 million civilians are believed to have been killed in the fighting, the vast majority of them in the north. 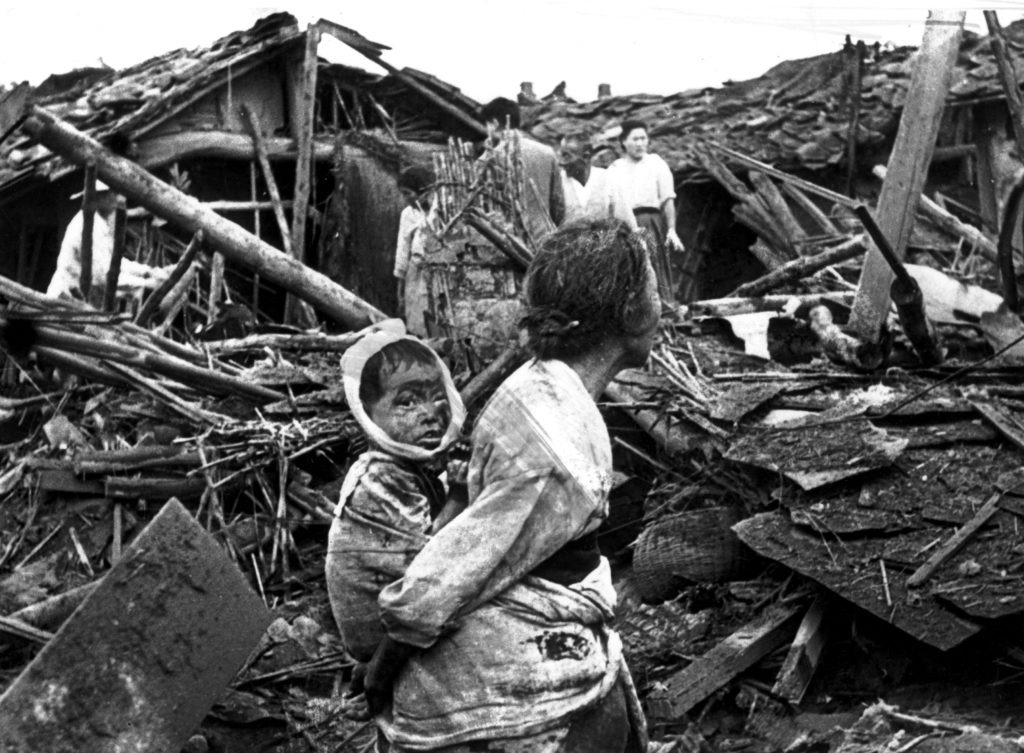 An elderly woman and her grandchild wander among the debris of their wrecked home in the aftermath of an air raid by U.S. planes over Pyongyang, the Communist capital of North Korea, circa 1950.
Photo: Keystone/Getty Images

How many Americans are familiar with the statements of Secretary of State Dean Rusk or Supreme Court Justice William O. Douglas? Rusk, who was a State Department official in charge of Far Eastern affairs during the Korean War, would later admit that the United States bombed “every brick that was standing on top of another, everything that moved.” American pilots, he noted, “were just bombing the heck out of North Korea.”

Douglas visited Korea in the summer of 1952 and was stunned by the “misery, disease, pain and suffering, starvation” that had been “compounded” by air strikes. U.S. warplanes, having run out of military targets, had bombed farms, dams, factories, and hospitals. “I had seen the war-battered cities of Europe,” the Supreme Court justice confessed, “but I had not seen devastation until I had seen Korea.”

How many Americans have ever come across Gen. Douglas MacArthur’s unhinged plan to win the war against North Korea in just 10 days? MacArthur, who led the United Nations Command during the conflict, wanted to drop “between 30 and 50 atomic bombs … strung across the neck of Manchuria” that would have “spread behind us … a belt of radioactive cobalt.”

How many Americans have heard of the No Gun Ri massacre, in July 1950, in which hundreds of Koreans were killed by U.S. warplanes and members of the 7th U.S. Cavalry regiment as they huddled under a bridge? Details of the massacre emerged in 1999, when the Associated Press interviewed dozens of retired U.S. military personnel. “The hell with all those people,” one American veteran recalled his captain as saying. “Let’s get rid of all of them.”

How many Americans are taught in school about the Bodo League massacre of tens of thousands of suspected communists on the orders of the U.S.-backed South Korean strongman, President Syngman Rhee, in the summer of 1950? Eyewitness accounts suggest “jeeploads” of U.S. military officers were present and “supervised the butchery.”

Millions of ordinary Americans may suffer from a toxic combination of ignorance and amnesia, but the victims of U.S. coups, invasions, and bombing campaigns across the globe tend not to. Ask the Iraqis or the Iranians, ask the Cubans or the Chileans. And, yes, ask the North Koreans.

For the residents of the DPRK, writes Columbia University historian Charles Armstrong in his book “Tyranny of the Weak: North Korea and the World, 1950-1992,” “the American air war left a deep and lasting impression” and “more than any other single factor, gave North Koreans a collective sense of anxiety and fear of outside threats, that would continue long after the war’s end.”

Don’t get me wrong: I’m not pretending that Kim’s violent and totalitarian regime would be any less violent or totalitarian today had the U.S. not carpet-bombed North Korea almost 70 years ago. Nor am I expecting Donald Trump, of all presidents, to offer a formal apology to Pyongyang on behalf of the U.S. government for the U.S. war crimes of 1950 through 1953.

But the fact is that inside North Korea, according to leading Korea scholar Kathryn Weathersby, “it is still the 1950s … and the conflict with South Korea and the United States is still going on. People in the North feel backed into a corner and threatened.”

If another Korean war, a potentially nuclear war, is to be avoided and if, as the Czech-born novelist Milan Kundera famously wrote, “the struggle of man against power is the struggle of memory against forgetting,” then ordinary Americans can no longer afford to forget the death, destruction, and debilitating legacy of the original Korean War.

Related: North Korea Wants to Convince the World It Can Nuke Hawaii – Donald Trump Is Happy to Oblige

One Response to “Why Do North Koreans Hate Us? One Reason: They Remember the Korean War”