A 50-Year Occupation: Israel’s Six-Day War Started with a Lie 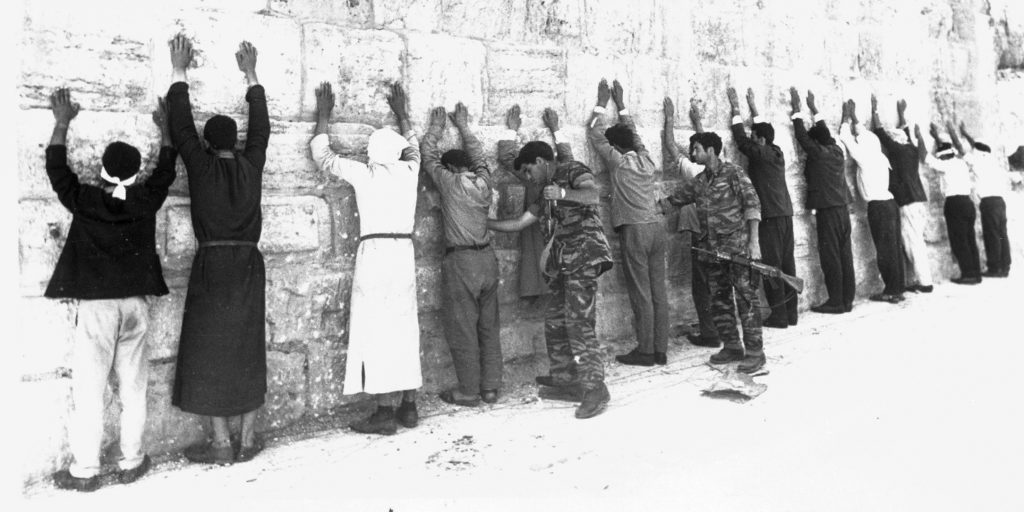 Israeli soldiers search Jordanian prisoners during mopping up operations in the old city of Jerusalem on June 8, 1967, as the city came under Jewish control during the Six-Day War. Photo: AP

5 Jun 2017 – Fifty years ago, between June 5 and June 10, 1967, Israel invaded and occupied East Jerusalem, the West Bank, the Gaza Strip, and the Golan Heights. The Six-Day War, as it would later be dubbed, saw the Jewish David inflict a humiliating defeat on the Arab Goliath, personified perhaps by Gamal Abdel Nasser’s Egypt.

“The existence of the Israeli state hung by a thread,” the country’s prime minister, Levi Eshkol, claimed two days after the war was over, “but the hopes of the Arab leaders to annihilate Israel were dashed.” Genocide, went the argument, had been prevented; another Holocaust of the Jews averted.

There is, however, a problem with this argument: It is complete fiction, a self-serving fantasy constructed after the event to justify a war of aggression and conquest. Don’t take my word for it: “The thesis according to which the danger of genocide hung over us in June 1967, and according to which Israel was fighting for her very physical survival, was nothing but a bluff which was born and bred after the war,” declared Gen. Matituahu Peled, chief of logistical command during the war and one of 12 members of Israel’s General Staff, in March 1972.

A year earlier, Mordechai Bentov, a member of the wartime government and one of 37 people to sign Israel’s Declaration of Independence, had made a similar admission. “This whole story about the threat of extermination was totally contrived, and then elaborated upon, a posteriori, to justify the annexation of new Arab territories,” he said in April 1971.

Even Israeli Prime Minister Menachem Begin, former terrorist and darling of the Israeli far right, conceded in a speech in August 1982 that “in June 1967 we had a choice. The Egyptian army concentrations in the Sinai approaches did not prove that Nasser was really about to attack us. We must be honest with ourselves. We decided to attack him.”

The reverberations of that attack are still being felt in the Middle East today. Few modern conflicts have had as deep and long-lasting an impact as the Six-Day War. As U.S. academic and activist Thomas Reifer has observed, it sounded the “death knell of pan-Arab nationalism, the rise of political Islam … a more independent Palestinian nationalism” and “Israel’s emergence as a U.S. strategic asset, with the United States sending billions of dollars … in a strategic partnership unequalled in world history.”

Above all else, the war, welcomed by the London Daily Telegraph in 1967 as “the triumph of the civilized,” forced another 300,000 Palestinians from their homes and ushered in a brutal military occupation for the million-odd Palestinians left behind.

The conflict itself may have lasted only six days, but the occupation that followed is now entering its sixth decade — the longest military occupation in the world. Apologists for Israel often deny that it is an occupation and say the Occupied Territories are merely “disputed,” a disingenuous claim belied by Israel’s own Supreme Court, which ruled in 2005 that the West Bank is “held by the State of Israel in belligerent occupation.”

Fifty long years of occupation; of dispossession and ethnic cleansing; of house demolitions and night curfews; of checkpoints, walls, and permits.

Fifty years of bombings and blockades; of air raids and night raids; of “targeted killings” and “human shields”; of tortured Palestinian kids.

Fifty years of racial discrimination and ethnic prejudice; of a “separate but unequal” two-tier justice system for Palestinians and Israelis; of military courts and “administrative detention.”

Fifty years of pointless negotiations and failed peace plans: Allon, Rogers, Fahd, Fez, Reagan, Madrid, Oslo, Wye River, Camp David, Taba, Red Sea, Annapolis. What did they deliver for the occupied Palestinians? Aside from settlements, settlements, and more settlements? Consider: In 1992, a year before the Oslo peace process began, West Bank settlements covered 77 kilometers and housed 248,000 Israeli settlers. By 2016, those settlements covered 197 kilometers and the number of settlers living in them had more than tripled to 763,000.

These settlements have rendered the much-discussed “two-state solution” almost impossible. The occupied West Bank has been carved up into a series of bantustans, cut off from each other and the wider world. The settlers are not going anywhere, anytime soon. They are Israel’s “facts on the ground.” To ignore them is to ignore perhaps the biggest obstacle to ending the occupation. “It’s like you and I are negotiating over a piece of pizza,” the Palestinian-American lawyer and former adviser to the PLO, Michael Tarazi, explained in 2004. “How much of the pizza do I get? And how much do you get? And while we are negotiating it, you are eating it.” 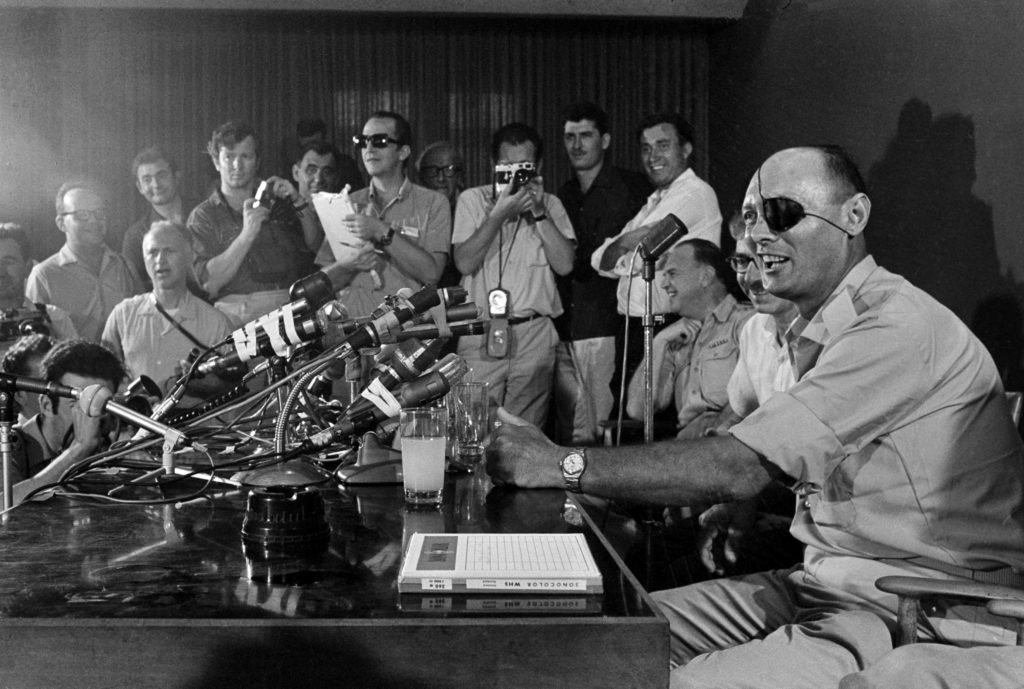 Gen. Moshe Dayan talks to reporters in Tel Aviv during his first news conference, June 3, 1967, after taking the post of Minister of Defense. Photo: AP

It wasn’t just the 1967 war that was launched on a lie; so too was the occupation that began after it. It was never supposed to be temporary, nor were the Palestinians ever supposed to get their land back. If Israel had planned to withdraw from the Occupied Territories, as some of its supporters suggest, then why was the first settlement in the West Bank, Kfar Etzion, established less than four months after the Six-Day War, in defiance of “top-secret” advice from the Israeli Foreign Ministry’s legal adviser that “civilian settlement” in the territories would contravene “the explicit provisions of the Fourth Geneva Convention”? Why has it revoked the residency rights of hundreds of thousands of Palestinians from Gaza and the West Bank over the past 50 years? Why has the Jewish state spent the past five decades exploiting the charade of a “peace process” to gobble up more Palestinian land and build more illegal settlements? The truth is that the Jewish state, from the very beginning, “used negotiations as a smokescreen to advance its colonial project,” to borrow a line from imprisoned Palestinian militant and activist Marwan Barghouti. Fifty years on, it is time for both the Palestinian leadership and the international community to stop pretending otherwise.

The legendary Israeli general and Defense Minister Moshe Dayan, who was one of the architects of Israel’s victory in 1967 and was adamant that the country should hold onto the territories it had seized, best summed up the cynical attitude of Israeli governments of both right and left over the past five decades. “The only peace negotiations,” pronounced Dayan, when asked about the possibility of a peace deal with the Palestinians in November 1970, “are those where we settle the land and we build, and we settle, and from time to time we go to war.”