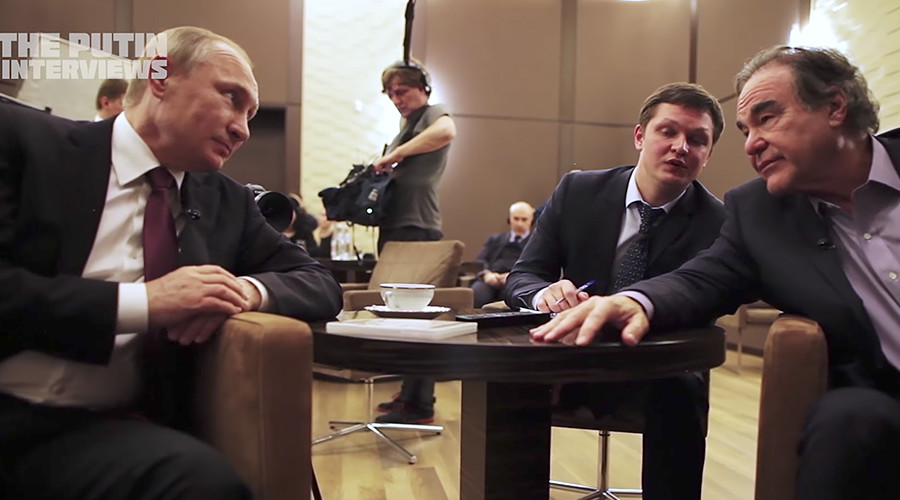 16 Jun 2017 – Oliver Stone’s documentary series on Vladimir Putin, you would think, is required viewing for Western audiences looking to see beyond the crude caricature of Russia’s president in order to gain an insight into his worldview.

Indeed, surely such an insight is absolutely necessary, what with Russia being the biggest country in Europe, a major nuclear power, and with the deepening tensions arising from Russia’s geostrategic differences and rivalry with Washington in recent years.

Yet for the Western liberal commentariat, condemnation rather than understanding is the order of the day, evidenced in the barrage of criticism with which Stone’s documentary series on the Russian leader has been received in the Western mainstream.

The interview the filmmaker did with liberal US talk show host Stephen Colbert on his project is a prime example.

Colbert’s line of questioning amounted to a regurgitation of the very caricature that Stone had set out to move beyond in over 20 hours of interviews on an abundance of topics with Putin – his upbringing, family history, career, thoughts on leadership, the challenges Russia faced during the dark days of the 1990s, his relations with various US presidents, NATO, and so on.

Yet for the likes of Mr. Colbert it’s much easier to go with the official narrative, contained in his first question of the interview: “What do you say to people who say that yours [Oliver Stone’s] is a fawning interview of a brutal dictator?” Not only the question, but also the casual and insouciant way in which it was delivered, confirmed the dumbing-down of news information, analysis and commentary that has been underway in the United States over decades.

The result is a culture so intellectually shallow it is frightening to behold, one in which ignorance is celebrated rather than scorned, in which national exceptionalism and arrogance is exalted rather than rejected. And woe betide anyone, such as Oliver Stone, who dares try to penetrate this fog of ignorance and sense of exceptionalism that has so corroded US cultural values.

Read more: ‘Russia will not let itself be turned into caliphate’ – Putin on fighting ISIS in Syria

Listening to Colbert’s studio audience laugh at Stone in response to his statement that Putin had been unfairly treated and abused by the US media, I was minded of the treatment meted out to the ancient Greek philosopher Socrates. Such a comparison is not as outlandish as some may think on first impressions.

Think about it: for daring to question the prevailing orthodoxy, received truths, and dominant ideas the philosopher was lampooned, ridiculed and ultimately condemned to death by the powers that be in Athens, considered at the time to be the home of democracy and liberty, just as Washington is – or to be more accurate claims that it is – in our time.

Interestingly, the clamor to condemn Socrates took place when tensions between Athens and its Greek city-state rival and adversary, Sparta, were still high just a few years after the end of the Peloponnesian War (431-404 BC).

As everybody knows, in times of war – whether cold or hot – a nation’s tolerance for dissent, for daring to swim against the cultural tide, evaporates, even though it is precisely at such times when dissent is most necessary. After all, in the case of the rising tensions that we have witnessed between Russia and the US recently, it is not people like Stephen Colbert who will be sent into combat should those tensions spill over into direct military conflict.

With this in mind, perhaps it would have been more to the talk show host’s benefit to have listened carefully to a man, in Oliver Stone, who has experienced combat, and who does have first-hand experience of a devastating war unleashed in the cause of the very national exceptionalism previously described.

As a filmmaker, Oliver Stone’s body of work, reaching all the way back to the 1980s, is a testament to his integrity both as an artist and as a human being. From ‘Salvador’ in 1986, an unflinching expose of covert US support for right-wing death squads in El Salvador, all the way up to his latest movie ‘Snowden’ in 2016, which tells the story of US intelligence whistleblower Edward Snowden, this is a filmmaker with a fierce passion for truth. As such, it is a fair bet that in generations to come his works will still command respect and serious analysis. Could we say the same about Stephen Colbert’s body of work?

To ask the question is to answer it.

‘Carthago delenda est’ – Carthage must be destroyed. These words of Cato the Elder, which the Roman statesman and orator is said to have repeated at the conclusion of every one of his speeches, is the sentiment behind the campaign of demonization against Vladimir Putin that is a feature of Western cultural life.

It has become so pervasive and obsessive you would think that it was the Russian leader who had the destruction of entire countries on his record and conscience – i.e. Afghanistan, Yugoslavia, Iraq and Libya – and that it was his foreign policy that had killed more people and sown more chaos than at any time since World War II.

Oliver Stone is to be commended for trying to wake America up to the damage it does and has done around the world over many decades. Those who would attack and laugh at him for doing so merely confirm the degeneration of a culture built on foundations not of wisdom, but of crass ignorance.