“The mass of men lead lives of quiet desperation. What is called resignation is confirmed desperation. . . . A stereotyped but unconscious despair is concealed even under what are called games of amusement and amusements of mankind. But it is a characteristic of wisdom not to do desperate things.”

12 Jul 2017 – I call upon the timeless words of Henry David Thoreau, a 19th Century student of Ralph Waldo Emerson (1889-1888), to open this article on the critical consequences of the socio-cultural context for human health and well-being. It is, perhaps, coincidental today is Thoreau’s birthday; his 200th year anniversary, a reminder of the enduring power of great thoughts and words.  Guide me, Sir!

I offer only a few lines of Thoreau’s words as an epigram, insufficient to honor the timelessness of his thoughts, but perhaps sufficient to acknowledge his special sensitivities to the human condition of his age and our age. Thoreau’s entire works deserve reading. The unfolding industrial age in which he lived, was the source of problems paralleling the problems of our unfolding socio-technical age.

I can think of no better guide to justify the thoughts and words of this article. In so many ways, we have forgotten the tragic consequences of the psycho-social contexts of life for the human condition; we have become infatuated with “reductionism,” a wondrous gift of technological progress, but a distraction from the realities of human nature.

No one can deny the sheer wonder and glory of our growing knowledge of the CNS, brain, organs, and genetics. Yet, the magnificence of our knowledge must not detract from our understanding the socio-environmental determinants of our life milieu.  Political powers, controlling funding have called for various national initiatives: “Decade of the Brain.” Similar initiatives for increasing awareness of psychosocial topics have too hidden agendas (see documentary: America’s War on Drugs) directed toward arms deals, racial oppression, and disguised foreign relations policies.

Kurt Lewin (1890-1947), one of psychology’s great thinkers, contended behavior is a function of the interaction of organism and environment (B = O x E). It is the interaction of an organism and its milieu which generates behavior, and the problems of disease and disorder. Nothing exists apart from its inner and outer singular milieu. Although physicists may disagree, nothing exists in a vacuum! Life is connections.

We may be excessively concerned and pre-occupied with the physical aspects of our being, even to the extent of dividing solutions into medical specialties, sub-specialties, and sub-sub specialties. We journey across limb, organ, cell, gene, atom, and molecular space; this journey has proven miraculous for many diseases and disorders. However, this journey alone cannot address nor resolve the tolls exacted on human health and well being forged and sustained within the psychosocial contexts of our lives.

There are many empirical and theoretical reasons concluding many diseases, disorders, dysfunctions, deviancies, and distress arise from the psychosocial contexts of our life than from our body alone. Indeed, the experiences forged and sustained in the psychosocial contexts shape and generate many of these tragic “D” words as the body and mind become war zones for survival struggles – lives of “quiet desperation.”

Today, humans seek respite and relief from “desperation” in prescription pills, illegal drugs and substances, and/or both. Pills and substances are often temporary palliatives, unable to treat and heal the broader destructive contexts of human life, located in the “isms,” poverty, violence, war, and oppression.

There can be no doubt pills and substances alter behavior via neurochemistry and anatomical structure. However, seeking solutions to the determinants of problems requires solutions appropriate to the level generating them and their consequences. Tragically, psychosocial contexts, though obvious, are too often ignored. These are big problems!   Too often local, national, and international leaders yield to the preferences to the wealthy, powerful, and positioned. The result is the medicalization of society and human existence; the abuse of power is history’s story!

Many noble minds and hearts sought to awaken humanity to the psychosocial sources of their problems (e.g., Gandhi, Martin Luther King, Jr., Cesar Chavez, Nelson Mandela, President John Fitzgerald Kennedy), but those in power, continue to dominate, “tossing bones of solace” to reaching hands. Today the world is gifted by many new heroic stalwarts, who are advancing peace and social justice (e.g., Mairead McGuire, Michael Knox, Antonio de Rosa, Glenn Paige, and numerous others). The struggle, however, is endless, and requires a person become a social and political activist. As has been suggested by many, today’s situation requires us to merge personal, occupational, and civic lives; there must be a fusion or a gathering of “self.”

In a previous publication, ( See Anthony J. Marsella (September 17, 2012). Transcend Media Service (TMS): www.http://transcend.org/…/the-conditions-for-human-health-and-well-being-reside in the psychosocial contexts of life/  .  I suggested a number of psycho-social contexts determining health and well being.  These and others are now displayed in Figure 1, along with suggestions of the human responses and conditions they breed. 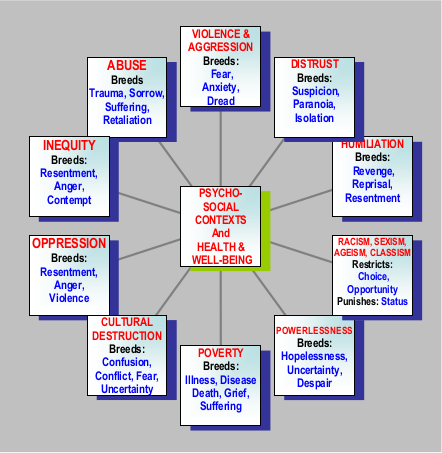 There are so many more items that should be included, as the “interaction” of the contexts foster yet new contexts and complexity.  Amidst this challenging “matrix,” it is easy to become pessimistic, to give up on solutions, and to accept forces and fates as destiny. Do not!

As the struggles appear overwhelming, find inspiration and hope from those about you, especially at local levels, making contributions to peace,  justice, and dignity. They are the new heroes our times.

Anticopyright: Editorials and articles originated on TMS may be freely reprinted, disseminated, translated and used as background material, provided an acknowledgement and link to the source, TMS: The Conditions for Human Health and Well-Being Reside in the Psycho-Social Contexts of Life, is included. Thank you.