Why War? Building on the Legacy of Einstein, Freud and Gandhi

10 Jul 2017 – In 1932, Sigmund Freud and Albert Einstein conducted a correspondence subsequently published under the title ‘Why War?’ See ‘Why War: Einstein and Freud’s Little-Known Correspondence on Violence, Peace, and Human Nature’. In many ways, this dialogue between two giants of the 20th century is symbolic of the effort made by many humans to understand that perplexing and incredibly damaging feature of human experience: the institution of war.

In a recent article, the founder of peace research, Professor Johan Galtung, reminded us of the legacy of Freud and Einstein in this regard and reflected on their dialogue, noting some shortcomings including their failure to ‘unpack conflict’. See ‘Freud-Einstein on Peace’.

Of course, Freud and Einstein weren’t the first to consider the question ‘Why War?’ and their dialogue was preceded by a long sequence of individuals and even some organizations, such as the Women’s International League for Peace and Freedom and War Resisters’ International, who sought to understand, prevent and/or halt particular wars, or even to understand and end the institution itself, as exemplified by the Kellogg-Briand Pact in 1928 outlawing war. Moreover, given the failure of earlier initiatives, many individuals and organizations since Freud and Einstein have set out to understand, prevent and/or halt wars and these efforts have taken divergent forms.

Notable among these, Mohandas K. Gandhi was concerned to develop a mode of action to deal with many manifestations of violence and he dramatically developed, and shared, an understanding of how to apply nonviolence, which he labeled satyagraha (holding firmly to the truth),  in overcoming large-scale violence and exploitation. He successfully applied his strategic understanding of nonviolence to the Indian independence struggle against British colonial rule. But while Gandhi was happy to acknowledge his debt to those who had gone before, he was not shy in proclaiming the importance of finding new ways forward: ‘If we are to make progress, we must not repeat history but make new history. We must add to the inheritance left by our ancestors.’

My own journey to understand human violence was caused by the death of my two uncles, Bob and Tom, in World War II, ten years before I was born. My childhood in the 1950s and 1960s is dotted with memories of my uncles, stimulated through such events as attending memorial services at the Shrine of Remembrance where their war service was outlined. See ‘My Brothers’ on my father’s website. 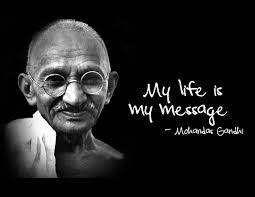 ‘Why are human beings violent?’ I kept asking. Because I thought that this question must have been answered somewhere, I kept reading, including the work of Freud and Karl Marx as an undergraduate, but also the thoughts of many other scholars, such as Frantz Fanon, as well as anarchists, feminists and those writing from other perspectives which offered explanations of violence, whether direct, structural or otherwise.

By the early 1980s I had started to read Gandhi and I had begun to understand nonviolence, as Gandhi practised and explained it, with a depth that seemed to elude the activists I knew and even the scholars in the field that I read.

Separately from this, I was starting to gain a sense that the human mind was not something that could be understood well by viewing it primarily as an organ of thinking and that much of the literature and certainly most of the practitioners in the field of psychology and related fields, especially psychiatry, had failed to understand the emotional depth and complexity of the human mind and the implications of this for dealing with conflict and violence. In this sense, it was clear to me, few had understood, let alone been able to develop, Freud’s legacy. This is because the fundamental problem is about feeling (and, in relation to violence, particularly suppressed fear and anger). Let me explain why.

Violence is something that is usually identified as physical: it involves actions like hitting, punching and using weapons such as a gun. This is one of the types of violence, and probably the one now most often lamented, that is inflicted on indigenous peoples, women and people of colour, among others.

So what are ‘invisible’ and ‘utterly invisible’ violence?

In essence, ‘invisible’ violence is the ‘little things’ we do every day, partly because we are just ‘too busy’. For example, when we do not allow time to listen to, and value, a child’s thoughts and feelings, the child learns to not listen to themSelf thus destroying their internal communication system. When we do not let a child say what they want (or ignore them when they do), the child develops communication and behavioural dysfunctionalities as they keep trying to meet their own needs (which, as a basic survival strategy, they are genetically programmed to do).

The fundamental outcome of being bombarded throughout their childhood by this ‘invisible’ violence is that the child is utterly overwhelmed by feelings of fear, pain, anger and sadness (among many others). However, parents, teachers and other adults also actively interfere with the expression of these feelings and the behavioural responses that are naturally generated by them and it is this ‘utterly invisible’ violence that explains why the dysfunctional behavioural outcomes actually occur.

However, once a child has been terrorized into suppressing their awareness of their feelings (rather than being allowed to have their feelings and to act on them) the child has also unconsciously suppressed their awareness of the reality that caused these feelings. This has many outcomes that are disastrous for the individual, for society and for nature because the individual will now easily suppress their awareness of the feelings that would tell them how to act most functionally in any given circumstance and they will progressively acquire a phenomenal variety of dysfunctional behaviours, including many that are violent towards themselves, others and/or the Earth.

Moreover, this emotional (or psychological) damage will lead to a unique combination of violent behaviours in each case. And some of these individuals will gravitate to working in one of the social roles that specifically requires, or justifies, the use of ‘legitimized violence’, such as the violence carried out by police, prosecuting lawyers, magistrates and judges, as well as that inflicted by the military. Others, of course, will operate outside the realm of legitimized violence and be labelled as ‘criminals’.

But, you might be wondering, what is the link between what happens in childhood and war?

The answer is simply that perpetrators of violence, and those who collaborate with them, are created during childhood. And these perpetrators and collaborators are all terrified, self-hating and powerless – for much greater detail of the precise psychological characteristics of perpetrators of violence and their collaborators, see ‘Why Violence?’ and ‘Fearless Psychology and Fearful Psychology: Principles and Practice’ – and they go on to perform all of the key roles in creating, maintaining, equipping, staffing and legitimizing the institutions of war and in conducting it.

If it weren’t for the violence to which we are all mercilessly subjected throughout childhood, there would be no interest in violence or war of any kind. If we were raised without violence, we would be naturally peaceful and cooperative, content to spend our time seeking to achieve our own unique evolutionary potential and to nurture the journey of others as well as life itself, rather than just become another cog in someone else’s military (or other bureaucratic or corporate) machine.

If any of the above resonates with you, then I invite you to make ‘My Promise to Children’.

In addition, if further reducing the violence in our world appeals to you, then you are also welcome to consider participating in ‘The Flame Tree Project to Save Life on Earth’, signing the online pledge of ‘The People’s Charter to Create a Nonviolent World’ and/or considering using the strategic framework on one or the other of these two websites for your campaign to end violence or war in one context or another: Nonviolent Campaign Strategy and Nonviolent Defense/Liberation Strategy.

A child is not born to make war. But if you inflict enough violence on a child, and destroy their capacity to become their own unique and powerful self, they will be terrorised into perceiving violence and war as their society wants them to be perceived. And violence and war, and the institutions that maintain them, will flourish.

If we want to end war, we must halt the adult war against children as a priority.

Robert Burrowes, Ph.D. is a member of the TRANSCEND Network for Peace, Development and Environment and has a lifetime commitment to understanding and ending human violence. He has done extensive research since 1966 in an effort to understand why human beings are violent and has been a nonviolent activist since 1981. He is the author of Why Violence? Websites: (Charter)  (Flame Tree Project)  (Songs of Nonviolence) (Nonviolent Campaign Strategy) (Nonviolent Defense/Liberation Strategy) (http://robertjburrowes.wordpress.com)  Email: flametree@riseup.net

Anticopyright: Editorials and articles originated on TMS may be freely reprinted, disseminated, translated and used as background material, provided an acknowledgement and link to the source, TMS: Why War? Building on the Legacy of Einstein, Freud and Gandhi, is included. Thank you.