21 Aug 2017 – Most people around the world would like to live as long as they can – they would like to postpone death that signifies the end of one’s life. This is not unusual. Biologically all living beings – human, animal, bird, have this inbuilt nature or feeling.

One can clearly see how a bird or animal that is being slaughtered or shot, tries to escape its end by trying whatever means it may have under the circumstances to escape death. When however these creatures are cornered and no escape route remains, they yell or cry out in a very frightening manner before death overtakes them.

Similarly human beings also would like to postpone if not altogether defeat death. This is so in most people except in the case of the Jain religion where some people choose to die rather than exist in the manner they are living. They choose to die when they are old and ill or sometimes even when they are relatively young, they feel that they have lived enough and would like to end their life. This practice is called Santhra and is allowed by their faith and the Indian law.

There are other occasions or reasons where some people who are under some financial pressure or otherwise depressed due to some other factor that they cannot be relieved of, choose to commit suicide. It is said that Hitler and the Nobel Prize winner novelist Ernst Hemingway committed suicide for reasons that they felt were overpowering.

In this essay I will discuss how modern medicine or surgery are used by people all over the world to cure them of any disease that they are suffering from and prolong life. Common diseases in the modern world are cancer, Parkinson’s disease, kidney failures or Alzheimers to mention a few of the common ailments modern man suffers from. It is not that people in only the rich industrialised nations suffer from these diseases. But the frequency or occurrence of these diseases is significantly larger in industrialised  countries in comparison to poorer nations of Asia and Africa and some Latin American countries.

When people especially those above the ages of 50 or so suffer from the above mentioned and some other diseases such as heart problems or obesity etc. they have recourse to modern medicines and health care that includes hospitalisation, ICUs, surgery and so on. The medical care and the treatment they receive generally help them to recover from the disease and definitely make their lives more comfortable. They may succumb to the disease ultimately but their lives are certainly prolonged.

But it is also known that since most citizens are covered with health insurance in rich countries, hospitals prescribe several medical tests and expensive drugs that are perhaps not necessary. There is occasionally an unholy alliance between the insurance companies and hospitals. In fact, some medication is perhaps unnecessary.

Healthy conditions help in prevention or reduction of disease. The physical environment and potable water are of better quality today than earlier and this helps in prevention of disease and extending peoples’ lives. Statistics inform us that the average age of human beings has gone up all over the world and in some cases by as much as fifteen or twenty years.

Other than the few examples of having a better environment (cleaner air, water and food) mentioned earlier, the importance of prevention of disease does not receive the importance that it deserves in the modern western medical system. In the system of Ayurveda that was practiced in India and its neighbouring countries research work has been continuing on prevention rather than just curing of disease. Ayurveda in that sense is a holistic system that is largely based on the knowledge of the medicinal properties of herbs and plants. There are many books and articles on the subject that reveal the effectiveness of several non-toxic herbs, first in prevention and then in curing   some of the common ailments.

One common example is the yellowish herb haldi (turmeric) that is ordinarily used in cooking Indian dishes. Another is the tree neem whose leaves have properties of prevention of chest or throat congestion that is quite common in many regions. The twigs of the neem tree have been used to clean teeth for centuries all over India. The twigs are free and easily available in the warm climate of India. There are other plants, herbs or the bark of a tree that have medicinal properties. Their advantage is easy availability and relatively low cost but above all they do not have any side effects that modern western medicines have. For example the chemotherapy treatment of patients suffering from cancer results in their losing hair as one of the side effects.

I am not suggesting that western medicine is retrograde because of side effects or for other reasons. I am only suggesting the benefits of the Ayurveda system which helps first in prevention and then in curing without elaborate procedures and side effects. Today many of the herbs and plants that have medicinal values have been chemically analysed and the medicines that have been extracted from them are easily and conveniently available in a bottle form in specialised drugstores.

Obesity is occurring quite frequently in many countries due mainly to two factors. One is over eating and the other is lack of sufficient physical exercise.

This problem is arising in poorer counties also such as India or Pakistan or parts of Africa due to the above factors.  As modern values spread globally, the problem of obesity has also become omnipresent although to a lesser extent than in richer countries. Business people or those working in corporate houses for example do not get the exercise that their body requires. Overeating and eating the so called junk food is another factor. But in India and the similar other countries, one will hardly see any farmer or labourer obese – the reason being that they work hard in their farms as well as in factories, working as ordinary urban labourers or in pulling cycle rickshaws etc. There is mechanisation in agriculture as well as in industrial units but not to the extent as in western countries. The consequence of hard physical work is positive in terms of their health.

Yoga is another form of physical and mental exercise that is becoming popular all over the world. Seeing its benefits the United Nations has declared 21 June as the International day of Yoga and the first such Yoga Day was celebrated in 2015.

It is a good sign that there are multiple means of curing or prevention of diseases  — modern western medical science, Ayurveda, yoga etc. and living a healthier life. But one contrary thought that I often get is what after extending life? Are we living better just because the life is prolonged or are we encountering a newer problem? Just look at the elder people all over the world and this number is increasing and you see isolation, loneliness and helplessness of the aged population. Many who can afford the expenditure are put in old age homes away from their children or friends. The physical condition of most such people is reasonably satisfactory but their mental condition is often pitiable. These people often feel that is better to die than live in such loneliness. I remember once when I went to an old age home in USA, I saw an elderly woman who would be around 80 years of age living in relative comfort in the old age home. Her daughter would visit her once a week and talk to her for a few minutes. I once overheard the daughter telling her mother “Mom, when will you die?”

In India and several poorer countries of the world there are no or few old age homes. The elderly people who are approaching their last phase in life, live with their children and grand children in their own homes. My own mother lived to the ripe age of 95 years but she died peacefully in the company of children, grand and even great grand children.  I am approaching the twilight of my life and I only hope that I am not forced to live and die in an old age home. 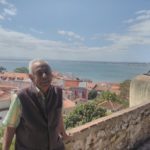 Anticopyright: Editorials and articles originated on TMS may be freely reprinted, disseminated, translated and used as background material, provided an acknowledgement and link to the source, TMS: Extending Life –- Living and Dying in Peace, is included. Thank you.