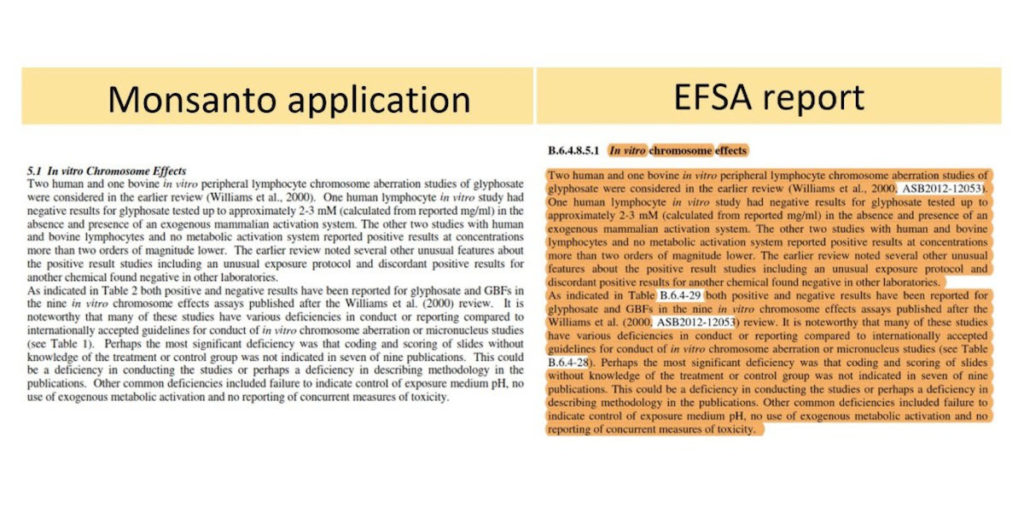 15 Sep 2017 – Two years ago, the debate over glyphosate‘s link to cancer took a surprising turn when the European Food Safety Authority’s (EFSA) infamously rejected the World Health Organization’s International Agency for Research on Cancer’s March 2015 classification of the weedkiller as a possible carcinogen.

However, new reporting from the Guardian reveals that the European agency’s recommendation that the chemical is safe for public use was based on an EU report that directly lifted large sections of text from a study conducted by Monsanto, the manufacturer of glyphosate-based Roundup.

The particular sections cover some of the biggest questions about glyphosate’s supposed health risks, including its links to genotoxicity, carcinogenicity and reproductive toxicity.

The revelation comes as the European Union debates whether it should extend its licensing of the world’s most popular herbicide. As it happens, the EFSA provides scientific advice to the EU and plays a key role in the authorization of thousands of products that end up in Europe’s food chain, including genetically modified organisms, pesticides, food additives and nanotech products, according to Corporate Europe Observatory, a non-profit watchdog group.

The Guardian reports that dozens of pages from of the 4,300-page renewal assessment report (RAR) published in 2015 “are identical to passages in an application submitted by Monsanto on behalf of the Glyphosate Task Force (GTF), an industry body led by the company.”

Additionally, the paper includes a review copied from ex-Monsanto employee John Acquavella and company toxicologist Donna Farmer that “challenges the results of a study which found an association between pesticide use and non-Hodgkin lymphoma,” the Guardian report states.

EFSA has issued a statement saying, “Every scientific study is scrutinized for relevance and reliability by EU risk assessors based on the evidence contained within the study.”

A Monsanto spokesperson told the Guardian, “There was an explanation by EFSA that direct passages from the industry application were included. This should by no means be understood as EFSA’s conclusion on glyphosate.”

But Franziska Achterberg, Greenpeace EU food policy director, issued stern words against the agency in light of the new finding.

“Whether this is a question of negligence or intent, it is completely unacceptable for government bodies to pass off industry analysis as their own,” Achterberg said. “It calls into question the entire EU pesticide approval process. If regulators rely on the industry’s evaluation of the science without doing their own assessment, the decision whether pesticides are deemed safe or not is effectively in the industry’s hands. Voting against glyphosate is the last opportunity our governments have to fulfill their duty to protect us from this dangerous chemical.”