The Horrifying Tragedy of Holocaust

30 Aug 2017 – The Holocaust is undoubtedly one of the worst crimes and tragedies of the WWII. The word Holocaust comes from the Greek word holo “whole” + kaustos “burnt.” It refers to an animal sacrifice in which the entire animal is burned.

It is generally agreed by historians and scholars that the Holocaust began in January 1933 when Hitler came to power in the Third Reich and technically ended on May 8, 1945 (end of WWII). Before that Soviet soldiers liberated some of the death camps and reported the horrifying evidences of brutalities and murder committed by the Nazis under Hitler’s orders.

During this period (1933 – 1945), more than 11 million men, women, and children were murdered in the Holocaust.  Of these, more than half the people killed (approximately 6 million) were Jews. There were other societal groups like homosexuals, gypsies, communists, mentally ill people etc. who lost their lives. But the word “Holocaust” refers solely to the Jews. The total number of casualties in WW II is estimated to be about 60 million people. 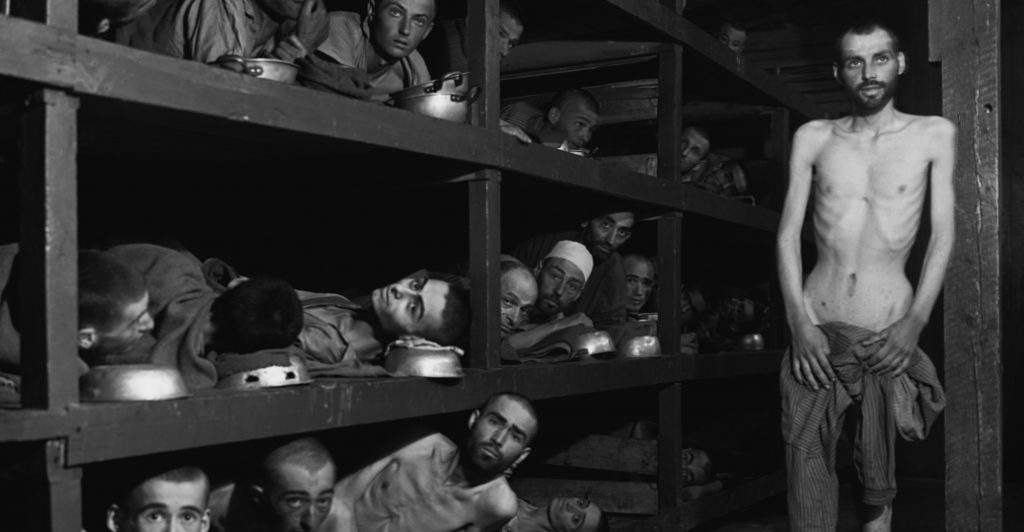 Survivors at Buchenwald Concentration Camp remain in their barracks after liberation by Allies on April 16, 1945. Elie Wiesel, the Nobel Prize winning author of Night, is on the second bunk from the bottom, seventh from the left.

The worst victims were innocent children below the ages of 14 or 15 and it is estimated that more than a million Jewish children were brutally killed during the Holocaust. Why were these innocent and helpless children targeted? A particularly vicious logic to kill them was that when they grew up, they would produce more Jews and so it was better to nip them in the bud. What logic could be more shocking, profane and vile?

What means were used to brutalize and kill adult Jews and children? Several ghastly methods apart from legal laws framed during the period, were employed.

One method used for murdering the Jews was the gas chambers into which the people were asked to enter without telling them the real purpose; they were asked to undress and take a bath. Upon entering these chambers, a poisonous gas was introduced where all the people including children met their end. Some of the children carried their toys and were playing with each other before meeting their ghastly end. A few million Jews are estimated to have been gassed to death in this manner. Auschwitz which was originally built to imprison Polish political prisoners, became subsequently a brutal and horrifying gas chamber where thousands of prisoners could be eliminated in a day. A “Final Solution” was planned during a Conference in January 1942 where some high-ranking Nazis met in a suburb of Berlin, and presented a program to deport all Jews to Poland where they would be killed.

The gases used were usually carbon monoxide CO and later Zyklon B that was more effective in killing the inmates of the gas chambers. Apart from these death chambers, Hitler had also established concentration camps through a legislative action that permitted him to do whatever he wanted without any serious opposition. Political opponents were often imprisoned in these camps.

Another method employed in Kiev in Ukraine was to take the Jews to a ravine’s edge and to shoot them. A few who escaped, including some children were physically pushed below the abyss. The German soldiers then pushed the abyss wall over the persons and thereby buried them dead or alive. About thirty thousand Jews and their children were eliminated in this manner in two days.

The people were gassed and otherwise killed not only in Kiev but in other parts of Ukraine and also in Lithuania, Latvia, Estonia, Belarus and Russia.

Forcing the Jewish people into ghettos and denying them food, water and other necessities for survival was another vile means employed by the Nazis to eliminate these unfortunate people. Another method used in the initial stages of the Holocaust was to enter the homes, schools, synagogues of Jews, loot them and use violence against anyone who protested. 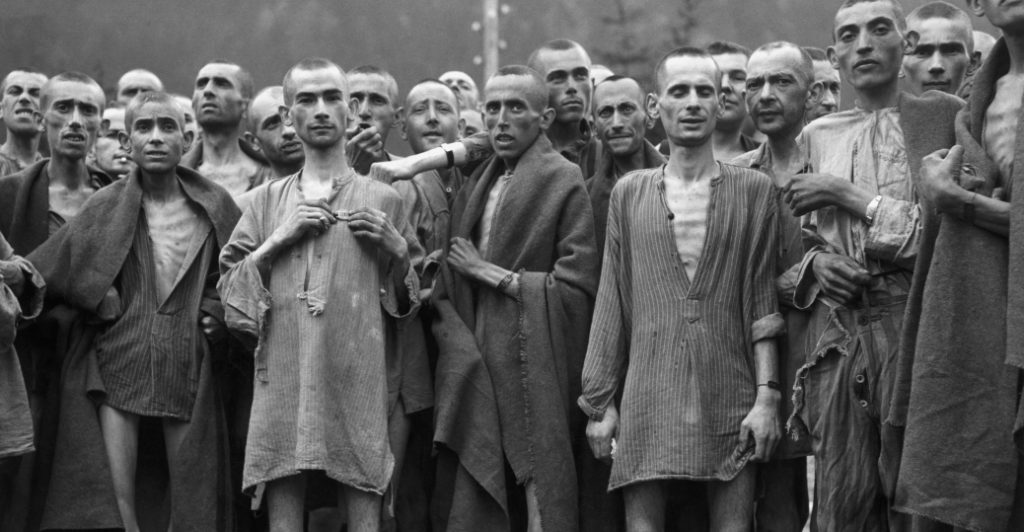 Emaciated survivors of one of the largest Nazi concentration camps, at Ebensee, Austria, entered by the 80th division, U.S. Third army on May 7, 1945.

The Jewish people were transported for labour and death camps from one region to another in cattle wagons that lacked food, water, ventilation. When the doors of these wagons were opened, many of the people were already dead. There were some more ways of killing the people: starvation in combination with heavy labour; performing medical experiments on the beleaguered people etc.

It is not that only Hitler or his officers perpetrated these crimes. Some ordinary men and women who supported the Reich, also willingly participated in these vicious killings and other brutalities.

Such was the animosity and hatred of Hitler against Jews, that they were killed and eliminated in not only Germany but in several other European countries including Austria, Poland, Ukraine, Belarus, Russia etc. Others who were opposed to Hitler — homosexuals, Jehovah’s witnesses as well as gypsies were killed by gassing or shooting them or by other horrific methods. In all, of the eleven million who were estimated to have been killed about 6 million were Jews.

As indicated earlier Hitler employed legal methods to justify the brutal methods his government was using to eliminate Jews. He invoked the Nuremberg Law that deprived Jews of German citizenship. In addition, German citizens who were Christian, were forbidden from marrying Jews so as to prevent Jews from claiming to be Christians.

In contrast to the beastly action of murder of Jews and their children, a few well meaning and kind Christian and other families, hid some Jewish adults and children in their homes facing the risk of severe punishment if they were caught by the Nazi police. Some of these children were too young to understand that their real parents were dead and believed the Christian parents to be their real parents.

Despite all the evidence of the brutalities, atrocities committed and the killings of about 6 million Jews in concentration camps and gas chambers, there are some Neo-Nazis who deny that holocaust took place during Hitler’s regime. In fact, they call this ghastly event as HOLOHOAX. One of the prominent persons who denied the occurrence of Holocaust was Ernest Zündel who lived in Toronto in Canada and continued to write texts such as “Did six million really die?” and another essay “The Hitler we Loved and Why”. He was supported by other Neo-Nazis. Ernest Zündel died in August this year.

Earlier in 2011, the Iran President Mahmoud Ahmadinejad also had stated that Holocaust had never happened. In order to reject this claim, many Christians and Muslims joined the Jews in the former concentration camp at Auschwitz in support of the massacred Jews during the Holocaust.

On the other hand, the German Chancellor Konrad Adenauer (1876 – 1967) acknowledged the guilt of his country for the Holocaust and asked for forgiveness for the crimes committed against the Jews. His government also decided to pay suitable pensions to the survivors who had suffered immensely.

The International Holocaust Remembrance Day is now commemorated on 27 January to pledge that the atrocities committed by Adolf Hitler and the Third Reich do not occur again.

The World War technically ended on May 8 1945 in Europe although the Americans bombed Hiroshima and Nagasaki in Japan in August of that year.

Sensing utter defeat and humiliation Hitler had already committed suicide on 30 April in a bunker in Berlin by swallowing cyanide and shooting himself on his head by his pistol.

Holocaust is one of the most tragic and horrifying parts of the history of WWII. The other is the nuclear bombing of the two Japanese cities. Can humanity hope that such horrors will not recur in future? Peace lovers and spiritual people all over the world are working for such a world – that is free from nuclear bombs and have people living in tranquility and peace. Let us all work towards such a harmonious and peaceful scenario.

Anticopyright: Editorials and articles originated on TMS may be freely reprinted, disseminated, translated and used as background material, provided an acknowledgement and link to the source, TMS: The Horrifying Tragedy of Holocaust, is included. Thank you.

One Response to “The Horrifying Tragedy of Holocaust”