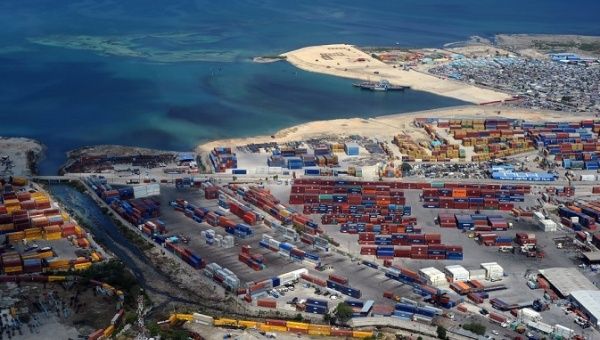 The Seaport Terminal and Wharf Jeremie in Port-au-Prince. | Photo: AFP

1 Sep 2017 – The People’s Republic of China is preparing to carry through with plans to invest a massive US$30 billion in developing Haiti’s infrastructure, including power plants, sanitation works, water systems, railways, affordable housing, and marketplaces, in an agreement that is expected to have a major social, economic, and developmental impact.

OPINION: India and China Rivals or Potential Partners in Liberation?

This week, workers have started to be contacted for the approximately 20,000 jobs needed to carry out the ambitious initiative, Haitian press has reported.

Commitment to the program was first announced by the Haitian Press Agency in the beginning of August, following an eight-day visit of a Chinese delegation to Haiti. The initial idea was concieved at the Belt and Road initiative summit in Beijing, where infrastructure projects were proposed to over 100 countries around the world.

Last week, the Municipality of Port-au-Prince formally accepted the project’s initial phase, which will begin with an investment of US4.711 billion targeting the country’s capital, where Chinese investment will partner with Haitian companies to develop clean water and drainage systems, road infrastructure, sanitation projects, communications infrastructure, and a restoration of Port-au-Prince’s old city.

A video released by the Haitian company Bati Ayiti, explaining the project to renovate Port-au-Prince with the initial Chinese investment of nearly US$5 billion.

“This accord may finally break the grip that the eternal exploiters of Haiti had for decades on the poor people of Haiti while they greatly benefited from favors and monopolies from corrupt governments,” said Bernard Sansaricq, the former Senate President of Haiti, to Huffington Post

The city will look to tackle urban pollution and sanitation by installing 450 public toilets, and implementing a public garbage collection system and waste landfills.

In a city that has frequent blackouts, the project will install a 2000 megawatt gas-fired power station.

Communications systems will receive an upgrade, with the aim of providing reliable cell service across the municipality, and a central internet center which is able to run emergency dispatch.

While the initial investment of nearly US$5 billion is only tackling the Port-au-Prince region, it is expected that over the course of the rest of the nearly US$30 billion promised the rest of Haiti will be covered as well.