One of the longest-running U.N. peacekeeping missions has been implicated in a child sex ring and a cholera outbreak in Haiti. 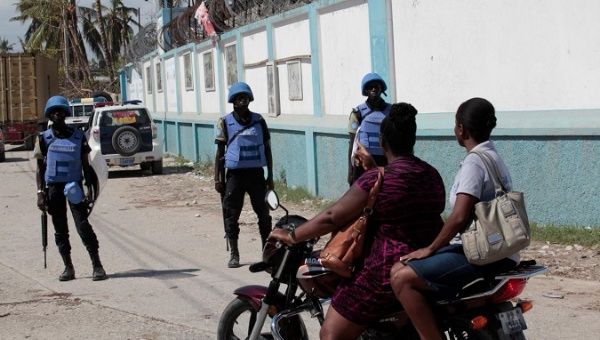 Peacekeepers stand in front of vehicles as they secure the perimeter of the MINUSTAH base in October 2016. | Photo: Reuters

6 Oct 2017 – The United Nations military force of 2,370 soldiers formally ended its operations in Haiti Thursday [5 Oct] during a ceremony attended by President Jovenel Moise in Tabarre, northwest of the capital.

Known as MINUSTAH, the remaining blue helmets are now expected to leave before Oct. 15.

Nevertheless, the troops will be immediately replaced by about 1,300 international civilian police officers, as well as 350 civilians for a new mission called the United Nations Mission for Justice Support in Haiti.

Led by a Brazilian troop attaché, MINUSTAH has occupied Haiti for over 13 years. Their presence in the Caribbean island nation, officially deemed a peacekeeping mission, was directly linked to a cholera outbreak that killed thousands of Haitians nearly six years ago.

MINUSTAH is also implicated in a child sex ring. One of the abused girls, identified only as V01 (Victim Number One), told U.N. investigators, “I didn’t even have breasts” when she was sought for sex by U.N. soldiers. She added that from 12-15 years old, she was forced to have sex with nearly 50 peacekeeping soldiers, including one who gave her 75 cents.

In August, the U.N. finally admitted its peacekeepers played a role in the spread of cholera in Haiti after years of denying responsibility. Before 2010, no cases of cholera had been detected in the country for around a century, but an expert panel in 2011 confirmed the outbreak had originated in a U.N. camp in the upper Artibonite River valley.

The U.N. reports there have likely been around 10,000 cholera-related deaths since the outbreak in 2010, though Doctors Without Borders have argued the actual death toll is likely to be higher. Hundreds of thousands have also suffered from the disease, which is now endemic in the country.