Is Lebanon’s Economy Heading for Free-Fall?

26 Oct 2017 – The growing list of US sanctions targeting Iran’s Hezbollah in Lebanon and Iran’s Revolutionary Guard Corps (IRGC) is only part of a broader American, Israeli and Western strategy of roll-back of Iran’s activities in the Northern Middle East than one seeking direct military confrontation. Although the latter may be one of the unintended consequences as Iran begins to retaliate.

This week the U.S. Congress is working on two additional legislative initiatives to tighten sanctions against Lebanon’s Hezbollah. The new sanctions include more cash bounties on Hezbollah leaders, as well as on Iran’s Revolutionary Guard Corps (IRGC).  The main concern in Congress is Iran’s economic break-out and the Islamic Republics continuing hegemonic success in the region. Recently an Iranian official close to Supreme Leader Ayatollah Khamenei famously and accurately remarked, “Three Arab capitals [Beirut, Damascus, and Baghdad] have already fallen into Iran’s hands and belong to our Iranian Islamic Revolution.” The US Congress which regularly dreams up new sanctions apparently believes that the more money Iran and Hezbollah have, the more they will advance Iran’s military and political success in the region, including claims on Capitol Hill of Hezbollah’s escalating domination of Lebanon.

The latest sanctions are not likely to produce compromise or agreement but they will make it more difficult for Lebanon to apply breaks to its downward economic and political spiral. Economic pressure on many in Lebanon who support Hezbollah will increase. Naturally Lebanese sectarian party bosses worry about the sanctions effect on Lebanon’s economy. This is partly because Hezbollah and its allies are deeply involved in Lebanon’s banking system and the financial community is aware that Lebanon’s economy cannot take much more pressure. 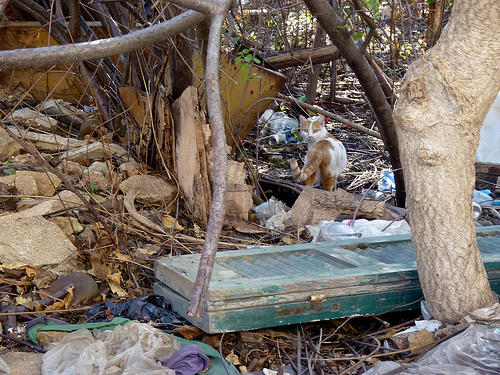 One of many problems that plague Lebanon’s citizens is the inability of its government to provide basic services including water, electricity, and collect garbage. Photo: Maher Jalhoum. March 2017 Beirut.

US sanctions targeting certain Lebanese “terrorists” are having an effect also on Syria’s economy next door. The Central Bank recently issued a SYP 2,000 note (worth about $ 4) after US sanctions caused the Syrian Pound lo lose approximately 95% of its market value since 2011. The threats of US sanctions are also leading a number of Lebanese banks to reduce their operations with Syrian banks but so far they have not sold their shares.

“taken a clear decision to immunize the country from US sanctions and not to create a climate of escalation that would affect political stability. “There is no doubt that we should not underestimate the extent of the U.S. led sanctions pressure, but we are taking all the precautions to face this situation.”

A Parliamentary source explained. How precisely Lebanon’s Parliament will do this was not explained but a four-point plan was agreed upon. First and foremost it calls for the current political leaders staying in power. Secondly “Preserving the (Michael Aoun Hezbollah chosen government), thirdly “maintaining the current political alignment”, and lastly, alleviating the U.S. sanctions impact on the economy, by protecting Lebanon’s security and stability.”

But the ability of the Lebanese economy and banking sector to sidestep the ramifications of the sanctions will very likely continue to fail.

If Lebanon’s sectarian parties allow next year’s elections, the first in nearly a decade, it would be a step in the right direction.  But past being prologue, if some Lebanese sects do not like the results of pre-election polling they will block the elections for another indeterminate period.  Similarly, if progress is made towards developing a Lebanese hydrocarbon industry it could boost Lebanon’s economic growth. A problem with this scenario is that certain Lebanese politicians are seeking to own a major chunk of any hydrocarbon industry likely to be established. Consequently, the ability of the Lebanese economy and banking sector to sidestep the ramifications of the sanctions will likely continue failing.

The absence of Lebanese public and international confidence in Lebanon’s economy is also a major problem with respect to salvaging it. Lebanon’s parliament on 10/17/2017 finally discussed the country’s first state budget in 12 years. However, as MP Antoine Zahra pointed out:

“Today we are discussing a budget for funds that have already been spent. We will authorize for the government what it has already authorized for itself.”

“The magnitude of spending on public sector wages has become scary and it is consuming one-third of the state treasury.”

MP Khaled al-Daher of Akkar meanwhile pointed out that,

“had corruption been curbed, this budget would have been able to be LBP 5,000 billion lower.”

The day before, Lebanon’s political bosses some of whom were criminal warlords during Lebanon’s civil war (1975-1991) and who in 1991 voted themselves total amnesty for their war crimes (in the final draft of the Amnesty Decree they crossed out “war crimes” and inserted “political crimes” and anointed themselves political lords for life) cut yet more deals to keep themselves in power. According to a 10/16/2017 report by Lebanon’s National News Agency (NNA),

“Lawmakers re-elected in only a ten-minute session, all parliamentary committees, their presidents, and members of the rapporteurs.”

Sami Atallah, an economist and director of the Lebanese Center for Policy Studies in Beirut recently commented that,

“Lebanon appears to be headed toward economic bankruptcy. Its chronic fiscal deficit, compounded with a trade deficit, is exposing the country’s financing needs.”

“Lebanon’s political elite is willing to actually reform the system that is serving its interests through excessive spending and debt financing. Politicians will buy time through other gimmicks and will try to monetize the Syrian refugee crisis through another international conference to collect funds, lest any economic collapse have geopolitical consequences for Europe.  The country’s policymakers are morally and intellectually bankrupt when it comes to developing an economic system that delivers equitable growth for its citizens.”

The above promised Lebanese political steps are largely irrelevant according to World Bank and International Monetary Fund and a majority of experts who have been studying Lebanon’s economy. Some of their findings about the future of Lebanon’s economy include the following:

According to Professor Sami Nader, Director of the Levant Institute for Strategic Affairs,

“Lebanon’s financial situation today is not so very different from that of Greece in 2009. It faces an increasing budget deficit, equivalent to 11 percent of GDP, which is leading to an alarming level of public debt, coupled with a high level of corruption and the absence of growth. For the sixth year in a row, since the outbreak of the uprisings in Syria, Lebanon’s debt is growing five times faster than its economy—the economy is growing at an average growth rate of 1.2 percent.”

Zafiris Tzannatos,| former Professor  and Chair of the Economics Department at the American University of Beirut, told Carnegie earlier this month that Lebanon’s economy is in crisis. Real GDP growth is projected to remain anemic at around 1.2 percent per year (representing half of Lebanon’s average in the post-civil war period until 2014) against a very tenuous fiscal position. This includes a high debt-to-GDP ratio, estimated at 150 percent by the World Bank and projected to increase, as well as a fiscal deficit of 10 percent. At the same time foreign remittances from Lebanese abroad have been declining while merchandize imports have been rising, as has the already sizable current account deficit that stands presently at 20 percent.

These three indicators (the debt and the dual fiscal and current account deficits) are not only sizeable as such, they are also among the largest in the world. This makes the size of Lebanon’s economic problem formidable, as evidenced by structural adjustment programs internationally, even if one bypasses the risks arising from the highly dollarized pegged economy and the lack of dynamism in a business environment dominated by corruption.

Lebanon’s economy is also widely predicted to deteriorate further and fast with a reversal in oil prices, increases in international interest rates, and an appreciation of the euro, which have so far been favorable to the Lebanese economy.

So how can granting Palestinian refugees in Lebanon the right to work help salvage Lebanon’s weakening economy?

Anticopyright: Editorials and articles originated on TMS may be freely reprinted, disseminated, translated and used as background material, provided an acknowledgement and link to the source, TMS: Lebanon’s Economy Is in Crisis – Granting Palestinians the Right to Work Will Help Fix It (Part 1), is included. Thank you.