The U.S. Voted Against a U.N. Resolution Condemning Death Penalty for LGBTQ People 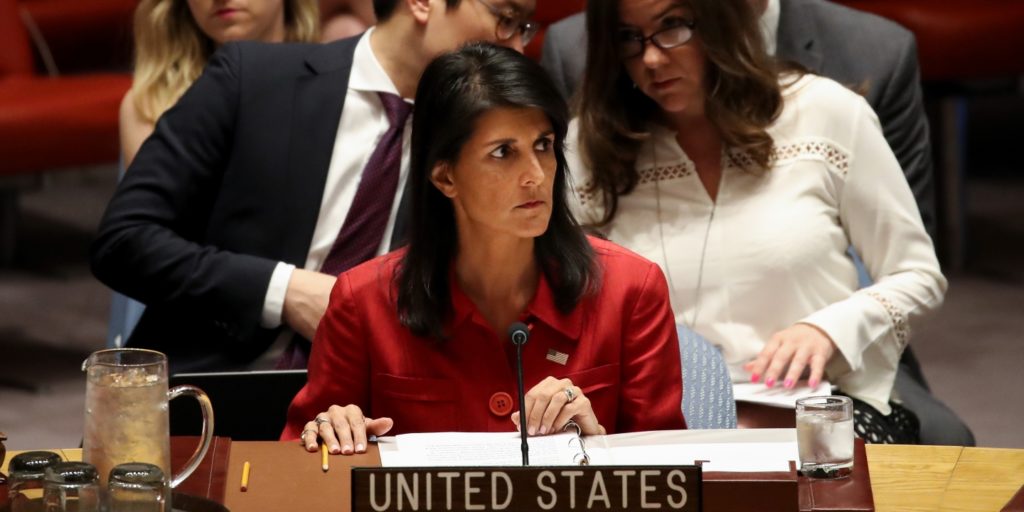 Nikki Haley, United States ambassador to the United Nations, looks on during an emergency meeting of the U.N. Security Council at United Nations headquarters, July 5, 2017 in New York City.

The U.N. Human Rights Council approved the measure on Friday with a 27-13 vote, with seven countries abstaining. The United States, led by Amb. Nikki Haley, voted for an amendment to the resolution that said the death penalty was not necessarily a human rights violation, and voted against amendments urging countries to stop using experimental drugs in executions.

Shame on US! I was proud to lead U.S. efforts at UN to protect LGBTQ people, back in the day when America stood for human rights for all 🇺🇸 https://t.co/3Y403bP7Wh

The Trump administration’s vote is nothing new — presidents from both parties have long objected to U.N. resolutions critical of capital punishment. In December 2016, for example — in the final weeks of Obama’s presidency — the U.S. voted against a resolution urging states not to execute minors, pregnant women, and the intellectually disabled.

While last week’s vote is not evidence of any significant policy change, it does show what kind of company the U.S. keeps among nations that support the death penalty. Twelve other countries joined the United States in voting against the resolution, including Egypt, which executes political dissidents, Ethiopia, which is considering the death penalty for same-sex activity, and Saudi Arabia, which, in 2015, beheaded more people than ISIS.

A 2014 report by Amnesty International found that even though the death penalty in on the books in one-third of the world’s countries, only nine countries have regularly used it in past years – including Iran, Sudan, China and North Korea. In other words, when the United States defends the death penalty, it defends the practice of some of the world’s worst human rights violators.

The U.S. Mission to the U.N. did not return a request for comment from The Intercept.