In recent years, the call for political systems based on power-sharing and liberal democracy of executive power has been in full swing in countries where shortage of change and coalition of power has resulted in large scale poor governance and chronic citizens’ frustration. Cameroon, with a unique exoglossic and colonial heritage is one of such countries. Against the background of half a century French-English constitutional Bilingualism with a vibrant heterogynous linguistic landscape, it provides an ideal setting for political debate nationwide in general and in its dual cultural heritage in particular. 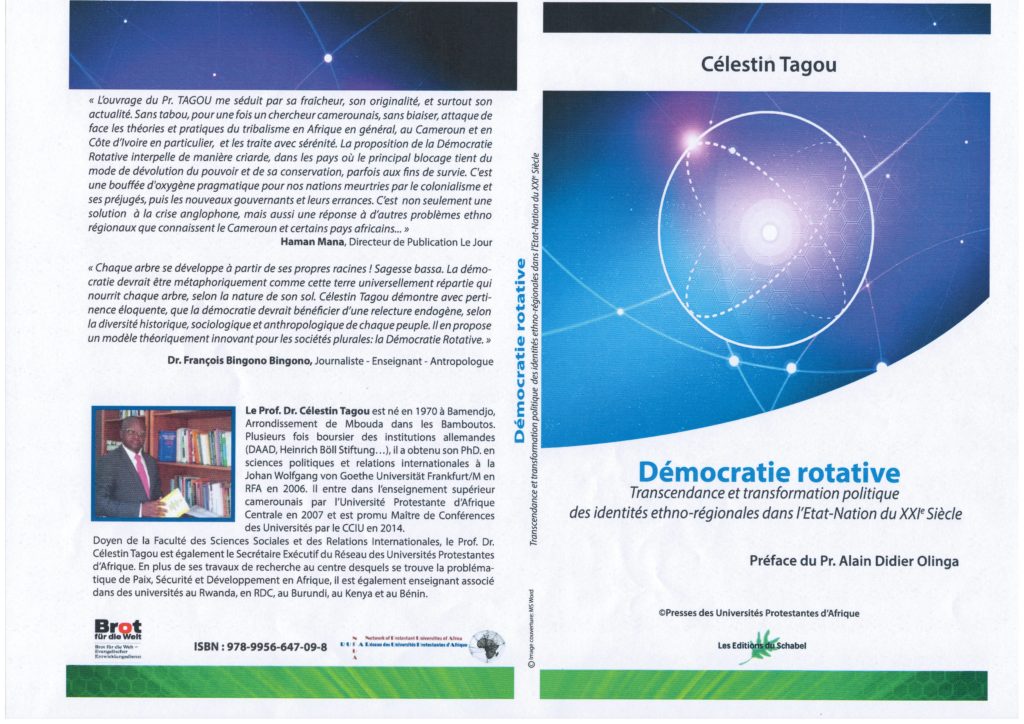 Prof. Celestin Tagou in his 2017 book entitled Democratic Rotation in Office: Political Transcendency and Transformation of Ethno-regional Identities within the 21st Century Nation State, in 167 pages covering 4 chapters explores the concept of power sharing as shaped by the anthropological and socio-cultural realities of the African continent. Beginning with the theoretical concepts of the family, the clan, the tribe, the ethnicity, the people, the race and the state and the nation, (Chapter 1). Prof. Tagou provides a sharp critical analysis of  the “copy and paste” western approach to liberal democracy and its devastating shortcomings within the African context (Chapter 2) before elaborating the main purpose of his book which is “Democratic Rotation in Office” nicely captured in French as “Démocratie Rotative”(Chapter 3) with two significant case studies from Central and West Africa namely Cameroon and Ivory Coast.(Chapter 4).

In a nutshell, Prof. Tagou argues that power sharing and political participation require positive peace which is a necessary condition for sustainable development and this can only be effective through a model of democracy which is in fine tune with African history, its customs as well as its ancestral knowledge. He reckons that the importation, the implementation and even more so the “Copy and paste” of Westminster and Jacobin constitutional democracy in African young states have been “a political and societal mistakes”. Democracy per se could have universal principles and values, but there is not a model of democracy, that is universal. The is a French, a German, a British, an American…. model which is adapted to the various history and cultural background of each country.

Above all, Prof. Tagou brings to the democratic debate table bold, interesting and eye-opening proposals: Africa should proudly and positively mold its own model of democracy rooted in its socio-cultural and ethnic pluralistic context. He proposes a model based on Johan Galtung’s concepts of transcendence and transformation of conflicts: Rotative Democracy as mechanism for the election of the President of the Republic.

This book has inter alia two major strengths: first the originality of the argument within the African context marred with chronic heated political tensions around the executive power second, the timing and relevance of the publication with regard to Cameroon, currently in a deadlock political crisis known as “Anglophone Problem”. Prof. Tagou details his proposals with real, reliable and clear facts.

Never the less, although beautifully written in a fascinating and movingly style; Prof. Tagou’s “Democratic Rotation of Office” may leave its reader with a bitter taste in the mouth: how sound and fare can the relationship between the strategic group and the conflicting ones be? Is the rotating period among the 7+1 groups not too long for frustrating citizens to wait? And, as clearly stated by Prof. Alain Didier Olinga in the preface: To which group do the mixed-raced, half-breed and half-cast Cameroonians belong?

Whatever the case, Prof. Tagou has taken an insightful stand into the political debate on power sharing and liberal democracy in Africa with a major step in the contribution towards the search for solutions to office rotation and power coalition in Cameroon and readers and specialists of political sciences within the African continent and beyond will find this book of special interest.

David Tiomajou is a Cross-culture and Sociolinguistics Specialist.

Dr. Célestin Tagou is a member of the TRANSCEND Network, prof. of PS, IR P&D Studies, Dean of the Faculty of Social Sciences and International Relations  at Protestant University of Central Africa, Executive Secretariat of the Network of Protestant Universities of Africa. Yaounde, Cameroon.

Anticopyright: Editorials and articles originated on TMS may be freely reprinted, disseminated, translated and used as background material, provided an acknowledgement and link to the source, TMS: Democratic Rotation in Office: Political Transcendence and Transformation of Ethno-regional Identities within the 21st Century Nation State, is included. Thank you.

2 Responses to “Democratic Rotation in Office: Political Transcendence and Transformation of Ethno-regional Identities within the 21st Century Nation State”