LibLibya, which formerly had the highest standard of living on the African continent, is now in ruins and housing a major slave market—thanks to US invasion, destruction of its social fabric and institutions under Secretary of State Hillary Clinton. 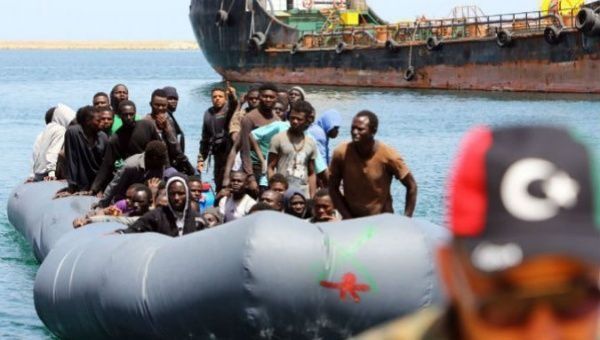 As migrants fleeing war and terror or simply looking for greater economic opportunities, flow through the Libyan border to Europe, the Libyan coastguard has begun to clamp down on the migration crisis.

This has left many migrants and their smugglers in a precarious situation. Many migrants, who are now left destitute after having sold everything to be smuggled through Libya, are being forced into slavery.

Migrants are being sold into slavery, for as low as US$400, to perform excruciating labor. Reminiscent of the auctions during the transatlantic slave trade period, migrants are priced based on their physical capabilities. Many are left broken, mentally and physically, as a result of their forced servitude, the report states.

Earlier this year, survivors of Libya’s slave trade testified to the United Nations on their horrific experiences. The International Organization for Migration, IOM, corroborated these claims by establishing that Libya’s slave trade, as The Guardian wrote, “has become so normalized that people are being traded in public.”

“The situation is dire,” Mohammed Abdiker, the director of operation and emergencies for the International Organization for Migration, said in a statement after returning from Tripoli in April. “Some reports are truly horrifying and the latest reports of ‘slave markets’ for migrants can be added to a long list of outrages.”

Victims reported that they were sold into slavery to pay off debts to their smugglers or to those from whom they borrowed while trying to stay afloat in the African country, after their funds ran out. Most migrants are no longer reaching their final destination, many are dying at sea, and as a result, many are opting to repatriate to their home countries empty-handed.

Libya’s descent into chaos began after the ousting of Colonel Muammar Gaddafi, who ruled the African country for 42 years. On the basis of humanitarian intervention, the United States, European Union and NATO launched an invasion of the country to overthrow the government.

Under the leadership of Colonel Gaddafi, Libya was the most developed country on the African continent. Basic services were socialized, such as healthcare and housing, and Libya had the highest standard of living in all of Africa.

Since 2014, some 600,000 asylum seekers have traversed the Mediterranean from North Africa to Italy. Another 12,000 have perished during the journey.