The Quality of Mercy

21 Nov 2017 – During the spring of 1999, as part of Voices in the Wilderness’s campaign to end indiscriminately lethal U.S./U.N. economic sanctions against Iraq, the Fellowship of Reconciliation arranged for two Nobel Peace laureates, Adolfo Perez Esquivel and Mairead Maguire, to visit the country. Before their travel, Voices activists helped organize meetings for them with a range of ordinary Iraqis affected by an economic warfare targeting the most vulnerable: the elderly, the sick, and most tragically of all, the children. Perez Esquivel studied the itinerary. His voice and face showed clear disappointment. “Yes,” he said, shaking his head, “but when do we meet with the teenagers?” He advised to always learn from a region’s young people, and seek clear, inquisitive views not yet hardened by propaganda. We quickly arranged for Maguire and Perez Esquivel to meet with young women at Baghdad’s Dijla Secondary School for Girls.

It was the spring of 1999. After eight years of deadly economic sanctions, the 2003 U.S. invasion was still the haziest of looming future threats.  I was there with them at the school, and I remember Layla standing up and raising her voice. “You come and you say, you will do, you will do. But nothing changes. Me, I am sixteen. Can you tell me, what is the difference between me, I am sixteen, and someone who is sixteen in your country? I’ll tell you. Our emotions are frozen. We cannot feel.” But then she sat down and cried. 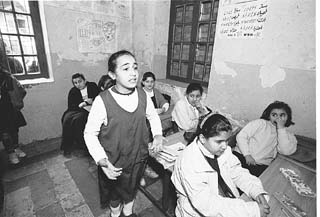 Other Iraqi students wondered what their country had done to deserve this treatment. What would happen to them if the UN said Iraq’s foreign policy directly contributed to the deaths of hundreds of thousands of children, in another country, under age five?  “Who are the criminals?” they asked.

In 1999, young Layla’s voice was both pleading and accusing when she said, “Nothing changes.” A change did occur in 2003. The 13-year economic war turned into a fierce bombing and invasion called “Shock and Awe.” U.S.-led foreign troops battered the nation. With its cities and reservoirs wrecked, its power lines downed, and its police and economy abolished, chaos broke out. Occupying troops watched the country convulse into escalating violence, replicable anywhere. The long smother of the sanctions was lifted from the crushed windpipe of a nation struggling even harder to breathe, its desperate flailing summoning ever more violent responses. The young people’s question, then, should persist: “Who are the criminals?”

As they do each month, my young friends in Kabul, Afghanistan, hosted a three-hour international internet call on November 21st, 2017, focused on ways to survive the psychological traumas inflicted on people living in a war zone. They spoke about how war causes mistrust, fear and a constant anxiety because there is no safe space. They said what they most need are relationships. Trauma destroys connections, makes people feel alone and isolated. Healing involves connection.

Through self-education, they’ve learned to connect and care deeply about people in Yemen where seven million people, according to CBS’s Sixty Minutes, face famine. Meanwhile, a Saudi-led coalition, backed and joined by the U.S., continues blockading and bombing civilians. Despite their own destitution, the Afghan Peace Volunteers collected what they could for relief efforts in Yemen, raising about $48.00.

“The quality of mercy is strained in the Middle East,” reads a New York Times editorial from mid-November, 2017, turning to literature to point out the unspeakably brutal throttling of Yemen where, according to the NYT op-ed,  “Saudi Arabia closed off the highways, sea routes and airports in war-torn Yemen, forbidding humanitarian groups from even shipping chlorine tablets for the Yemenis suffering from a cholera epidemic…The International Red Cross expects about a million people to be infected by cholera in Yemen by December.” The editorial clearly links the epidemic to U.S. policy and emphasizes the Saudi-led campaign’s dependence on military assistance from the U.S.

Mark Weisbrot, an analyst with the Center for Economic and Policy Research, urges ordinary U.S. people to speak up about Yemen, “because this is the world’s best chance of ending what UN aid chief Mark Lowcock called “the largest famine the world has seen for many decades with millions of victims.” Last week, 120,000 people watched a brief video of Code Pink’s Medea Benjamin risking arrest to protest U.S. participation in Saudi war crimes. Now, as local groups in the U.S. and other countries plan vigils, legislative action, civil disobedience and education campaigns, we have a chance to end the nightmare fears of Yemenis facing starvation, disease, and war.

As I watched in 1999, Layla stood before her class to ask two renowned peacemakers what difference there was between her and a sixteen-year-old living in a more secure part of the world. The answer, in terms of her basic human rights and her irreplaceable human value, should be manifestly clear: there is no difference whatsoever. And yet, while U.S. warlords and military contractors collude with their counterparts in other lands, they earn former president Dwight Eisenhower’s blistering evaluation. This world in arms “is spending the sweat of its laborers, the genius of its scientists and the hopes of its children.” Among the most vulnerable children sacrificed are those forced into poverty by military blockade and military occupation, who steel themselves as the bombs tear through their towns and their neighborhoods and their neighbors, through their traumatized memories, and through their prospective futures when they dare to hope for one.

The comfortable nations often authorize the worst atrocities overseas through fear for their own safety, imagining themselves the victims to be protected from crime at all costs. Such attitudes entitle people in Iraq, Afghanistan and Yemen to look in our direction when they ask, “Who are the criminals?” They will be looking at us when they ask that, until we at last exert our historically unprecedented economic and political ability to turn our imperial nations away from ruinous war, and earn our talk of mercy.

Anticopyright: Editorials and articles originated on TMS may be freely reprinted, disseminated, translated and used as background material, provided an acknowledgement and link to the source, TMS: The Quality of Mercy, is included. Thank you.