What Makes Google’s Eric Schmidt so Afraid? And What Should He Be Afraid of?

21 Nov 2017 – OK, it’s from Russia Today so you should of course not trust it but somehow this video and text and the man in it seems quite factual, not fake and obviously not omitted. 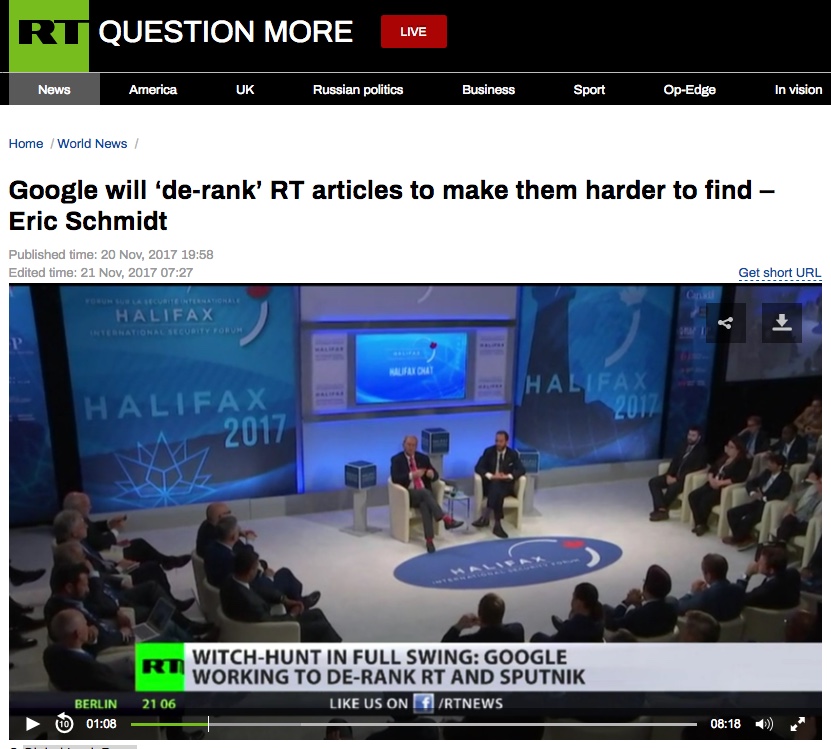 It documents that Eric Emerson Schmidt, the Executive Chairman of Alphabet – an American multinational conglomerate that owns a lot and among them Google – is working on “de-ranking” alleged propaganda outlets such as Russia Today, RT – the world’s third largest television network – and Sputnik.

Who is Eric Schmidt?

On the Wikipedia link you can read more about Mr. Schmidt, one of the richest person on earth, an advocate of net neutrality, a corporate manager and owner of a lot, a collector of modern art, etc. And you can read about his heavy involvement with Hillary Clinton’s recent campaign and the Obama administration and about Schmidt’s involvement with Pentagon, too.

Eric Emerson Schmidt’s name is associated with the world’s largest and most systematic data collecting search engine, Google, that millions upon millions use. School children, teachers, parents, media people, politicians and you and I all daily “google” what we need to know.

While we do that, Google tracks everything about us and if you are searching for a thing to buy, say a camera, be sure that camera ads will shortly after turn up on your screen. And they know everything we are interested in through our “googling” including political interests and hobbies.

This very powerful corporate leader with a open political orientation has decided – as will be seen 58 seconds into the video – that the Internet and his hugely dominating search engine,

In fact, he says in a few words that he – well, not he himself but a computer program and mechanism called an algorithm – shall decide what you are I shall be able to find. Google as Good, Google as God.

Conspicuously, his de-ranking – read censorship – policy shall not hit media (as far as we can understand from this clip at least and not from this backgrounder either) that have, for instance, been using fake news and planted stories, omitted facts and perspectives and sources and told us propaganda and worse about, say, US wars around the world.

It’s Russia’s media. And naturally you ask: Whose next? And where does that end? (“Wherever they burn books, in the end will also burn human beings.” – Heinrich Heine).

This type of political paternalism is not only totally unethical and foolish, it’s a violation of human rights. It cannot be defended with the argument that other countries and media outlets also use propaganda. The Western world – the U.S. in particular – calls itself ‘the free world” and gladly, without the slightest doubts, fights and kills to spread that freedom around the world and has done so for decades.

We humans have right to information without interference – at least if international law counts. Article 19 of the Universal Declaration of Human Rights states states that “Everyone has the right to freedom of opinion and expression; this right includes freedom to hold opinions without interference and to seek, receive and impart information and ideas through any media and regardless of frontiers.”

Mr Schmidt, you are blatantly and clearly interfering in the rights of millions, if not billions, to know. To seek information. To shape their opinions.

With your few words you abuse your almost unlimited digital, political, economic and ‘defence’ power – much much worse than if you had sexually abused just one woman for which older men today are fired or choose to resign.

This has to be stated irrespective of whether we like or dislike Russia and its media. That is not the issue here. This has to be fought against because it is slippery slope, Mr Schmidt.

You ought to stand up and use your powers with principles and vision: To protect the Internet against every and each reduction of freedom. Freedom for all, also the fake news-makers however we define them. Yes, there is another solution for that problem and it is not your paternalism.

It just cannot be for you to decide what is good for others and collect data about us all which is only good for you.

Has the West really become so insecure about itself?

Censorship – de-ranking – and information warfare is not the solution to anything. A strong society or culture that believes in its own moral value and vitality does not censor. Dictatorships – “regimes” – do.

Mr. Schmidt has much more power than many state leaders but he is not up to it and how would he be able to re-rank themes and media again in the future.

Has the West, the US and Western culture become so weak, so trembling at the sight of the global future and so morally deranged that it cannot live with – does not believe it can compete factually and intelligently with – other views? With fake? With propaganda by others? If so, that is where the Soviet Union was in the early 1980s. And if so, watch the writing of the Western walls!

There are much better solutions – if you think. Mr. Schmidt may also google them…

It’s education – education of young and old to learn to identify what is trustworthy and what is not. Learning to learn on the Internet. It is dialogue and it is dignity – instead of succumbing to the lowest of levels that he accuses others of being at.

And there are more solutions.

Making democracy, freedom and human rights stronger – by believing in human beings, their intelligence and solidarity. When Google de-ranks, it de-humanises. It offends the intelligence of the world’s users of the Google search engine.

It sinks to the low level where fakers and liars are – devoid of morals but passionate about selling a particular message even if totally unfounded.

What are you so afraid of, Mr. Schmidt?

If I were Eric Schmidt think I would be afraid of being perceived as a “useful idiot” or an an evil operator on behalf of US militarism – since he is targeting Russia in a the new Cold War atmosphere.

After all is/was a member also of various US government security and Pentagon related boards. And after all, he spoke at the Halifax Security Forum filled with military defence people and hardliners who see only Russia, North Korea and Iran as problems, never the US itself. One of the panels deals with the “Post-Putin Prep”!

Regime change in Russia too in the future and with truthful news from Google?

Mr. Schmidt and his corporate fellows should also be afraid that millions will become more sympathetic to Russia Today, Sputnik and even Russia itself precisely because of his words.

There are no wars on the ground without information war. If Schmidt’s Google fights political wars with de-ranking, many of us will be de-parting to more peaceful, rights-respecting and ethical search engines than his. So until further: