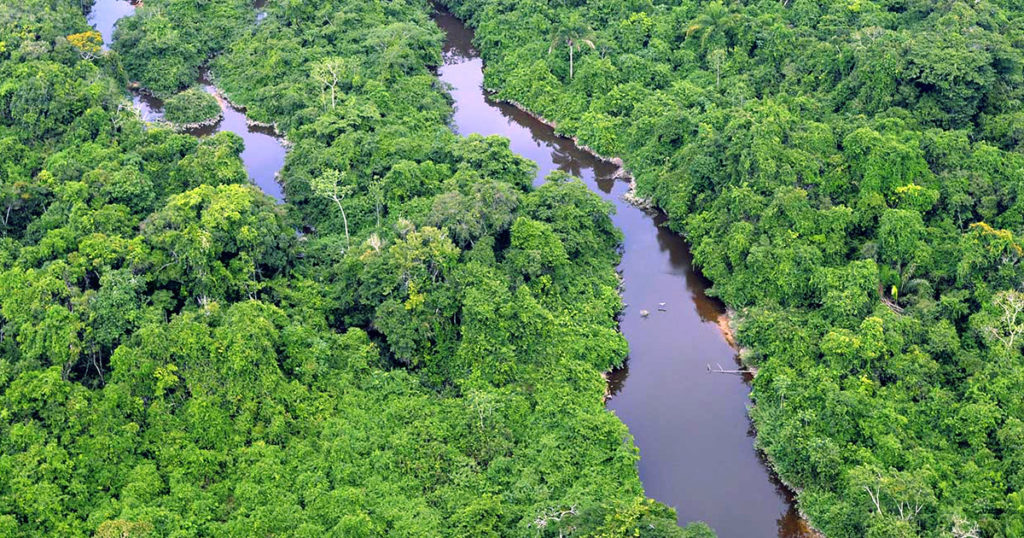 1 Dec 2017 – The World Wildlife Fund announced today that the Program for Protected Areas of the Amazon (ARPA), a joint venture with the Brazilian Ministry of the Environment, has reached the goal of protecting a network of conservation units of at least 60 million hectares in the Amazon. This effort represents the conservation of 15 percent of the biome’s territory in Brazil.

The largest strategy on the planet for conservation and sustainable use of tropical forests, the ARPA program is now present in 117 conservation units, including the categories of national park, state park, ecological station, biological reserve, extractive reserve and sustainable development reserve in the states of Amapá, Amazonas, Maranhão, Mato Grosso, Pará, Rondônia, Roraima and Tocantins.

ARPA works closely with the local communities and invests in the creation, expansion, strengthening and maintenance of conservation units, by ensuring resources and promoting sustainable development in the region. Conservation units that are part of the program benefit from goods, projects and service contracts, such as the establishment of councils, management plans, land surveys and inspection, as well as integration activities with resident communities (in the case of sustainable use conservation units) and their surrounding environment. Overall, the program has supported the strengthening of communities in thirty protected areas.

“The great challenge is to ensure that the units reach their conservation goals, in a participatory and transparent manner, which can be carried out through the support of resources from donations and from the government itself,” stated the Minister of Environment Sarney Filho.

The areas covered by the initiative represent more than 35 percent of the conservation units in the Amazon and contribute directly to the conservation goals established by Brazil in international commitments, such as those undertaken in the Convention on Biological Diversity, in which the country proposes to protect 30 percent of the Amazon by 2020 (equivalent to 126 million hectares). The program also safeguards local biodiversity. From the total of protected units, 39 of them are home to more than 8,800 species, or 88 percent of bird species, 68 percent of mammal species and 55 percent of reptile species of the entire Amazon.

For Sarney Filho, the only alternative to minimize biodiversity losses is to protect conservation areas. “Since Brazil has the largest system of protected areas on the planet today, we hope to surpass the current results in the coming years, by consolidating ARPA’s protected area management system, strengthening the value of the standing forest and the role of traditional peoples,” he said. “We also have the challenge of soon being ready to take on investments in the management of the conservation units, according to the forecast of the program’s third phase goals, which are already in the works.”

Data from the Deforestation Monitoring System in the Legal Amazon indicate that the protected areas supported by ARPA have deforestation rates about 2.3 times lower than in similar conservation units that are not part of the program.

A study carried out by professor Britaldo Silveira Soares Filho from UFMG—the Federal University of Minas Gerais—between 2005 and 2015 showed the effectiveness of the protected areas of the Amazon in the reduction of 30.3 percent of total deforestation in the biome, which were pivotal to avoid about 1.4 to 1.7 gigatonnes of CO2 emissions.

The study also pointed out that the units supported by the ARPA program are responsible for 25 percent of these reductions, equivalent to the annual emissions from global transportation. This shows an effective contribution that the program gives not only to the Amazon, but to the world.

The numbers contribute to international commitments such as those under the Paris agreement, which aims to limit global temperature rise to 1.5° C above pre-industrial levels.

In the same period, ARPA-supported conservation units had a 17 percent management effectiveness increase in protected areas compared to unsupported ones. Data was collected using the Rappam method (Rapid Assessment and Prioritization of Protected Area Management), developed by the WWF Network. The tool makes it possible to identify trends and aspects that must be considered in order to achieve better management effectiveness in a protected area system or group.

“The information points out that the level of effectiveness in protected areas outside ARPA is much lower. In the ARPA conservation units, this number went from an intermediate level of management effectiveness (45 percent) to a high (62 percent) level,” said WWF-Brazil Executive Director Mauricio Voivodic. “More effective management means healthier ecosystems, which in turn enables people, plants and animals to have greater access to water, food and other environmental services,” he added.

According to a study conducted by the program, ARPA-supported conservation units can generate $23 million per year for forest-based local economies. Overall, ARPA supported the strengthening of communities in 30 protected areas.

One of the highlights of the ARPA was the launch in 2012 of the “Commitment to the Amazon—ARPA for Life” initiative, with the objective of ensuring long-term maintenance of the Amazon forest and the protection of biodiversity and environmental services of the largest forest in the world. Through an innovative financial strategy, which included resources from private companies, non-governmental and international organizations, the initiative aims to raise $215 million (more than BRL$ 500 million). With this amount, it will be possible to consolidate and maintain ARPA’s target of 60 million hectares by 2039.

Long-term financing will only be possible through the gradual increase of public resources for the management and administration of conservation units. After a period of 25 years, the government of Brazil will take on 100 percent of the protection costs for these units. A transitional fund will also be created to function as a bridge until the federal and state governments can ensure the permanent maintenance of ARPA-supported conservation units with resources sufficient to cover the necessary investments.

ARPA is designed to function in three phases. It is currently in the third phase (2014-2039). It is implemented by management institutions of federal and state conservation units. It operates through a public-private partnership (PPP) that makes it possible for resources from donations to be fully internalized in Brazil via Funbio, a civil society organization of public interest.

The management structure is composed of the program committee (with representatives from state and federal governments, donors and civil society), the transitional fund committee (with representatives from donors and the federal government) and a scientific advisory panel (composed of specialists in the themes related to the program’s operations).