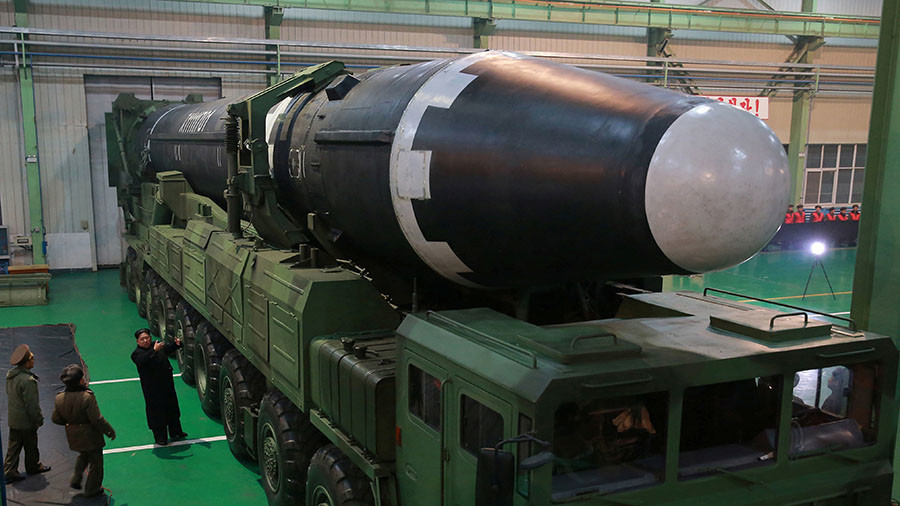 1 Dec 2017 – North Korea is ready to sit at the negotiating table for peace talks if it is recognized as a nuclear power, the Russian delegation to Pyongyang said, adding that the North claims that it was forced to be aggressive and will not stop its nuclear program.

“They [Pyongyang] are ready to talk, however the [North] Korean side has its own condition – it should be recognized as a nuclear power,” Vitaly Pashin, a member of the Russian delegation, told news agencies upon their return. The North is now ready to negotiate with Washington “under parity terms” with the participation of Russia as a third party, he added.

North Korea is capable of hitting any target in the US with its warheads “at any moment,” according to Pashin, who is also a member of the Russian State Duma. Pyongyang claims that it was forced to be aggressive and, following the launch of the ballistic missile, Pyongyang now feels safe. It would never abandon its nuclear program, North Korean officials told the Russian delegation.

Pyongyang fired the Hwasong-15 missile on Wednesday. It splashed down in the Sea of Japan, according to the South Korean, Japanese, and US militaries. North Korea claimed the missile reached an altitude of around 4,475km and flew 950km during its flight, which lasted 53 minutes.

According to a South Korean defence ministry spokesman, the missile is a new type of intercontinental ballistic missile that can fly over 13,000km. “It’s assessed that the flight test was successful,” the spokesman said, as cited by Yonhap news agency. “In the case it were fired at a normal angle, it would be capable of flying over 13,000km. That means it can reach Washington DC.”

READ MORE: ‘If US goes to war against N Korea, Pyongyang will fight back’

If the missile fired on Wednesday was indeed a Hwasong-15, it would represent a new development in Pyongyang’s nuclear program. The other launches that took place in 2017 are understood to have been the older Hwasong-14 ICBM, or the intermediate range (IRBM) Hwasong-12.

“Tipped with super-large heavy warhead,” the missile is “capable of striking the whole mainland of the US,” a statement from North Korea said on Wednesday, as cited by KCNA Watch. The aim of the missile is solely “to defend the sovereignty and territorial integrity of the country from the US imperialists’ nuclear blackmail policy and nuclear threat,” according to Pyongyang.

Moscow condemned the launch, calling it “a provocative act that triggers further escalation and moves us further away from crisis settlement,” Kremlin spokesman Dmitry Peskov told reporters on Wednesday. “We do condemn the launch and hope all the parties will exercise restraint which is so much needed to prevent the situation in the Korean peninsula from going the worst way.”

One Response to “N. Korea Open to Talks if Recognized as Nuclear Power – Russian Delegation to Pyongyang”