If we Canadians think a lasting peace with North Korea will be obtained by insulting and starving the population of that beleaguered country we are as foolish, and as heartless, as those who put their faith in bombs — getting Canadians thinking critically about the latest diplomatic initiative of their government. 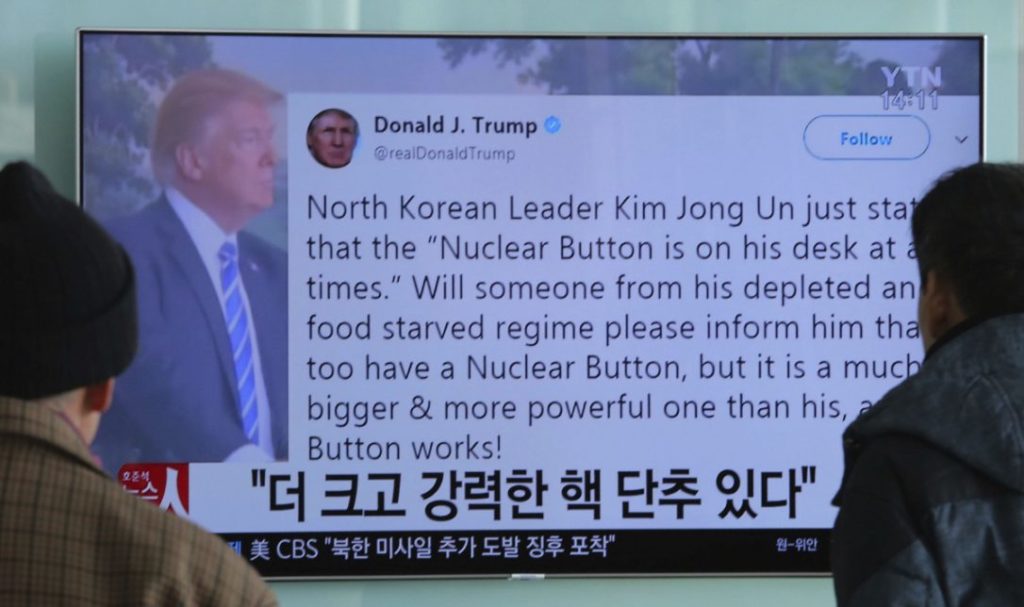 3 Jan 2018 – Donald Trump has now informed the world that he has a bigger nuclear button than the leader of North Korea. It would be funny if the lives of millions were not at stake.

Trump either does not value, or does not understand, diplomacy. Perhaps our country can do better? We learned with happy surprise on Nov. 28, 2017 that our government will host a diplomatic initiative. Excitedly, many of us combed our news sources for the aims and details of this gathering. Thus far the fruits of our labour have been meagre. What will actually happen in Vancouver on Jan. 16?

To opt for diplomacy instead of military force is surely a good thing. And it has been encouraging to read about how Canada may be able to earn North Korea’s trust more easily than the U.S. The comment by one Canadian official that Canada is looking for “better ideas” than those currently before us is another positive sign, as is Trudeau’s suggestion that Canada’s relationship with Cuba might give us a channel through which to talk to North Korea.

But the Vancouver meeting also has unsettling characteristics.

First, Canada’s partner in organizing the gathering is the United States, an implacable foe of North Korea. Trump and his secretary of defence have recently threatened to commit genocide against the DPRK.

Second, most of the countries to be represented in Vancouver are those that sent troops in the Korean War to fight against North Korea. Might not the North Koreans see this meeting as a step in the formation of a Coalition of the Willing, similar to what preceded the invasion of Iraq in 2003?

Third, it appears North Korea will have no spokesperson in Vancouver. But the current crisis is a manifestation of an underlying conflict, and how can that conflict be solved without consulting one of the main antagonists? Will this be like the Bonn process of 2001 that sorted out the Afghan conflict without consulting the Taliban? That has not turned out well.

When Minister of Foreign Affairs Chrystia Freeland talks about the coming meeting she stresses its diplomatic nature, but U.S. Secretary of State, Rex Tillerson, has characterized it as a means to increase pressure on North Korea.

Pressure? The UN Security Council is already putting such extreme pressure on North Korea that its existence as an industrialized country is threatened and its people may face starvation. What state could survive a 90 per cent cut in its oil supply?

But if increasing pressure does not qualify as a “better idea,” what would?

Here are four ideas. We believe they offer the only realistic hope of a genuine peace.

If we Canadians think a lasting peace with North Korea will be obtained by insulting and starving the population of that beleaguered country we are as foolish, and as heartless, as those who put their faith in bombs.

And if we can do no better in Vancouver than talk about “increasing the pressure” on North Korea the world may never forgive us for squandering our opportunity.

Christopher Black is an international criminal lawyer on the list of defence counsel at the International Criminal Court.

Prof. Graeme MacQueen is co-editor of the Journal of 9/11 Studies and co-author, with Johan Galtung, of Globalizing God-Religion, Spirituality and Peace, TRANSCEND University Press, 2008.MacQueen was founding director of the Centre for Peace Studies at the McMaster University in Hamilton, Ontario, where he taught for 30 years. He holds a Ph.D. in Buddhist Studies from Harvard University and is a member of the TRANSCEND Network for Peace Development Environment. MacQueen was an organizer of the Toronto Hearings on 9/11, is a member of the Consensus 9/11 Panel, and is a former co-editor of the Journal of 9/11 Studies.