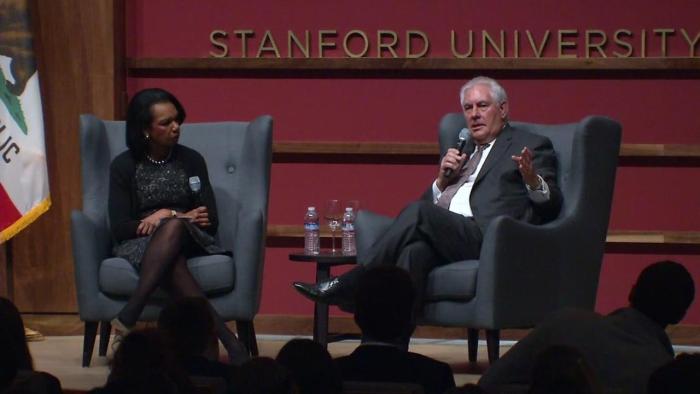 19 Jan 2018 – Most media covering the speech that US Secretary of State, Rex Tillerson, gave at the Hoover Institution on January 17, 2018 merely points out that he said that the United States would stay in Syria – open-ended – in the future and until President Bashar al-Assad has left the scene. Read the full speech here.

Reuters even twists it all to mean that the US is now more patient about Assad’s removal.

Before I continue, it is a significant sign of the Western crisis, including moral and legal decay, that it raises few eyebrows – and none in NATO circles – that a top official of the leader of the Western world:

Irrespective of what we may think of Syria, this is little but a full-scale assault on international law and the normative system embedded in the UN Charter that has taken decades of hard work to build, a fundamental cornerstone of the management and civilizational development of the world order system.

Seen in comparison with the other attempts at undermining the UN – which began in the 1990s in Bosnia-Herzegovina – this should be a cause of deep concern among people in the truly civilizational corners of our world.

If there is anyone who can talk the US to some sense these days, it must be allies and friends predominantly in NATO and the EU. But will they?

Although held at Stanford University – and therefore supposed to contain some kind of decent academic-intellectual analysis – Tillerson’s presentation is from such perspectives incredibly poor.

Although he says that he will give “a broad historical and political context”, there is neither broadness, nor history nor context. Indeed, just a few words later he starts out in this manner which offers the framework for the rest of what he says:

For nearly 50 years, the Syrian people have suffered under the dictatorship of Hafez al-Assad and his son Bashar al-Assad. The nature of the Assad regime, like that of its sponsor Iran, is malignant. It has promoted state terror. It has empowered groups that kill American soldiers, such as al-Qaida. It has backed Hizballah and Hamas. And it has violently suppressed political opposition…

and on an on it goes.

If this is the best history, context and analysis of what the underlying conflicts and the reasons for all the violence in Syria are that the United States of America’s top foreign policy official can muster you may ask at least two questions: What is so terribly deficient, narrow-minded and self-serving about US academia in this field? Or is that academic world actually excellent but not listened to at all in decision-making circles and why did he make that speech at a university?

I don’t know what the answer is, perhaps it is a combination of the two? But as a professor in peace and conflict studies I would ask an undergraduate student making writing such a piece of history and conflict analysis to read a couple of books more and come back to me with a revised paper. I would not let that student pass the exam.

Interestingly, the transcript of the speech reveals that the audience had no chance to ask questions or otherwise debate with the speaker. After Tillerson’s speech there is only a conversation between him and former foreign secretary,  Condoleezza Rice. That’s unusual at a university where free debate should reign.

Secondly, there is nothing that indicates that Tillerson has a grasp on how his “strategy” for Syria relates to a more comprehensive policy for the Middle East region as a whole.

He doesn’t mention – for understandable reasons, you may say – that the US also has some other policies and goals for its future presence in Syria such as building permanent bases – in a kind of base race with Russia – and supporting Kurdish forces in the Syrian side of the border to Turkey – the second largest military power in NATO that is of course furious and calls it a terrorist army that it is ready to fight.

It will only push Turkey closer to Russia and eventually and predictably Turkey will turn its back completely on Europe and leave NATO.

We’ve of course seen it all before. It’s about bases (like, say, Kosovo), about control of resources (like, say, Iraq), about regime change (like, say Saddam Hussein and Moamar Khadafi) and it’s about the exceptionalist belief that God’s own country has God’s mandate to create US Imperial peace everywhere – no matter how many times it has already gone madly wrong and no matter how many innocent people are killed and wounded in the process.

He also does not mention that the US under the Trump administration has chosen to promote and support the new fundamentalist Islamist-Zionist team, Saudi-Arabia and Israel, supported by the Gulf States, to gang up against the Iran that is seen as a huge threat to the US, the world and the region. But which – unfortunately for that view – isn’t.

It is conspicuous in that this otherwise totally split and in-fighting administration/Deep State is united in basically in one thing: hating Iran. Iran is also about the only issue where President Trump holds the same views while he was in the campaign as he does now he is in the White House.

Furthermore, the Trump administration is doing nothing but undermining the welfare of the Iranian people (and supporting the hardliners and corrupt sectors) by means of the sanctions that are still in function through financial mechanisms. And coming up repeatedly with nonsensical perceptions of the country and permanent threat à la all options are on the table.

That is going to go madly wrong too, sooner or later.

Much can be said about Tillerson’s speech. If it wasn’t coming out of the world’s strongest military power – but now losing on all other power scales – nobody would bother to read it. But you should! (Or see it below on video which also reveals how ritualistic the whole event is from the intro by the Hoover president and onwards).

Heartbreakingly, it spells prolonged hell for fellow human beings in Syria and – open-ended – troubles for Iran and its people.

Its peace-and-military stability philosophy is a fake as fake can be. Peace means war, open-ended war.

Can anything good be said about it?

Probably only that this type of policy will eventually become the famous nail in the US Empire’s coffin. Thereafter, both the US Republic and the world will be a much better place.

But wouldn’t it be so much better for all of us if that piece of history could unfold in a peaceful, intellectually honest and moral manner instead of open-ended warfare to the end?

The day after this was published the New York Times carried this editorial.