Maung Zarni: Myanmar Feels like a Big Cage for Rohingyas

Maung Zarni is a Myanmarese academic exiled in the UK who is an activist, commentator and expert on Myanmar. He is currently a scholar with the Documentation Centre of Cambodia at the Sleuk Rith Institute. In an exclusive interview with the Dhaka Tribune, he talks about the Rohingya repatriation to Myanmar which, he says, from the Myanmar army’s perspective is a tactical retreat in the face of heavy artillery of international condemnations, criticisms and reimposition of sanctions, and it might take around 10-20 years to complete. 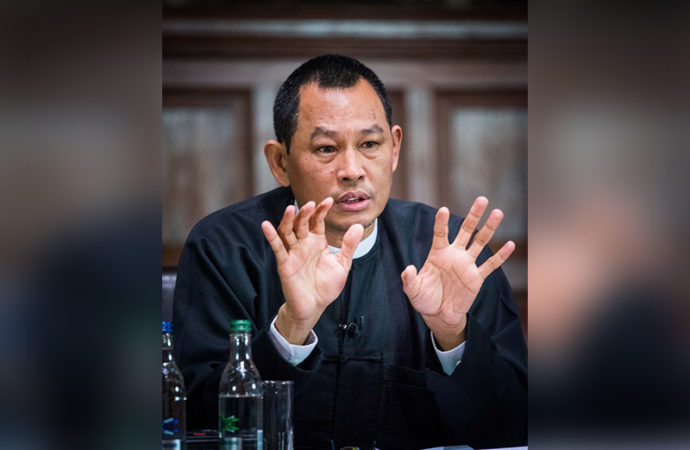 19 Feb 2018 – Over 688,000 Rohingya entered Bangladesh between August 25, 2017 and February 11, 2018, after Myanmar security forces launched a brutal crackdown against the mainly Muslim minority – following militant attacks on border outposts and an army base by insurgents.

As agreed between Bangladesh and Myanmar on November 23, the Rohingya repatriation process was supposed to start on January 23. However, it was delayed, and on Friday (February 16), Bangladesh handed over its first list of 1,673 Rohingya families (8,032 individuals) to Myanmar to start the first phase of repatriation to their homeland.

Do you think the Rohingya repatriation ever will take place?

Yes, the repatriation will take place because both Dhaka and Naypyidaw wants it. Dhaka wants it to take place because the pressure of 688,000 (in addition to the pre-existing Rohingya refugees from the previous waves since 1991) needs to be relieved and wants to set the new process of reducing the number of Rohingyas from its soil. Myanmar wants repatriation because it wants to show the world that its intention is not genocide or ethnic cleansing, and it has this mistaken belief that taking back the Rohingyas who survived the Myanmar troops’ mass-slaughter will make it difficult for the world to press charges of ethnic cleansing or genocide. As the former Governor of New Mexico Bill Richardson, the veteran US envoy and diplomat, said it openly: “Repatriation is a big whitewash,” of Myanmar’s international state crimes against Rohingya. From the Myanmar military’s perspective repatriation is a tactical retreat in the face of heavy artillery of international condemnations, criticisms and reimposition of sanctions.

Well, there are estimated one million Rohingyas who fit the textbook example of refugees – although Dhaka chose to invent its own term “displaced people of Myanmar,” even under the most conducive circumstances it will take 10-20 years, especially at the rate Myanmar side wants to receive.

Do you think the Rohingya people’s return will be “safe, voluntary and dignified”?

Absolutely not. I actually avoid that international mantra coming from INGOs, UN agencies and governments following Kofi Annan’s phraseology. How can the return ever be “safe, voluntary and dignified” for a million people whose physical, cultural, economic, social and intellectual existence, as a minority community has been completely and intentionally destroyed from its very foundations? Myanmar military burned nearly 350 villages systematically in a region stretching 100 kilometres within several months. Myanmar’s Commander in Chief Min Aung Hlaing viewed – and officially told the nation of anti-Rohingya racists – that the army is engaged in completing the “unfinished business” from the WWII. I will say the “finished business” is charred villages where any physical traces of Rohingyas are being bulldozed. Those thousands of Rohingya who still remain inside Myanmar today just told the Canadian Special Envoy to Myanmar, Bob Rae, last week that they feel like they are “in a big cage” where they have absolutely no freedom of movements for accessing food, medicine, jobs, etc. I want to ask those politicians and officials who spit out this mind-numbing delusional phrase, why they are knowingly pussyfooting around Myanmar’s blatant violations of the Genocide Convention – an inter-state treaty, and focusing on sending the Rohingya survivors back to what really is a vast complex of past and future concentration camps inside Myanmar.

What role can the UNHCR play?

UNHCR is primarily mandated to protect Rohingyas. Its leadership has been doing a good job, telling the Security Council – and the world at large – the unpalatable truth being that the conditions inside Myanmar are absolutely non-conducive to any form of return of Rohingyas. It should continue to discharge its main mission of protecting and promoting the well-being of the one million Rohingyas on Bangladeshi soil. It should persuade Dhaka to accept Rohingyas as legally defined refugees and genocide survivors – not simply “forcibly displaced persons from Myanmar.”

The military has all the power to end the persecution of Rohingya. But the military will not cease the genocide because it has since late 1960’s institutionalized the eradication of Rohingyas from the group’s very foundations on the false, racist and paranoid ground that they are Bangladesh’s “proxy” Muslim population inside the strategic Western region. Suu Kyi’s civilian leadership shares these paranoid and anti-Muslim racist policies as well. The difference between the Myanmar generals and Suu Kyi government, particularly Suu Kyi herself, is not in kind, but in degree. This is the racist woman who cannot bring herself to respect the right of Rohingya to self-identify as Rohingya or cannot embrace the truth that Rohingyas are a part of Myanmarese society at large, despite her Oxford education and decades of life in liberal western societies. It’s no longer about whether if Suu Kyi had more power would she have been able to end it. The fact is whatever limited power the civilian government has it uses it to deny, dismiss and cover up the military’s crimes against humanity and genocide against Rohingyas. Remember, Suu Kyi has consistently praised the ethnic cleansing and Myanmar army for “doing a good job.”

How effective do you think are the recommendations made by the Advisory Commission?

Absolutely zero effect, despite the loud chorus of support from UN and government quarters for its recommendations. To start with, the military did not welcome Kofi Annan’s involvement from day one at all. It attempted to derail, block or otherwise mitigate the commission’s influence on policy and public opinion. As a matter of fact, it was Myanmar military that was determined to kill the final report upon delivery in August 2017: Annan’s recommendations stand in the way of the military’s attempt to complete its “unfinished business.” One has to be absolutely delusional and stupid not to see how this report plays right into the hands of the Myanmar generals. The military strategists simply honey-trapped the young, primitively armed angry Rohingya militants to attack a few military and police outposts as they wanted the pretext to launch the large scale genocidal campaign of terror within a few days of Kofi Annan’s report.

My reading of the turn of events since August 26, 2017 stands in sharp contrast with the mainstreamed but patently false view that ARSA triggered these military operations by Myanmar that led to the displacement of 688,000 Rohingyas, burning of nearly 350 villages. ARSA is no Hamas in terms of its capacity or strength. Not even Israel has inflicted this level of genocidal destruction of its target. Myanmar is worse than Israel.

Lt General Kyaw Swe, the home affairs minister, who was in Dhaka on an official visit mentioned that Myanmar was keen to implement a few Annan Commission recommendations. It is a complete act of deception. When the military failed to derail Kofi Annan commission’s work, it attempted to use Annan as its outermost shield internationally. The ex-major and Myanmar spokesperson Zaw Htay said this openly.

What should be done to ensure the security and basic rights of the Rohingya people?

In the short run, the world needs to monitor the Rohingya’s plight very closely. Four types of large Rohingya populations exist today: 307,500 pre-existing Rohingya refugees and 688,000 new arrivals in Bangladesh; nearly half a million inside Myanmar among whom 120,000 are in IDP camps where they are languishing in inhuman conditions; then there are Rohingyas in vast open prisons in areas that are not yet attacked or destroyed by Myanmar military and its Rakhine local militia and vigilantes. Dhaka needs massive infusion of humanitarian assistance both in cash and in kind so that no public health epidemics break out in these large refugee areas of Cox’s Bazaar and Chittagong. 100,000 Rohingyas who are apprised as the most vulnerable as soon as the monsoon season begins, need urgent assistance with relocation, and material support.

In the long run, the only viable safeguard for Rohingyas against Myanmar’s evidently genocidal national policies is to help establish North Arakan sub-region – which has been predominantly Rohingya since Myanmar’s independence – and historically, as UN-protected self-administered Rohingya home. Of course, Myanmar will resist any attempt to help put Rohingyas back on their own ancestral soil. But no genocides ever end without the intervention of some sort from outside power. The Security Council will never authorize intervention although it is tasked with the principal duty of promoting peace and protecting world’s population. Just remember how Bangladesh was liberated from the nasty genocidal attacks by West Pakistan in 1971. Bangladesh had 12 million Bengali or East Pakistani refugees back then. Now you are a nation with a vibrant economy.

Rohingya people deserve and need a piece of earth they can call home, where they can be Rohingya, where they go to school, access medical services, have proper villages, tend to their farms and look after their families – without having to fear being locked in this cycle of large scale terror and violence, forced repatriation, living in “big cages” inside Myanmar – until the next waves of killing and destruction comes.