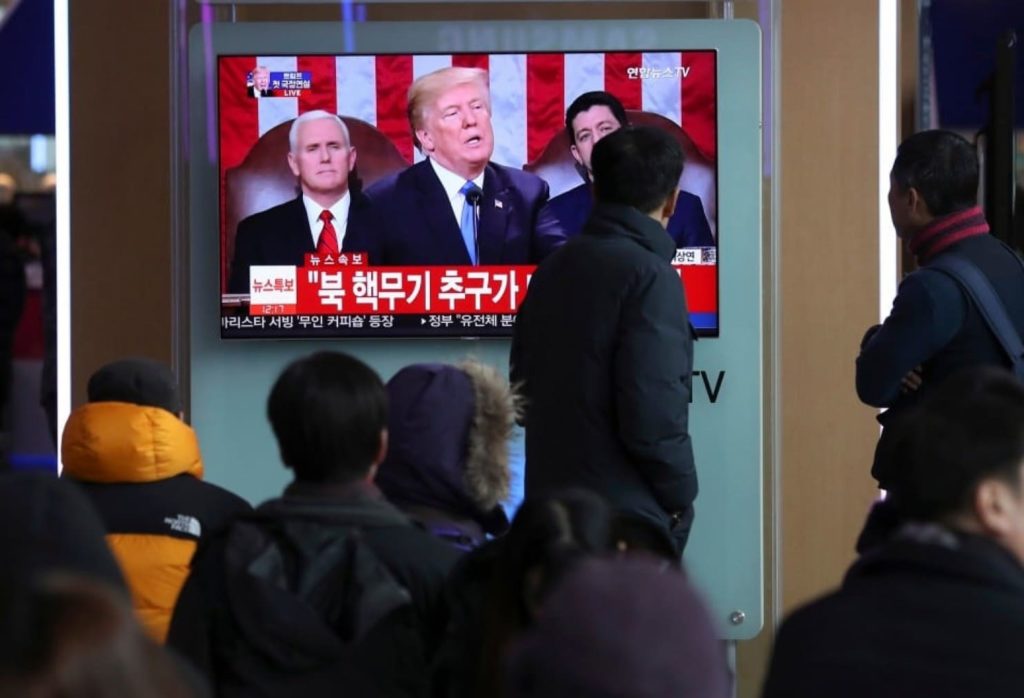 People at the Seoul railway station in South Korea watch President Trump’s State of the Union address on Jan. 31. The letters on the bottom of the screen read, in part, “North Korea’s nuclear weapon pursuit.” (Lee Jin-man/AP)

31 Jan 2018 – Shortly before President Trump used his State of the Union speech to criticize North Korean human rights abuses — even bringing out one remarkable defector, Ji Seong-ho, who escaped terrible conditions in that country — Pyongyang released its own criticism of the United States as a “gross violator of human rights.”

A summary of a report titled “White Paper on Human Rights Violations in the U.S. in 2017″ was released by the Korean Central News Agency today. Separately, Reuters reported that North Korean diplomats in Geneva were circulating the report, which is said to be written by the Institute of International Studies in the Democratic People’s Republic of Korea.

The KCNA summary begins with a number of pointed criticisms of the Trump administration, noting that members of his Cabinet are “billionaires from conglomerates” and stating that the total assets of “public servants at the level of deputy secretary and above” exceed $14 billion.

“The anti-popular policies the Trump administration pursued openly in one year were, without exception, for the interests of a handful of the rich circles,” the report states.

The report also argues that the United States has experienced a “crackdown on the press” over the past year and says that racial tensions have worsened in the country since Trump took office. Citing statistics about unemployment and homelessness, the KCNA summary says that an “absolute majority of the working masses, deprived of elementary rights to survival, are hovering in the abyss of nightmare.”

A number of other statistics about student debt, sexual abuse and the lack of paid maternity leave in the United States are also included.

“According to data, the number of marijuana users in the U.S. was more than 20 million, a 3 percent increase as compared with that a decade ago,” the KCNA summary noted in a section about drug abuse in the United States.

Since at least 2014, North Korea has released reports on alleged U.S. human rights abuses — an apparent response to criticisms of Pyongyang’s own human rights abuses from Washington and the United Nations. Most have featured statistics that appear to have been culled from the Internet, with overwrought descriptions of life in the United States that are typical of North Korean propaganda. “The U.S. is a living hell as elementary rights to existence are ruthlessly violated,” a 2014 report noted.

As in previous instances, the North Korean report does not include any reference of the fact that its own human rights record can be criticized along the same lines. The economic disparity between North Korean elites and the average citizen is thought to be enormous, for example, while there is no real concept of a free press in a country where propaganda is all-encompassing.

A U.N. Commission of Inquiry concluded in 2014 that about 120,000 people were kept in political prisons comparable to the Gulag system in the Soviet Union. Pyongyang has refused to allow foreign human rights groups access to these camps, though their existence can be confirmed by survivors’ accounts and satellite imagery.

North Korea’s own summary of its human rights record, also released in 2014, said that its citizens “feel proud of the world’s most advantageous human rights system.”

As in previous reports, this year’s white paper on U.S. human rights abuses accused the United States of running a “human rights racket” and said Washington could “never camouflage its true identity as the gross violator of human rights.”

Correction: This post originally stated that the report came out after Trump’s State of the Union address. It has been corrected to show that it was released on KCNA shortly before Trump spoke.

Adam Taylor writes about foreign affairs for The Washington Post. Originally from London, he studied at the University of Manchester and Columbia University.