Eliminate Nuclear Weapons by Divesting from Them

We will not invest in our annihilation. Now we can avoid it. 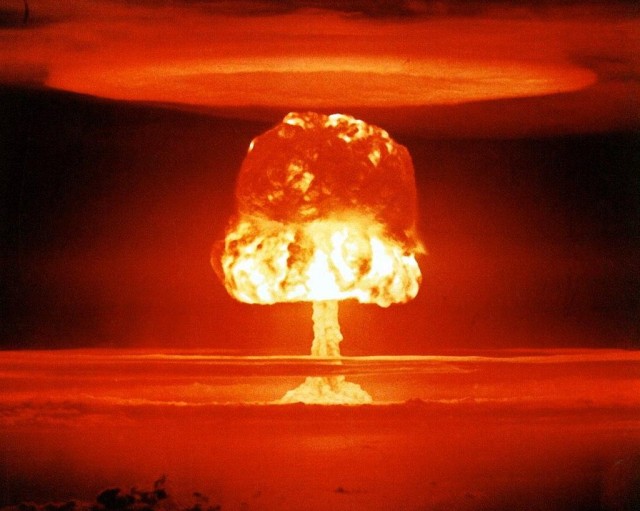 19 Mar 2018 – Our world and everything we care about is threatened every moment of every day by nuclear weapons, either by intent, accident, miscalculation or cyber-attack. These weapons, though now illegal following the July 2017 U.N. “Treaty on the Prohibition of Nuclear Weapons”, adopted by 122 nations, continue to be modernized at an expected cost of $1.7 trillion over the next 30 years.

Like the Parkland students victimized by inaction of the previous generations, the non-nuclear nations have declared enough­—they will no longer be bullied and held hostage by the nine nuclear nations. Now is the time to stop the insanity and divest of nuclear weapons just as apartheid was ultimately stopped by divestment in South Africa. If we want to abolish nuclear weapons, we must stop investing in them. The just released “Don’t Bank On The Bomb“ report draws attention to the “Hall Of Shame” companies that are either financing or producing nuclear weapons and their components.

There are 20 principal companies involved in the manufacture, development, production, and modernization of these weapons and 329 significant investors the world over who are financing this work investing over $525 Billion in the last three years. The top three US investors include Blackrock, Capital Group and Vanguard and have a combined investment of more than $110 billion.

It is an obligation for each of us to review our financial institutions’ investments and retirement funds to identify whether or not we are inadvertently investing in these companies. Just as in the recent outcry regarding the financing of the NRA, which not coincidentally has been funded by many of the same companies, has led to divestment and disassociation with and by these companies, so to it must be for the companies that fund, develop and manufacture nuclear weapons.

Each of us has a responsibility to stigmatize these companies by speaking up, contacting these institutions and telling them that it is not right for them to be making a profit from the production of nuclear weapons which threaten our very existence, and to demand that they cease and desist in the words of Medea Benjamin and, “stop making a killing by killing.”

From the report: “Financial institutions and weapons producers have a choice, either to contribute to the end of nuclear weapons, or to provide the financing that will allow nuclear weapons to end us”.

With the recently released Trump Nuclear Doctrine which significantly seeks to expand nuclear weapons spending and capacities in the US over the coming years, as well as lowering the threshold for use, all of the other nuclear nations are following suit and modernizing their arsenals. The world is faced with the greatest threat of nuclear war since World War ll.

In a functioning democracy, we the people will decide – either by action or inaction. We can sit back and assume that “we cannot make a difference” or leave it to “them,” or we can make our voices heard realizing that “they” is us and demand an end to nuclear weapons.

We can take a step by endorsing the “Back from the Brink” resolution rapidly spreading across this nation to prevent nuclear war, while simultaneously divesting from nuclear weapons. Ultimately, nuclear weapons will be abolished. They will either be abolished through the means outlined in the “Treaty on the Prohibition of Nuclear Weapons” and by divesting from them or, through their use in nuclear war, the aftermath of which may end all of life on this planet.

The choice is ours. Our children and the future of the planet demand abolition now.

Robert F. Dodge, M.D., serves on the boards of the Nuclear Age Peace Foundation, Beyond War, Physicians for Social Responsibility Los Angeles, and Citizens for Peaceful Resolutions, and writes for PeaceVoice.

Anticopyright: Editorials and articles originated on TMS may be freely reprinted, disseminated, translated and used as background material, provided an acknowledgement and link to the source, TMS: Eliminate Nuclear Weapons by Divesting from Them, is included. Thank you.

One Response to “Eliminate Nuclear Weapons by Divesting from Them”