May the soul flourish;
May youth be as the new-grown grain

Navroz, usually celebrated on 21 March in Iran and Central Asia, is the “New Day”, the end of the old year with its hardships and deceptions and the start of the New Year to be filled with hope and optimism. With each periodical festival, the participants find the same sacred time – the same that had been manifested in the festival of the previous year or the festival of a century earlier. It is a day for spiritual renewal and physical rejuvenation and is usually a time for reciting devotional poetry, presenting food with symbolic meaning to guests, and visits among family and close friends. 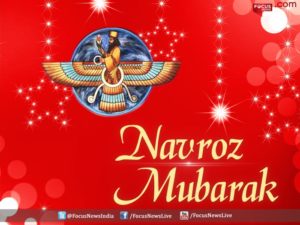 Navroz, which coincides with the Spring Equinox, is related to myths focused on the sun and thus symbolizes the connections of humans to Nature.  In some of the myths, Navroz is considered as symbolizing the first day of creation  − thus a time when all can be newly created. It is a day between times − old time has died; new time will start the day after Navroz.  In this one-day period without time, all is possible.  The seeds are planted for a new birth.  Among some who celebrate Navroz, real seeds are planted, usually in seven pots with symbolic meanings of virtues.  Their growth is an indication of how these virtues will manifest themselves in the coming year.  Among those influenced by Islam and Christianity, Navroz is the day when God will raise the dead for the final judgment and the start of eternal life.

Navroz has an ancient Persian origin, related to Abura Mazda, the high god who was symbolized by the sun and manifested by fire. Navroz is also related to the opposite of fire, that is, water.  However water can also be considered not as opposite but as complementary, and thus fire-water can become symbols of harmony.  Fire – as light, as an agent of purification, as a manifestation of the basic energy of life − played a large role in Zoroastrian thought and in the teachings of Zarathoustra.  Thus we find fire as a central symbol and incorporated into rituals among the Parsis in India, originally of Iranian origin.

From what is today Iran, Zoroastrian beliefs and ritual spread along the “Silk Road” through Central Asia to China, and in the other direction to the Arab world.  As much of this area later came under the influence of Islam, elements of Navroz were given Islamic meanings to the extent that some today consider Navroz an “Islamic holiday”. Navroz is also celebrated among the Alawits in Syria, the Baha’i, the Yezidis, and the Kurds, each group  adapting Navroz to its spiritual framework.

In Turkey, for many years, Navroz was officially banned as being too related to the Kurds and thus to Kurdish demands for autonomy or an independent Kurdistan. I recall a number of years ago being invited to participate in a non-violent Kurdish protest in Turkey on Navroz to protest the ban. I declined as the idea of going from Geneva to be put in a Turkish jail was not on top of my list of priorities.  Fortunately, for the last few years, the ban has been lifted.

Navroz was marked this year in the Syrian Kurdish area of Afrim by the arrival of Turkish troops and their Syrian allies. One of the first acts of the Turkish troops was to pull down and destroy a statue of Kawa, a mythological founder of the Kurdish people. In the myth, Kawa is a blacksmith who melted iron to make swords and liberate the people from an evil ruler who had been helped by spirits.

This year Navroz was also the end of a seven-year cycle begun in March 2011, the uprising and then war in Syria.  Seven years in many traditions is a significant number.  Thus Navroz as a day outside of time was a moment of reflection on the armed conflict in Syria, and on our inability as peace makers to facilitate negotiations in good faith.  Now, a new cycle of secular time has begun, made even more complex by the arrival of Turkish troops.

The armed conflict in Syria is complex with outside official players: Iran, Russia, USA, Turkey, the United Nations, the Arab League and more shadowy characters: the Islamic State, a host of intelligence agencies, money and fighters from a variety of sources. We find some of the same players in the war in Yemen.  There is, however, agreement among all that killing those who disagree is the only realistic policy.  It is a very old and wide-spread idea found in most cultures.  The techniques of killing have become more sophisticated – drones and car bombs – but the idea has remained the same and is easily understood.

In contrast, ideas of conflict reduction through changes in structure are more complex: broadening the base of the Syrian government by bringing in individuals from groups largely excluded, creating con-federal forms of association among the Kurds without necessarily creating a separate State, creating a cosmopolitan, humanist society which meets the basic needs of all.  Moreover, we on the outside can suggest approaches, but the effort will have to be made by local people.

Those who advocate (and carry out) killing have funds and staff which conflict resolution non-governmental organizations lack.  Yet conflict resolution efforts must continue and grow stronger.  A new, even more complex cycle of time has started. The old approach of killing those who disagree remains strong. Yet, I believe that there are possibilities of renewal and cooperative action for a more peaceful and just wider Middle East.

Anticopyright: Editorials and articles originated on TMS may be freely reprinted, disseminated, translated and used as background material, provided an acknowledgement and link to the source, TMS: Navroz: Turkish Troops in Afrim – Renewal and Complexity, is included. Thank you.