Teen Solidarity against the Merchants of Death

1 Mar 2018 – Here in Kabul, as the rising sun begins to warm our chilly rooms, I hear excited laughter from downstairs. Rosemary Morrow, a renowned Australian permaculture expert, has begun teaching thirty-five young students in a month-long course on low-resource farming.

In war-torn Afghanistan, there’s a desperate need to rebuild agricultural infrastructure and help people grow their own food. People verging on despair feel encouraged by possibilities of replenishing and repairing their soil.

The night before, over dinner, one of the students discussed news from his home town in Afghanistan’s Wardak province about U.S. aerial attacks. “The blasts have become so frequent,” he said, “that people can’t find spaces to bury their dead.”

During breaks in the class, I tell some of the Afghan Peace Volunteer students about the school shootings in the United States, and the remarkable determination of teenagers from Florida to demand that lawmakers take action on gun control.

These Afghan students have also heard about Black Lives Matter activists who have been tear gassed and beaten when they’ve demonstrated against police brutality. The Afghan teens identify with the activists facing danger, but still standing up to insist on change.

I asked if they thought that the U.S. media and government would heed Afghan young people raising their voices asserting their anguish and fear regarding U.S. aerial attacks and drone assassinations.

“You’re dreaming,” said Hamid. He flashed me a warm smile and shook his head, saying, “no one will ever listen to us.”

The outrage now directed toward the National Rifle Association should also challenge all assaults made by the U.S. military.

Nasir, a third-year university student who majors in mapping technology, tells me he thinks teens in the United States have a chance to be heard. Like Habib, he doubts that the same is true for Afghan voices seeking to end the sixteen-year-old war.

But Zainab, a high schooler in the permaculture class, added that she thinks it would be great to record a vigil of teenagers in Kabul sending their support for U.S. teenagers who’ve survived school shootings in the U.S. and who’ve begun shaming the adult world into action on the issue of gun violence.

The outrage now directed toward the National Rifle Association should also challenge all assaults made by the U.S. military.

People often tell me they believe the U.S. military remains in Afghanistan because it wants to eventually control mineral wealth and other resources. But right now, weapon manufacturers like General Atomics and Boeing — which supply the U.S. base in Kandahar with drones, missiles and bombs — are profiting from the perpetuation of war. This profit gives them common cause with arms manufacturers like Sturm Ruger and Sig Sauer earning millions from equipping U.S. police forces as well as deranged killers in U.S. classrooms.

Yesterday, I read about U.S. aviation brigades training in Colorado’s Fort Carson for possible Afghan deployment: 2,000 troops, part of an exercise called “Eagle Strike,” are preparing for attacks with ground-pounding weapons. The Kandahar base in Afghanistan now has three squadron’s worth of MQ-9 Reaper drones. Costing $65 million each, these drones are outfitted to carry 560-pound GPS laser-guided bombs as well as Hellfire missiles.

Why fill the landscape of any country with craters and graves? What could we possibly hope to harvest?

Zainab tells me she thinks the teenage generation is changing and that more young people believe in training individuals and nations to avoid killing.

“Why can’t we devise sustainable ways to bring about peace?” she asks.

I consider the idea that international teen solidarity could challenge both the U.S. military and the National Rifle Association to end assaults on human life. “Our goal must be to demand that every person around the world agree to stop producing and using weapons,” says Nasir.

I sit with them, and reflect on these courageous, clear-eyed Afghan and U.S. youth working in both countries to sow seeds that bear needed fruit, hoping they can change the adults as well. 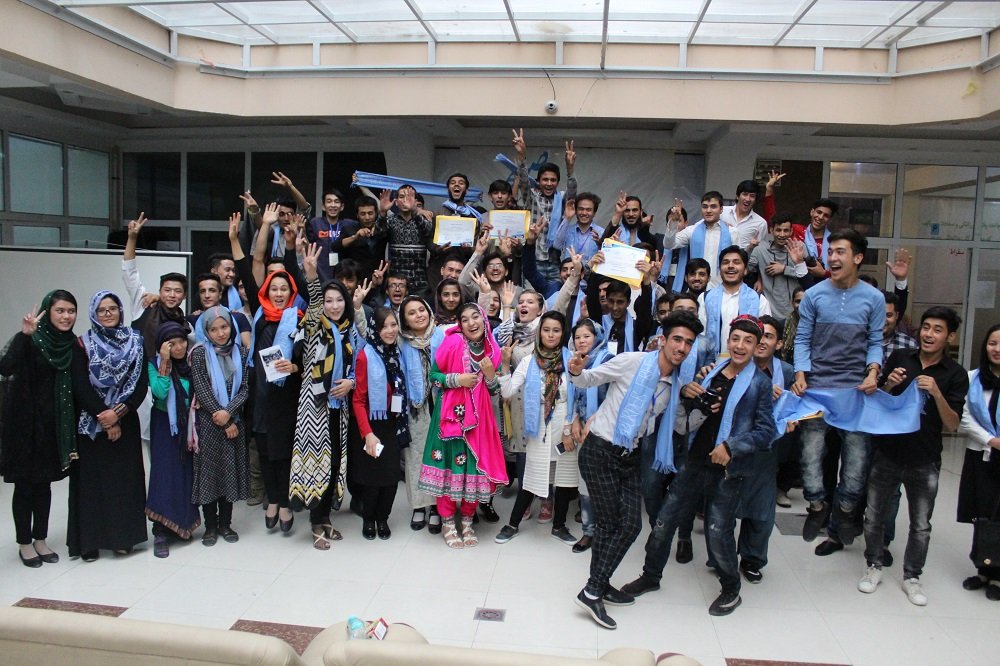 This article first appeared in The Progressive magazine.

Anticopyright: Editorials and articles originated on TMS may be freely reprinted, disseminated, translated and used as background material, provided an acknowledgement and link to the source, TMS: Teen Solidarity against the Merchants of Death, is included. Thank you.