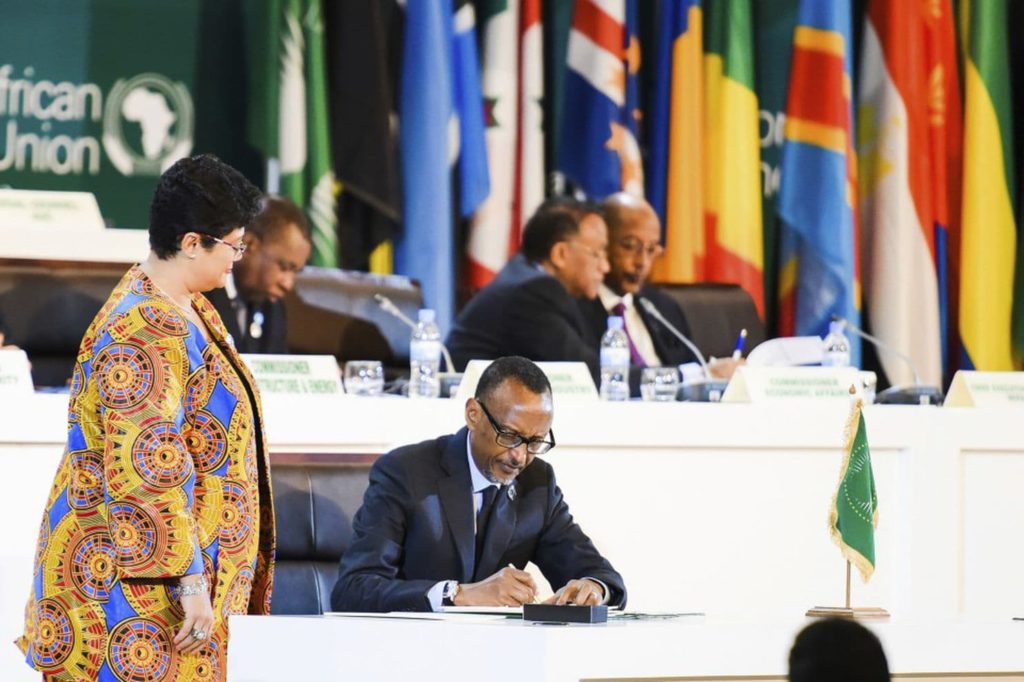 29 Mar 2018 – As of last week, there is a new global trade player, the African Continental Free Trade Area (AfCFTA). On Mar. 21, 44 African heads of state and government officials met in Kigali, Rwanda, to sign the framework to establish this initiative of the African Union.

The AfCFTA will come into effect 30 days after ratification by the parliaments of at least 22 countries. Each country has 120 days after signing the framework to ratify.

This will be one of the world’s largest free-trade areas in terms of the number of countries, covering more than 1.2 billion people and over $4 trillion in combined consumer and business spending if all 55 countries join. Here are four things you need to know about the AfCFTA.

1) What is the AfCFTA and how did it come about?

It creates a single continental market for goods and services as well as a customs union with free movement of capital and business travelers. The African Union agreed in January 2012 to develop the AfCFTA. It took eight rounds of negotiations, beginning in 2015 and lasting until December 2017, to reach agreement.

The A.U. and its member countries hope the AfCFTA will accelerate continental integration and address the overlapping membership of the continent’s regional economic communities (RECs). Many African countries belong to multiple RECs, which tends to limit the efficiency and effectiveness of these organizations.

The East African Community and the Economic Community of West African States have made some progress toward achieving subregional economic integration. But most RECs are underperforming, with a low level of compliance by member states, which has delayed successful integration.

2) What will the AfCFTA do, exactly?

One of its central goals is to boost African economies by harmonizing trade liberalization across subregions and at the continental level. As a part of the AfCFTA, countries have committed to remove tariffs on 90 percent of goods. According to the U.N. Economic Commission on Africa, intra-African trade is likely to increase by 52.3 percent under the AfCFTA and will double upon the further removal of non-tariff barriers.

[ Four things you should know about food security in Africa ]

By promoting intra-African trade, the AfCFTA will also foster a more competitive manufacturing sector and promote economic diversification. The removal of tariffs will create a continental market that allows companies to benefit from the economies of scale.

Countries, in turn, are likely to be able to accelerate their industrial development. By 2030, Africa may emerge as a $2.5 trillion potential market for household consumption and $4.2 trillion for business-to-business consumption.

Who stands to gain the most? African nations with large manufacturing bases, such as South Africa, Kenya and Egypt, would receive the most rapid benefits.

3) What key challenges lie ahead for the AfCFTA?

The A.U. hopes to create a single common market embracing all countries in Africa. However, only 44 countries have signed the AfCFTA’s establishing framework to date. And just 30 nations have signed the Free Movement Protocol — signifying the free movement of people, right of residence and right of establishment.

The most prominent non-signatory of the AfCFTA is Nigeria, which has one of the largest economies in Africa. Nigerian President Muhammadu Buhari justified his decision by claiming that he needed more time to consult with unions and businesses to assess the risks an open market would pose to his country’s manufacturing and small-business sector. Buhari may be cautious, but it’s very likely that the prospect of a continent-wide market eventually will prompt Nigeria to join the AfCFTA.

The AfCFTA also faces the difficult task of fostering cooperation among a multitude of national and regional actors with trade interests that will diverge at times. I discuss these challenges in my book, “Innovating Development Strategies in Africa: The Role of International, Regional and National Actors,” where I argue that ensuring each country benefits and establishing strong compliance mechanisms are critical to success.

[ How much have development strategies changed in Africa since independence? It depends. ]

The heterogeneous size of African economies, the existence of numerous bilateral trade agreements with the rest of the world, overlapping REC memberships, divergent levels of industrial development and varying degrees of openness also pose challenges to the AfCFTA.

African leaders have agreed to have the AfCFTA come into effect within 18 months. For this to occur, at least 22 countries must ratify the agreement formally. Some countries, such as South Africa (which has yet to sign on but is considering it), say the time frame may be too short, especially given the need for debate and negotiations within each signatory nation.

Countries and RECs still have to complete negotiations on competition, dispute-resolution mechanisms, intellectual property rights and investments, among other issues. They should also agree on regulatory frameworks for service-trade liberalization (to facilitate market access), submit tariff concessions schedules for trade in goods (specifying the timeline and nature of products that will be liberalized) and make progress in signing of the free-movement protocol.

The final critical steps for the African Union will be to persuade the remaining countries to join, to create a secretariat to coordinate the implementation and to provide enough resources to ensure the AfCFTA’s success.

Landry Signé is a David M. Rubenstein Fellow in the Global Economy and Development Program and Africa Growth Initiative at the Brookings Institution, distinguished fellow at Stanford University’s Center for African Studies, chairman of the Global Network for Africa’s Prosperity and author of Innovating Development Strategies in Africa: The Role of International, Regional and National Actors.