False Flag Operations Will Start New War? Towards a U.S.-Israeli Attack on Syria and Lebanon?

An interview with Edward Curtin 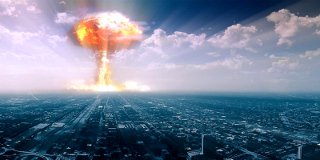 25 Mar 2018 – With Trump’s naming of the war lovers John Bolton as National Security Adviser and Mike Pompeo as Secretary of State, he has signaled that he  is eager to shed more blood and wage a wider war in the service of an imperialistic agenda.

It is in the Middle East where this expansion will likely be ignited in conjunction with Israel, and in Ukraine together with neo-Nazis.

But Trump and the Netanyahu government have a problem: How to start a greatly expanded Middle-Eastern war without having a justifiable reason for one.  No doubt they are working hard to solve this urgent problem.  If they can’t find a “justification” (which they can’t), they will have to create one (which they will).

Or perhaps they will find what they have already created, as has the UK with the Sergei Skripal lies meant to demonize Russia. Whatever the solution, we should feel confident that they are not sitting on their hands. History teaches those who care to learn that when aggressors place a gun on the wall in the first act of their play, it must go off in the final act. These sinister players have signaled us quite clearly what they have in store.

All signs point toward an upcoming large-scale Israeli/U.S. attack on Syria and Lebanon, with  Russia and Iran as the ultimate objectives. As always, the corporate media play along as if they don’t yet know what’s coming.  Everyone in the know knows what is, just not exactly when.  And the media wait with baited breath as they count down to the dramatic moment when they can report the incident that will compel the “innocent” to attack the “guilty.”

None of this is new.  It has been the American way for a very long time.  It is a twisted history, involving massive propaganda and killing, including assassinations, all in the service of expanding and maintaining an empire built on the blood of innocents.  The following interview explores these matters and much more, all in the hope that shedding light on these machinations will help to prevent them from coming to pass.

This podcast was originally published on Geopolitics and Empire on March 24, 2018.

Edward Curtin is a writer whose work has appeared widely and a member of the TRANSCEND Network for Peace Development Environment.  He teaches sociology at Massachusetts College of Liberal Arts. A former college basketball player, he teaches the sociology of sports, and writes on a wide range of topics.  His website is http://edwardcurtin.com/

One Response to “False Flag Operations Will Start New War? Towards a U.S.-Israeli Attack on Syria and Lebanon?”