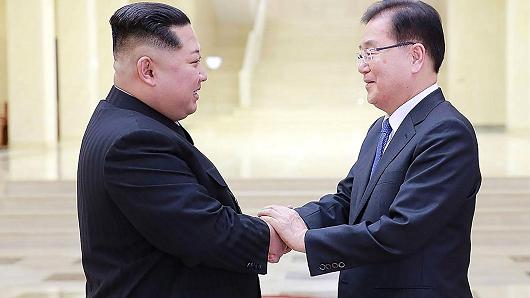 “During this momentous period of historical transformation on the Korean Peninsula, reflecting the enduring aspiration of the Korean people for peace, prosperity and unification, President Moon Jae-in of the Republic of Korea and chairman Kim Jong Un of the State Affairs Commission of the Democratic People’s Republic of Korea held an Inter-Korean Summit Meeting at the ‘Peace House’ at Panmunjom on April 27, 2018.

The two leaders solemnly declared before the 80 million Korean people and the whole world that there will be no more war on the Korean Peninsula and thus a new era of peace has begun.

The two leaders, sharing the firm commitment to bring a swift end to the Cold War relic of longstanding division and confrontation, to boldly approach a new era of national reconciliation, peace and prosperity, and to improve and cultivate inter-Korean relations in a more active manner, declared at this historic site of Panmunjom as follows:

The two leaders agreed, through regular meeting and direct telephone conversations, to hold frequent and candid discussion on issues vital to the nation, to strengthen mutual trust and to jointly endeavor to strengthen the positive momentum towards continuous advancement of inter-Korean relations as well as peace, prosperity and unification of the Korean Peninsula.

In this context, president Moon Jae-in agreed to visit Pyongyang this fall.

Anticopyright: Editorials and articles originated on TMS may be freely reprinted, disseminated, translated and used as background material, provided an acknowledgement and link to the source, TMS: Full Declaration North-South Korea Summit, 27 Apr 2018, is included. Thank you.