“All literature tends to produce a sacred book by an evolution of thought of the highest minds building one upon another…when our lamp is lit, we find the house of our being has many chambers and windows which open into eternity” — A.E. 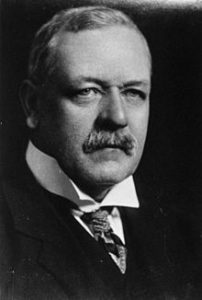 George Warren Russell was an Irish poet, painter, mystic, and reformer of agriculture in the years 1900 to the mid-1930s. He wrote under the initials A.E. and was so well known as A.E. that his friends called him “A.E.” and not “George”.  He was a close friend and co-worker with William Butler Yeats who was a better poet and whose poems are more read today.  Both A.E. and Yeats were part of the Irish or Celtic revival which worked for a cultural renewal as part of the effort to get political independence from England. They hoped to discover literary images in the tales of Celtic Ireland on which both the Irish and Anglo-Irish could look back with pride and in which they could find unity through a common mythology related to the country in which they lived. As A.E. wrote,

“Without the inspiration of great memories or of great hopes, men are incapable of great sacrifices.”

Russell wrote in The Candle of Vision,

Yet he was attacked by some because he had also adopted some non-Irish ideas. He replied in a widely quoted poem On Behalf of Some Irishmen Not Followers of Traditions.

“They call us aliens, we are told,
Because our wayward visions stray
From that dim banner they unfold
The dreams of worn-out yesterday
The sum of all the past is theirs,
The creeds, the deeds, the fame, the name
Whose death-created glory flairs
And dims the spark of living flame.

And they would have us join their  dirge
This worship of an extinct fire
In which they drift beyond the verge
Where races all outworn expire.
The Worship of the dead is not
A worship that our hearts allow.

We hold the Ireland in the heart
More than the land our eyes have seen
And love the goal for which we start
More than the tale of what has been.
One charge alone we give to youth,
Against the sceptred myth to hold,
The Golden heresy of truth.

Ireland lived under a subtle form of colonialism rather than the more obvious Empire in Africa or India where domination was made more obvious by the distance from the center of power and the racial differences.  The Irish were white, Christian, and partially anglicized culturally.  English and Scots had moved to Ireland and by the end of the 19th century became the landed gentry.  Thus Russell and Yeats felt that there had to be a renewal of Irish culture upon which a state could be built. 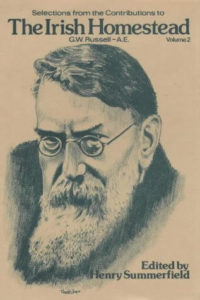 For A.E. the truly modern are those engaged in meditation and spiritual disciplines, a way of reaching

“the world of the spirit where all hearts and minds are one.”

Unless the Celtic peoples create a new civilization, they will disappear and be replaced by a more vigorous race. An Irish identity must be open and unafraid of assimilating the best that other traditions have to offer.

“National ideals are the possession of a few people only.  Yet we must spread them in wide commonalty over Ireland if we are to create a civilization worthy of our hopes and our ages of struggle and sacrifice to attain the power to build.”

When the Irish Free State was created in 1919, the island was partitioned, Northern Ireland remaining part of the United Kingdom.  Tensions between the Free State government and the Republicans who rejected the partition led to a civil war.  Even after the civil war’s end in 1923, Republican resistance and general lawlessness continued throughout the 1920s.  During its first decade, the Free State government faced a serious crisis of legitimacy.  It had to assert the new state’s political and cultural integrity in the face of partition and the lack of social change.  In its economic structures, legal system, post-colonial Ireland looked much like colonial Ireland.  Therefore the government stressed an “Irish culture” of the most repressive and narrow form.  The Roman Catholic Church had a unique and virtually unquestioned monopoly on education in Ireland.  Popular Irish nationalism had been structured around the antithesis between Ireland and England, and this continued after independence when it was said that all “immorality” — obscene literature, wild dances and immodest fashions — came from England.  After 1923, the Catholic hierarchy fulminated most consistently and strongly against sexual immorality, not merely as wrong, but, increasingly from the 1920s, as a threat to the Irish nation. As A.E. wrote in his reflections on Irish politics The National Being (1931):

“We have been told, during my lifetime at least, not to criticize leaders, to trust leaders, and so intellectual discussion ceased and the high principles on which national action should be based became less and less understood, less and less common possession.  The nation was not conceived of as a democracy freely discussing its laws, but as a secret society with political chiefs meeting in the dark and issuing orders.” 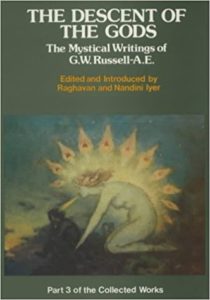 To counter this narrow, state organized vision of culture, A.E. put all his energies into a revival of rural Ireland through organizing the Farmers’ Co-operative Movement.  He stresses that,

“The decay of civilization comes from the neglect of agriculture.  There is a need to create, consciously, a rural civilization.  You simply cannot aid the farmers in an economic way and neglect the cultural and educational part of country life.”

Both A.E. and Yeats came from Protestant backgrounds and were deeply influenced by Indian thought reading the Bhagavad Gita and the Upanishads where sexual passion is the link between body, soul, and spirit.  In his only novel The Avatars, A.E. wrote,

The Avatar in Hindu thought is a spiritual being which takes human form in order to reveal the spiritual character of a race to itself such as Rama, Krishna or Jesus. In the Indian tradition the Avatar was always a man and came alone.  But in A.E.’s story the Avatars are a man and a woman who teach the unity of all life as seen by the love between the two.  There is but one life, divided endlessly, differing in degree but not in kind.

“The majesty which held constellations and galaxies, sun, stars and moons inflexibly in their paths, could yet throw itself into infinite, minute and delicate forms of loveliness with no less joy, and he knew that the tiny grass might whisper its love to an omnipotence that was tender towards it.  What he had felt was but an infinitesimal part of that glory.  There was no end to it.”

A.E. knew that he was going against the current of the moment. As he wrote,

“There never yet was a fire which did not cast dark shadows of itself.”

At the end of the novel, the Avatars are put to death, but their teaching goes on:

“It is this sense of the universe as spiritual being which has become common between us, that a vast tenderness enfloods us, is about us and within us.”

“We are all laying foundations in dark places, putting the rough-hewn stones together in our civilizations, hoping for the lofty edifice which will arise later and make all the work glorious.”

For a good overview of Russell’s more mystical writings and poems, see Roghavan and Nandimi Iyer The Descent of the Gods. The Mystical Writings of G.W. Russell-A.E. (Colin Smythe, 1988)

Anticopyright: Editorials and articles originated on TMS may be freely reprinted, disseminated, translated and used as background material, provided an acknowledgement and link to the source, TMS: G.W. Russell (10 Apr 1867 – 17 Jun 1935): “The Highest Minds Building One upon Another”, is included. Thank you.