Political Mind Games: How the 1% Manipulate Our Understanding of What’s Happening, What’s Right, and What’s Possible 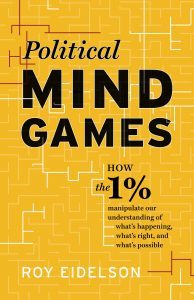 20 Mar 2018 – Giant corporations are raking in record profits, while millions of Americans remain scarred by the Great Recession and a recovery that has left them behind. Mammoth defense contractors push for more of everything military, while programs for the poor are on life support. Global polluters are blocking effective responses to climate change, while the disenfranchised suffer disproportionately from environmental disasters and devastation. Influential voices ridicule those who are disadvantaged by prejudice, by discrimination, and by dwindling resources. All the while, our middle class is shrinking, imperiled, and insecure. This is not the America most of us want.

It’s really no secret that certain individuals and groups—the Koch brothers, Walmart heirs, some Wall Street CEOs, prominent politicians (many Republicans, and some Democrats too), big-business lobbyists, right-wing think tanks, Fox News—use their wealth and influence to pursue a self-serving agenda that betrays the common good. Indeed, they’ve been doing it since long before Donald J. Trump moved into the White House. But what often flies under the radar is the extent to which they rely on psychologically manipulative appeals to advance their narrow interests at the expense of the rest of us. Examples include “The dangers of global warming are overblown,” “Voter fraud is a rampant injustice,” “Workers protesting low wages are devious and dishonest,” “We’ve earned every dollar and deserve your praise, not criticism,” and “Everyone will be helpless if gun reformers have their way.”

In my new book, POLITICAL MIND GAMES: How the 1% Manipulate Our Understanding of What’s Happening, What’s Right, and What’s Possible, I explain the psychology behind the success of today’s plutocrats in marketing their false claims—and what we can do to counter them. Offering a research-based framework, I show how the 1% exploit five fundamental concerns that govern our daily lives: issues of vulnerability, injustice, distrust, superiority, and helplessness. These concerns are soft targets for manipulation because each is linked to a basic question we ask ourselves as we try to make sense of the world around us. Consider:

Are we safe? Whether as passing thoughts or haunting worries, we wonder if we’re safe, if the people we care about are in harm’s way, and if danger lurks on the horizon. Our judgments on these matters go a long way in determining the choices we make and the actions we take. But we’re not particularly good at assessing our vulnerability. Among the ways that the 1% use this shortcoming to their advantage is by promoting alarmist accounts of the perils associated with change.

Are we being treated fairly? Cases of mistreatment frequently stir our anger and our desire to bring accountability to those we hold responsible. But our perceptions of what’s just and what’s not are far from perfect. This makes us ripe for exploitation by those eager to shape our views of right and wrong. That’s a key tactic for today’s plutocrats, and portraying their own selfish actions as efforts to address injustice—on our behalf—is just one of their ploys.

Who should we trust? We tend to divide the world into people and groups we deem trustworthy and others we don’t. When we get it right, we can avoid harm from those who have hostile intentions, while building valuable relationships with those who enhance our lives. But here too our judgments are sometimes unreliable. Among the ways the 1% exploit our doubts is by intentionally fostering distrust in order to divide the ranks of their adversaries.

Are we good enough? We’re quick to compare ourselves to others, often with the hope of demonstrating that we’re worthy of respect or admiration. But the impressions we have about our own worth—and the positive or negative qualities we see in other people—are intrinsically subjective. As a result, they’re susceptible to manipulation. One way plutocrats capitalize on this is by insisting that those who are struggling to get by are simply inferior to the rest of us.

Can we control what happens to us? Feelings of helplessness can pose a substantial obstacle in both personal and collective initiatives. When we lack confidence in our capabilities, we’re more inclined to give up and abandon our goals, and less likely to show resilience in the face of setbacks. The 1% take advantage of this inclination in several ways, including by telling us that stark inequalities are the result of powerful forces beyond everyone’s control.

In responding to these questions, today’s plutocrats are masters at using duplicitous mind games—like “It’s a Dangerous World,” “No Injustice Here,” “They’re Different from Us,” “Pursuing a Higher Purpose,” and “Don’t Blame Us”—to lead us away from a more equal and more decent society. Their answers are designed to manipulate our perceptions and emotions while distracting us from careful evaluation of arguments and evidence. Rather than viewing concerns about vulnerability, injustice, distrust, superiority, and helplessness as guideposts for improving the general welfare, the 1% exploit them to advance their interests and derail effective opposition to their rule.

POLITICAL MIND GAMES was written with a clear purpose: to help inoculate the public against the 1%’s self-serving appeals. When we expose and debunk their mind games, the plutocrats’ empty rhetoric loses its allure, their selfish motives are laid bare, and everyone can see clearly how a privileged few have fleeced and forsaken the country—and the people—that made their enormous wealth and power possible. In turn, this recognition lays the groundwork for the coalition-building and collective action that can restore and reinvigorate our democratic principles and commitments. POLITICAL MIND GAMES is available today.

Roy Eidelson is a member of the TRANSCEND Network and was a member of the American Psychological Association for over 25 years, prior to his resignation. He is a clinical psychologist and the president of Eidelson Consulting, where he studies, writes about, and consults on the role of psychological issues in political, organizational, and group conflict settings. He is a past president of Psychologists for Social Responsibility, associate director of the Solomon Asch Center for Study of Ethnopolitical Conflict at Bryn Mawr College, and a member of the Coalition for an Ethical Psychology. Roy can be reached at reidelson@eidelsonconsulting.com.

Anticopyright: Editorials and articles originated on TMS may be freely reprinted, disseminated, translated and used as background material, provided an acknowledgement and link to the source, TMS: Political Mind Games: How the 1% Manipulate Our Understanding of What’s Happening, What’s Right, and What’s Possible, is included. Thank you.

One Response to “Political Mind Games: How the 1% Manipulate Our Understanding of What’s Happening, What’s Right, and What’s Possible”