“The future belongs to those who believe in the beauty of their dreams.”
–Eleanor Roosevelt

The world is witnessing a new breed of women leaders and game-changers who are gate crashing and boldly scaling new heights even as they are pairing their ingenuity and knowledge with   passion for bringing lasting solutions to society to create a sustainable and more equitable world. Several of them are young icons who are stepping into power in technology, philanthropy, politics, business, and media. 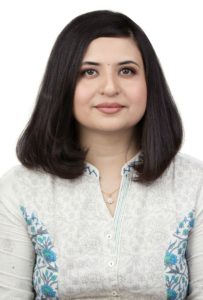 A new twinkling star on the Indian horizon is Sheetal Amte. One may assume that fame should have accrued naturally to her, being born with a privileged lineage. Apart from the iconic global status of her legendary grandfather Baba Amte and no less famous sons Vikas and Prakash and their wives, Bharati and Mandakini, all of them doctors by qualification, Sheetal has her own distinct contribution to nation building .But she arrived on stage in an era where the world refuses to acknowledge you except on your own merits. We live in a world far more complex, demanding much more of us and our collective sense of moral imagination.Sheetal has made a bold entry into the female leadership brigade and her achievements in a short time mark the rapid ascendancy of her trajectory.

Sheetal is a medical doctor disability specialist motivational speaker and social entrepreneur. Poised and elegant she is as a thoughtful campaigner who works methodically to drive change without seeking the limelight. For years after her studies, she worked in the shadows of Anandwan while at the same time seeking exposure to the new development winds blowing across the world. She finally emerged from the woodwork to become CEO of Maharogi Sewa Samiti (MSS -Leprosy Service Society) the flagship organisation that was her sagely grandfather’s’ primary locomotive of social change. In January 2016 she was selected by world economic forum as ‘young global leader 2016’.

Apart from the roll of great honors like John M. Templeton Prize for Progress in Religion, the 1988 United Nations Human Rights Prize, Padma Vibhushan award and International  Gandhi Peace Prize ,there are a thousand stories of Baba Amte and they have been recounted a thousand times—a man who renounced his father’s huge estate embracing an austere life, a man whose first encounter with a leprosy patient left him repulsed and totally transformed him;  ;a man  who created a commune called Anandwan, “forest of joy” for the benefit of  leprosy patients, social outcasts  and those with  disabled  speech and hearing, visually impaired, the orthopedically challenged and the socially backward tribals .

Anandwan was set up in 1951 in the primitive forested backyards of eastern Maharashtra on rocky land that was covered with scrubby vegetation and infested with scorpions, wild boar, cobra and scorpion.This task was carried out by a small band of people: Baba himself, his wife two sons aged 1 and 2, six badly maimed leprosy sufferers, a lame cow and a dog. An army of leprosy patients and other social outcasts created fertile fields from barren rock land and forests and tilled it from scratch with half a dozen tools and their stumps of hands.”Charity destroys, work builds”—became Baba’s life-long credo.

Anandwan village is now home to some 3,000 inmates who are victims of social apartheid. It is a classic representation of the village of Gandhi’s dreams. All of it is the result of the industry of another man, Vikas Amte himself. He is a silent crusader and one of world’s great institution builders .The perfection we see in even the tiniest activity at Anandwan is the fruit of Vikas’s relentless efforts to groom empower every inmate at Anandwan .The pursuit of excellence, for him, is not just a passion but a daily habit. He founded Swaranandwan; an orchestra consisting of disabled artistes, in 2002.He calls it a therapeutic theatre, as it helps build the confidence of members.

Though influenced by a number of political personalities and ideologies of Marx, John Ruskin, Mao and the anarchist Pyotr Kropotkin, Anandwan is noticeably devoid of any belligerent  political overtones-for through all his reading and development ,the   man who founded it not only retained his own individuality but passed on the spirit of freedom to those around him. It continues to resonate through the founder’s pithy quotes on walls and in the literature of the Anandwan. Baba was an illumined sage with extraordinary insight .His spiritualism was not the one shaped by conventional religion but was honed by his own internal search for Truth and the eternal verities.This was the reason why he was such a clear sighted revolutionary. He epitomised Che Guevara’s vision of a great thinker: “The merit of Marx is that he suddenly produces a qualitative change in the history of social thought. He interprets history, understanding its dynamics, predicts the future, but in addition to predicting it, he expresses a revolutionary concept: the world must not only be interpreted, it must be transformed.”

Anandwan has also served as a social laboratory for three generations of Amtes for experimenting their social and economic philosophies. These experiments have yielded some of the most daring social and ecological programmes in India.

Sheetal’s chromosomes have unique and diverse strands: the laser sharp intelligence of father Vikas which flows from Baba Amte and the pure compassion of mother Bharati which flows from Sadhanatai ,Baba Mate’s wife and his most powerful  ally  and source of moral strength. Sheetal’s brother Kaustubh, a chartered accountant by training who manages the finances of Anandwan is the man who will step into Vikas’s shoes when the third generation of Amtes assume full leadership. In fact, he has to regularly relieve his father on the steering wheel to enable him to attend important meetings across the country.

Not content to rest on the laurels of Anandwan’s traditional projects, Sheetal founded ‘mashaal’ and ‘chirag’, the exclusive leadership training programs for motivating medical professionals across India. She has also set up a centre called ‘nijbal’ for offering a complete suite of services for rehabilitation of the disabled.

I first met Sheetal when she was in high school: a serious, demure, quiet and reserved girl bewildered by the aura in which she lived. On the surface, she looked an unlikely candidate for a larger role in Anandwan. Now, as I look back, and after seeing her evolve over the years, I realize that what I saw was just a single slice of her identity. At a more granular level you will find a finely honed analytical person with a steely resolve. She’s a genuinely talented advocate .So when you hear her speak about issues; you immediately sense her passion and the strength of her convictions .The idea that hard work equals success has been in her DNA. She has spent her spare time innovating and constructing integrated solutions to social problems. Her compassion is a natural trait that epitomised her grandmother, Sadhanatai.

Sadhanatai was perhaps the finest practitioner of the art of compassion. Her compassion was white than the whiteness of falling snowflakes. It was hardwired into her brains. We can see glimpses of that magic in Bharati. Into the old, often the frightening world of leprosy wards she comes regularly, practising the compassionate art of nurturing patient’s hopes. Many of the lost tormented sol have been transformed by the magic of her benign attention. Life continues to flutter even in the pall of gloom dispels all their lonely miseries.

What are Sheetal’s dreams for Anandwan? Sheetal is part of the core team that is working hard for making Anandwan India’s first smart village. For her, social work provides both personal and professional joy. Most important to her, a social worker is insulated from the corporate turf wars and ego bashing, fuelled by the fierce race to meet performance targets and generate limitless profits. Sheetal believes that if you focus on generating social value you automatically get personal value natural by product .if you work on just personal value you work on a very long term horizon. This myopic approach has now corrupted corporate philosophy. “We are not looking to corporatize Anandwan—whoever comes here to work has to fit in with the values of this place. The right mindset is needed,” says Sheetal.

Sheeted endorses the idea of Bill Drayton, the greatest modern leader in social entrepreneurship, that the central challenge is to make everyone a changemaker. The first step, she argues, is to take the first step. Social change flows from individual actions. Small gains well consolidated as part of a sequence can mean more than big gains which are unstable and short-lived. By changing what they do, people move societies in new directions. Big simple solutions are tempting but full of risks. For most outsiders, most of the time, the soundest and best way forward is through innumerable small steps; they could be just nudges and tiny pushes. Slower and smaller steps also help build people’s adaptability to changes. We should look for small innovations, not just blockbusters.

What we really need, argues Sheetal are solutions that the end users can work with and sustain them in the long term. This is now a popular approach, known in development discourse as the “bottom-up” approach. It is about living and working with the poor, listening to them with humility to gain their confidence and trust.

Sheetal firmly believes that what we need for any revolution to succeed is humility. When we design solutions that recognize everyone as equal partners, we have a real chance to achieve our goals. This logic comes from the power of empathy—not a form of empathy that comes from superiority, but one born from a profound humility.

History has shown us that many of today’s challenges can be overcome in the years ahead. The world has the tools resources and knowhow to improve the lives of all people. We just need to empower people to use their own knowledge to shape their futures the way young leaders like Sheetal Amte are doing. If we do that, more inclusive development will be within our reach .As Bill Drayton puts it “Entrepreneurs cannot be happy people until they have seen their visions become the new reality across all of society.

Anticopyright: Editorials and articles originated on TMS may be freely reprinted, disseminated, translated and used as background material, provided an acknowledgement and link to the source, TMS: Baba Amte’s Legacy Ignites Granddaughter, is included. Thank you.