As Palestinians were getting killed in Gaza, political leaders around the world switched to their usual doublespeak. 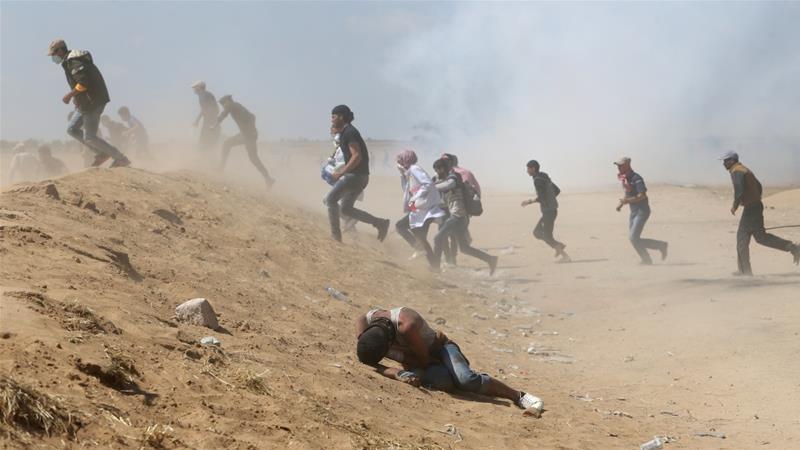 Palestinian demonstrators run from tear gas fired by Israeli forces during a protest marking the 70th anniversary of the Nakba in the southern Gaza Strip. [Ibraheem Abu Mustafa/Reuters]

No other word suffices. No other word captures the signature essence of diplomats – from Canada, the United Nations, Europe – and their obscene, code-word-laced responses to the massacre of Palestinians, including an eight-month-old child.

When the shocking, sprawling human carnage that revealed itself in Gaza on Monday demanded an unequivocal denunciation of the state-sanctioned murder of innocent children, women and men, predictably, they equivocated.

Worse, in prevaricating, they sided, in effect, with the murderers, as cowards are apt to do. In that urgent moment, they hid behind strikingly similar tweets or press releases to point an accusatory finger at the victims; to absolve the perpetrators of their complicity and guilt; to refashion history by insisting that the “violence” did not constitute a massacre, but a “conflict” between two equivalent adversaries; to imply that the victims invited their fates; and to suggest that the victims are propaganda props of “terrorists”.

So, it doesn’t matter what these genteel diplomats say or do at the UN or anywhere else. The transparent cowardice on display since the Bloody Monday massacre in Gaza will always be their contemptible, incriminating legacy.

Exhibit A: Canada’s foreign minister, Chrystia Freeland. After remaining silent while Palestinian after Palestinian was summarily executed week after week by Israeli soldiers, Freeland finally and, no doubt, grudgingly, posted a 45-word tweet oozing with gooey insincerity where she feigned “concern” and “sadness” for all those “dead” Palestinians.

Of course, in her perfunctory tweet, Freeland failed to describe how all those suddenly “dead” Palestinians had been shot in the head and stomach with butterfly bullets by Israeli thugs in uniforms. Instead, she wrote that “all parties to the conflict” bore the responsibility to “protect” civilians.

Despite oodles of eye-witness accounts and photographic evidence, the former journalist was unable to discern that one “party” – armed Israeli thugs – are doing all the killing and maiming, while unarmed Palestinians are doing all the dying and suffering. 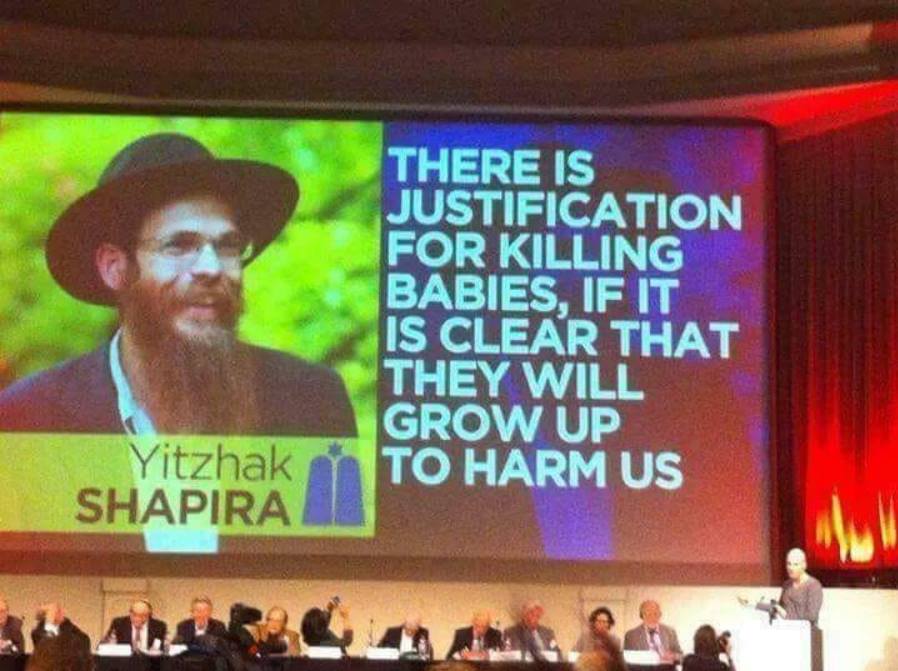 Still, Freeland left it to a compliant underling to invoke the ever-at-the-ready Hamas card to infer that all those Palestinian children, women and men were being killed and maimed because of the “involvement [of a] terrorist organisation” in orchestrating a bold Palestinian expression of human dignity and self-determination.

Read more: My Palestinian right of return is sacred – by Ramzy Baroud

In this tired, inevitable regard, Freeland was parroting Donald Trump’s historically illiterate mouthpiece at the UN, Niki Haley, who told the Security Council yesterday that while she was also “concerned by the violence in the Middle East,” Israel had shown admirable “restraint” in the face of Hamas’ and Iran’s “provocations” and “incitements.”

There you have it. Canada and America agree: Iran and its new “proxy”, Hamas, not Israel, bear ultimate responsibility for the massacres in Gaza. The revisionism is as instructive as it is appalling.

That Freeland’s “people” denounced Hamas, on cue, was serendipitous. In 1997, Canada recalled its ambassador to Israel after it was revealed that bumbling Israeli spies were carrying doctored Canadian passports in a botched attempt to poison Hamas leader, Khaled Meshaal, in Jordan.

Exhibit B: UN Secretary-General Antonio Guterres. The tweet by the UN’s top diplomat  about the butchery in Gaza was a near-verbatim facsimile of Freeland’s and Haley’s statements. He wrote that he was “concerned by the escalation in violence” and urged “everyone” to show “restraint.”

Guterres’ stammering, fill-in-the-blanks diplomacy and false equivalency belie the fact that 109 Palestinians have been slaughtered since the Great March of Return began on March 30 and not one Israeli soldier has been killed or injured in that time.

Given this lethal equation, it’s Palestinians who have demonstrated remarkable resiliency, purpose and “restraint”. Indeed, “restraint” has never been part of the Israeli army’s lexicon. The countless dead and scarred Palestinian refugees in Lebanon, Gaza and the West Bank are an undeniable testament to that fact.

The UN’s shameful false equivalency even extended to the minute of silence observed by members of the Security Council who met in an emergency session yesterday to ostensibly “discuss” the mass murder of Palestinians.

“I should like to take a moment to remember those killed yesterday in Gaza, as well as all those Palestinians, Israelis and others who have died as a result of the conflict that has endured for far too long,” the Security Council’s president said, with all the solemnity she could muster.

There was no “conflict” in Gaza on Monday. There was a massacre. On one side of a barbed-wired fence, cowardly Israeli snipers, sporting high-powered weapons, picked off their quarry with precision, impunity and the blessing of a rancid, racist right-wing Israeli government and millions of complicit Israelis.

On the other side of the fence, brave Palestinians marched as one people – defiant, proud and free – intent on returning to their stolen homes on stolen land.

At the end of the awful day, 60 Palestinians were dead, with thousands more grotesquely injured. One of the killed was eight-month-old Laila Anwar al-Ghandour. She died of tear gas inhalation at dawn on Tuesday at the supposed behest of Hamas, the diabolical theory goes.

Exhibit C: The European Union. The EU’s statement was slightly more verbose. But drained of the de rigueur language, it repeated, like a metronome, the words “conflict,” “restraint,” and “Hamas”. Once again, the word “massacre” wasn’t employed.

Meanwhile, over at the somnolent Hague, the International Criminal Court’s chief prosecutor kept huffing and puffing about how she was keeping a studied eye on Gaza and would “take any action warranted” to prosecute crimes.

These blue-chip diplomats and officials want to deny what we have seen. They not only want to blur the monstrous truth but bury it deep inside a maze of diplomatic double-speak. They want to re-write the horror of what has happened and is happening in Gaza. They want to mollify the murderers at the expense of the ceaseless pain and loss of their victims.

Others, thankfully, have resisted and taken a laudable stand in solidarity with Palestinian humanity and righteousness.

The Irish Prime Minister Taoiseach Leo Varadkar said he was “profoundly shocked” and summoned the Israeli ambassador to convey the Irish people’s outrage and dismay directly. Turkey and South Africa have recalled their ambassadors from Israel.

However symbolic, these important acts are a powerful and tangible antidote to the cowardice of charlatans who claim to be “saddened” by the “violence” in Gaza, but do nothing while Palestinian kids are slain and dismembered for playing football on a beach, flying kites and waving flags in Palestine.

Andrew Mitrovica is an award-winning investigative reporter and journalism instructor.

One Response to “How the Gaza Massacre Exposed International Cowardice”