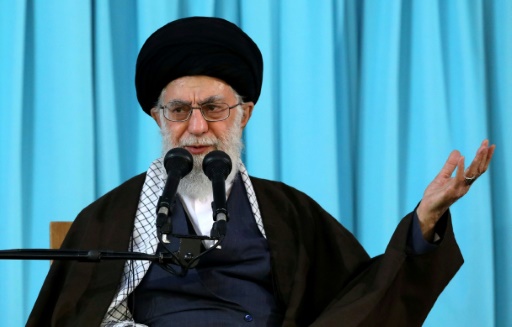 Iran’s Supreme Leader Ayatollah Ali Khamenei, pictured in this handout photo from March 2018, said on May 23 that the United States does not honor its promises. KHAMENEI.IR/AFP/File

24 May 2018 – Iran’s clerical Leader, Ali Khamenei, weighed in on Trump’s violation of the Joint Comprehensive Plan of Action (JCPOA) or Iran nuclear accord of 2015, which the US signed off on along with the rest of the UN Security Council and Germany (informally representing the European Union). Speaking frankly to Iran’s European trading partners, the ayatollah laid down six requirements for Iran to remain in the JCPOA itself. These demands appear to be a response to those made by US Secretary of State Mike Pompeo, whom Khamenei has dismissed as a mere “spy.”

Khamenei expressed his disappointment in Europe’s past and present behavior. He noted that some large European firms were already pulling out of Iran (this may be a reference to Total, SA). He said that on several occasions the US has violated its responsibilities under the JCPOA (referring to new economic sanctions slapped on Iran by Congress after it was signed with a promise of sanctions relief). He added that the Europeans had not so much as complained about these US violations. Then he set out his requirements.

[The line about the benefits of any reduction in Iranian oil sales may reflect a conviction in some circles that it is never bad for an oil state to keep the oil in the ground, since its value will only increase in the future. This line of thinking does not reckon with the rise of electric vehicles, which may make petroleum worthless in 15 years or so.]

If France, Germany and Britain will not undertake these guarantees, Iran reserves the right to start back up its enrichment activities, and would go back to enriching to 19.75%.

(That level of enrichment produces fuel useful in medical reactors and nuclear submarines; but Iran only has one of the former, and none presently of the latter, so enriching to that percentage is simply a form of deterrence, since obviously it is easier to enrich a stockpile of 19.75% to the 95% needed for a bomb than it is to start from scratch. – JC)

Khamenei underlined that since the US plans to make war on Iran via the Department of the Treasury’s Office of Foreign Assent Control (OFAC), Iran would have to respond with its own economic and financial organs, as well as via the foreign ministry.

Khamenei was firm that Iran reserves the right to start back up its enrichment program if it concludes that the JCPOA is useless to it.

A set of ultimatums of this sort signals that Khamenei wants out of the JCPOA, since he surely knows that Europe is highly unlikely to acquiesce in his demands. He clearly has decided that Europe cannot be depended upon to buck Trump, and that its major corporations will most likely fold and pull up stakes from Iran. He may be underestimating the will of the French in particular to defy Trump, and Paris’s willingness to run interference for smaller French firms that do not have significant US business and who want to invest in Iran.

What the UNSC got from Iran in the JCPOA was pushing the timetable for any Iranian nuclear bomb, once Iran decided to create one, from three months out to a year or more. Khamenei’s response to Trump’s destruction of the JCPOA is to go back to the three-month timetable. It is a realistic and significant threat, which not only Europe but Israel and Saudi Arabia will take seriously. Europe in the end will shrug. Israel, Saudi Arabia, the UAE and their bought man in the White House are more likely to respond with extensive covert action against Iran, in hopes of stirring up its ethnic minorities and restless working class.

The aggressive quartet, however, should be careful, since Iran is not helpless and can make trouble for them through covert operations as well.