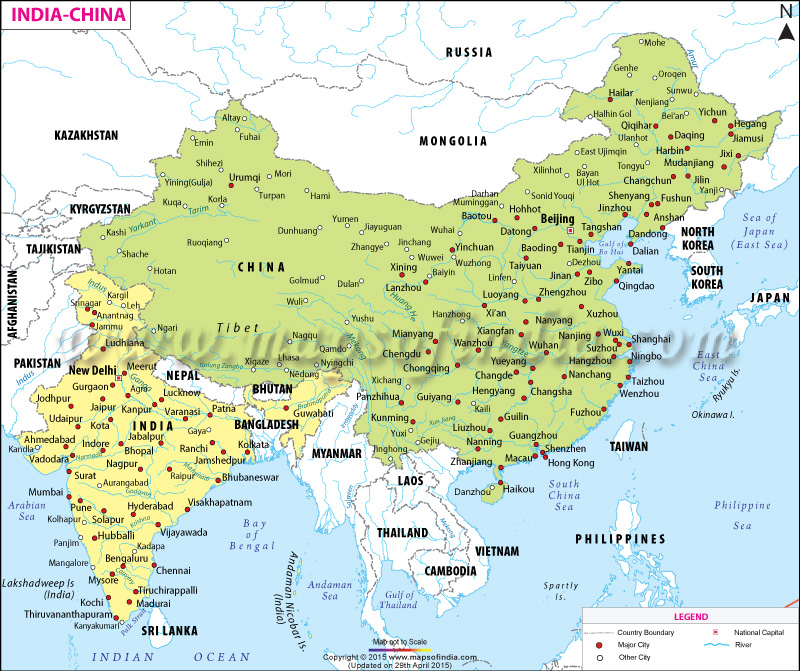 It is hard to believe that earlier India and China were good neighbors bound together by a spirit of goodwill and spirituality. There were other common factors also – scholars, Buddhist monks visiting each other and learning each other’s’ cultures and languages. Trade relations also fostered and strengthened the interaction between the two large countries, but perhaps Buddhism played a dominant part in this relationship.

Considering that China today is an economic, industrial and military power house, it is hard to believe that Sino-Indo relations were so mature and strong not only about a thousand years ago but even as recently as 1947 on spiritual and Buddhist issues.

China competes with USA in many areas and is destined to overtake it in industrially and economically. It is a permanent member of the UN Security Council, a nuclear power and its Navy is dominating the South China Sea and exerts its influence as far as Sri Lanka — not to mention its nearby nations – Thailand, Malaysia, Singapore.

Tibet was an independent country for centuries but China pushed southwards from its borders and annexed Tibet in 1949. Tibet was no match to the Chinese might. There was a proposal in the Indian government to send a military contingent to Tibet to help it to repulse the Chinese force but ultimately the Indian government did not send any military help and China succeeded in its game plan. Although there were some organizations settled in India and elsewhere who wanted to free Tibet from China’s control, this resistance has almost faded away today.

China tried to exert its influence over India in many respects – militarily, economically and politically.  In 1962 China attacked India and overran many parts of North eastern India partly because it did not agree with the boundaries set by the British government when it ruled India and also to display its military power.  Fortunately, China decided to unilaterally withdraw from the territories it overcame.

However, the Chinese attack left our Prime Minister Nehru Jawaharlal bewildered and shocked. He was scarred by this event and felt betrayed. He could not understand the motives of this attack especially because Nehru and the Chinese counterpart Zhou en-Lai had met several times in the past and had good relations with each other. In fact, the relationship of the two countries was symbolized in the concept of Panchsheel — five principles of living together in harmony and friendship.

Although India has agreed to Chinese suzerainty over Tibet and has good elations diplomatically and economically, there is a lot of strain in our relationship with China. One factor is Arunachal Pradesh parts of which Chinese claim is their territory; another is the Doklan standoff where troops between the two countries stand menacingly close to each other. Yet, another is Belt and Road Initiative (BRI) to which India is opposed due to genuine concerns.

The Indian Prime Minister Mr. Modi and the Chinese President Xi have met several times in the recent past to try to reduce the conflict that has both military as well as psychological dimensions. The Shanghai Cooperation Organisatiion SCO held recently in China where the two Prime Ministers met, has given a fresh impetus to improvement of Sino-Indo relationships.

Coming back to our spiritual and Buddhist contacts, it is hard to believe in today’s frosty atmosphere that we had such good and healthy relationships.

Buddhism is one of the oldest world religions that originated in India more than 2500 years ago. It has spread to many parts of the world especially towards Mongolia, Korea, Japan and China and closer to India in Sri Lanka, Tibet, Myanmar, Thailand, Cambodia, Laos and many other regions. In the West, it’s influence travelled to Afghanistan and Turkmenistan and some parts of modern Iran. Religious monks and seers were responsible for the spread of the faith; sometimes the direction was from India to these regions but in some cases especially from China it was the Chinese seers such as Fa-hien, I-tsing who were attracted to Buddhism, came to India though the long and arduous road journey over hills and passes and returned to China to spread their new faith among the masses.

Many monks and seers went to China from India and similarly many Chinese monks and religious people came to India to learn about Sanskrit and Pali languages for better understanding of Buddhism and its texts. Some prominent Indians who travelled to China were:

Dharmatala who went to China during Three Kingdoms Period (220-280 CE), Dharmamitra (356– 442 CE) Buddhist translator travelled to China during Northern Southern Dynasty. Buddhabhdra (359-429 CE) came to China during East Jin Dynasty (265-420 CE), lived a very simple life and begged for his food and other requirements. Dharamaraksa (385–433 CE) and others travelled for propagating the new faith in China.

Similarly, many Chinese scholars and monks came to India for acquiring a better understanding of the faith. One of the prominent ones was Taixu (1890–1947) who was a scholar and monk with an extraordinary memory. he promoted Buddhism and became Abbot of Baiyun Mountain Temple at a young age. He also established World Buddhist Federation in 1924. He established or participated in other organisations for the spread of Buddhism.

When Taixu with his delegation visited India for 45 days in January – February 1940, he travelled to many Buddhist sites, to Calcutta and Shantiniketan etc. He had a lot of discussions with Buddhist leaders of India. The delegation went to Buddhist sites Bodh Gaya, Nalanda, Lumbini, Sarnath and Benares.

One of the things that struck Taixu was that Buddhism was not flourishing in India and the number of monks, monasteries and monuments had declined. He was distressed by this observation and in many speeches he said that he hoped that Buddhism would again flourish in its birthplace. He also promised the help of Chinese Buddhists in this objective.

Taixu also mentioned that under the Qing empire in China (1736 to 1795), Buddhism had suffered a decline but the faith was back on track of revival due to the contributions of Buddhist organisations, efforts of the Chinese monks and of the Sangh in social welfare.

He also supported the idea of establishing a branch of Chinese Buddhist Association in India. He suggested setting of a committee in which Chinese Buddhists would also help in restoration of sacred Buddhist sites in India. For this purpose, he became a life member of the Maha Bodhisatva Society. When he met Nehru he requested Nehru’s help in the restoration work and setting up a Buddhist University. Subsequently he and Nehru received a warm welcome when they traveled together to Benares on the occasion of Ashoka Day celebrations.

As mentioned before, the relations between the two Asian giants have become frosty and risky due to political and trade relations as well as due to the fact that Chinese claim several regions in Arunachal Pradesh and Pakistan occupied Kashmir (POK) as theirs. Buddhism that lays stress on nonviolence, understanding and harmony has now spread to several regions of the world. It is estimated that about 1.6 billion people are followers of this peace loving religion. Can Buddhism, help in improving the relationship to become peaceful and harmonious? We hope that this does occur for the betterment and peace of peoples of the two countries.

Anticopyright: Editorials and articles originated on TMS may be freely reprinted, disseminated, translated and used as background material, provided an acknowledgement and link to the source, TMS: China’s Spiritual and Political Relationship with India, is included. Thank you.