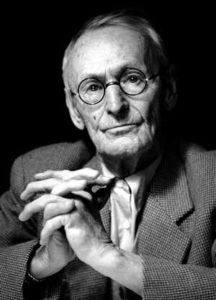 Thus, in 1916-1917 he undertook a psychoanalysis supervised by C.G. Jung. Through Jungian psychoanalysis he developed the idea of a correspondence between an inner state of being and its expression in the outer world.  The war was not only raging on the battlefield but also within the spirit of a generation whose values had collapsed.  He wrote Demian in 1917. His hero says “The world wants to renew itself.  There is a smell of death in the air.  Nothing can be born without first dying”. Demian dies on a Flanders battlefield unable to develop a new system of values.  The book was taken up by youth in the years following the end of the war when many came to wonder if the outcome was worth the sacrifices. 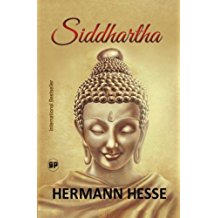 In a reversal, he devotes himself for 20 years to a life of the senses, becoming a successful merchant and finding sensual love.  However, he understands that a life of matter has brought him no closer to tranquility.  Thus he abandons his wife and his possessions. He spends 20 years as a ferryman on a river.  He listens to the whisperings of the water and in the company of a sage, he achieves a harmony of being. As Hesse writes “From that hour, Siddhartha ceased to fight against his destiny.  There shone on his face the serenity of knowledge of one who is no longer confronted with the conflict of desires, who has found salvation, who is in harmony with the stream of events, with the stream of life, full of sympathy and compassion, surrendering himself to the stream, belonging to the unity of all things.”