“Anyone who believes in indefinite growth in anything physical, on a physically finite planet, is either mad or an economist.”
— Kenneth E. Boulding (1910-1993)

Why Are Economists Addicted to Growth?

Economists (with a few notable exceptions) have long behaved as though growth were synonymous with economic health. If the gross national product of a country increases steadily by 4 percent per year, most economists express approval and say that the economy is healthy. If the economy could be made to grow still faster (they maintain), it would be still healthier. If the growth rate should fall, economic illness would be diagnosed. However, it is obvious that on a finite Earth, neither population growth nor economic growth can continue indefinitely.

But why do economists cling almost religiously to the idea of growth? In general, growth brings profits to speculators. For example, purchase of land on the outskirts of a growing city will be rewarded as the land increases in value.; and when the economy grows, stocks rise in value.

Today, as economic growth falters, the defects and injustices of our banking system have come sharply into focus, and light has also been thrown onto the much-too-cozy relationship between banking and government. The collapse of banks during the subprime mortgage crisis of 2008 and their subsequent bailout by means of the taxpayer’s money can give us an insight into both phenomena – the faults of our banking system and its infiltration into the halls of government. The same can be said of the present national debt crisis in the Euro zone and elsewhere.

One feature of banking that cries out for reform is “fractional reserve banking”, i.e. the practice whereby private banks keep only a tiny fraction of the money entrusted to them by their depositors, and lend out all the remaining amount. By doing so, the banks are in effect coining their own money and putting it into circulation, a prerogative that ought to be reserved for governments. Under the system of fractional reserve banking, profits from any expansion of the money supply go to private banks rather than being used by the government to provide social services. This is basically fraudulent and unjust; the banks are in effect issuing their own counterfeit money.

When the economy contracts instead of expanding, the effect of fractional reserve banking is still worse. In that case the depositors ask the banks for their money, which it is their right to do. But the banks do not have the money – they have lent it out, and thus they fail. However, the bankers have insured themselves against this eventuality by buying the votes of government officials. Thus the banks are bailed out and the taxpayers are left with the bill, as in the recent example in which the US Federal Reserve secretly gave 7.7 trillion of the taxpayers’ dollars to bail out various banks.

Today we are able to estimate the population of the world at various periods in history, and we can also make estimates of global population in prehistoric times. Looking at the data, we can see that the global population of humans has not followed an exponential curve as a function of time, but has instead followed a hyperbolic trajectory. 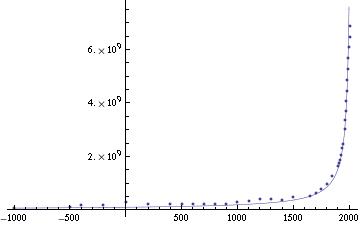 The simple mathematical curve that fits best to human population data over the last 3,000 years is not an exponential increase, but rather a hyperbola of the form P=C/(2025-t). Here P represents population, C=190,000,000,000 and t is the year. The curve goes to infinity at t=2025 (only a few years away), which is of course impossible. Global population has already started to fall away from the hyperbolic trajectory. Will it level off, or will it crash disastrously? Because of the enormous amount of human suffering that would be involved in a population crash, the question has great importance.

At the time of Christ, the population of the world is believed to have been approximately 220 million. By 1500, the earth contained 450 million people, and by 1750, the global population exceeded 700 million. As the industrial and scientific revolution has accelerated, global population has responded by increasing at a break-neck speed: In 1930, the population of the world reached two billion;  in 1958 three billion; in 1974 four billion; in 1988 five billion, and in 1999, six billion.  Today, we have reached 7.6 billion, and roughly a billion people are being added to the world’s population every twelve years.

How are we to explain the fact that the population curve is not an exponential? We can turn to Malthus for an answer: According to his model, population does not increase exponentially, except under special circumstances, when the food supply is so ample that the increase of population is entirely unchecked. 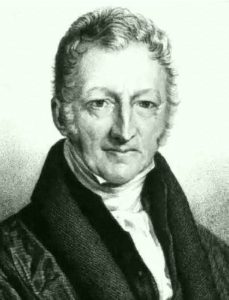 T.R. Malthus’ “Essay on The Principle of Population”, the first edition of which was published in 1798, first study of population to stress the fact that, in general, powerful checks operate continuously to keep human populations from increasing beyond their available food supply. In a later edition, published in 1803, he buttressed this assertion with carefully collected demographic and sociological data from many societies at various periods of their histories.

Malthus gives us a model of culturally-driven population growth. He tells us that population increase tends to press against the limits of the food supply, and since these limits are culturally determined, population density is also culturally-determined. Hunter-gatherer societies need large tracts of land for their support; and in such societies, the population density is necessarily low. Pastoral methods of food production can support populations of a higher density. Finally, extremely high densities of population can be supported by modern agriculture. Thus, Gell-Mann’s hyperbolic curve, should be seen as describing the rapidly-accelerating growth of human culture, this being understood to include methods of food production.

If we look at the curve, P=C/(2025-t), it is obvious that human culture has reached a period of crisis. The curve predicts that the world’s population will rise to infinity in the year 2025, which of course is impossible. Somehow the actual trajectory of global population as a function of time must deviate from the hyperbolic curve, and in fact, the trajectory has already begun to fall away from the hyperbola.

Because of the great amount of human suffering which may be involved, and the potentially catastrophic damage to the earth’s environment, the question of how the actual trajectory of human population will come to deviate from the hyperbola is a matter of enormous importance. Will population overshoot the sustainable limit, and crash? Or will it gradually approach a maximum? In the case of the second alternative, will the checks which slow population growth be later marriage and family planning? Or will the grim Malthusian forces – famine, disease and war – act to hold the number of humans within the carrying capacity of their environment?

We can anticipate that as the earth’s human population approaches 10 billion, severe famines will occur in many developing countries. The beginnings of this tragedy can already be seen. It is estimated that roughly 30,000 children now die every day from starvation, or from a combination of disease and malnutrition.

Beyond the Fossil Fuel Era

An analysis of the global ratio of population to cropland shows that we have probably already exceeded the sustainable limit of population through our dependence on petroleum: Between 1950 and 1982, the use of cheap synthetic fertilizers increased by a factor of 8. Much of our present agricultural output depends on their use, but their production is expensive in terms of energy. Furthermore, petroleum-derived synthetic fibers have reduced the amount of cropland needed for growing natural fibers, and petroleum-driven tractors have replaced draft animals which required cropland for pasturage.

Also, petroleum fuels have replaced fuelwood and other fuels derived for biomass. The reverse transition, from fossil fuels back to renewable energy sources, will require a considerable diversion of land from food production to energy production. For example, 1.1 hectares are needed to grow the sugarcane required for each alcohol-driven Brazilian automobile.  This figure may be compared with the steadily falling average area of cropland available to each person in the world: .24 hectares in 1950, .16 hectares in 1982.

Thus there is a danger that just as global population reaches the unprecedented level of 10 billion or more, the agricultural base for supporting it may suddenly collapse. Ecological catastrophe, possibly compounded by war and other disorders, could produce famine and death on a scale unprecedented in history – a disaster of unimaginable proportions, involving billions rather than millions of people.

What Would Malthus Say Today?

What would Malthus tell us if he were alive today? Certainly he would say that we have reached a period of human history where it is vital to stabilize the world’s population if catastrophic environmental degradation and famine are to be avoided. He would applaud efforts to reduce suffering by eliminating poverty, widespread disease, and war; but he would point out that, since it is necessary to stop the rapid increase of human numbers, it follows that whenever the positive checks to population growth are removed, it is absolutely necessary to replace them by preventive checks. Malthus’ point of view became broader in the successive editions of his Essay; and if he were alive today, he would probably agree that family planning is the most humane of the preventive checks. 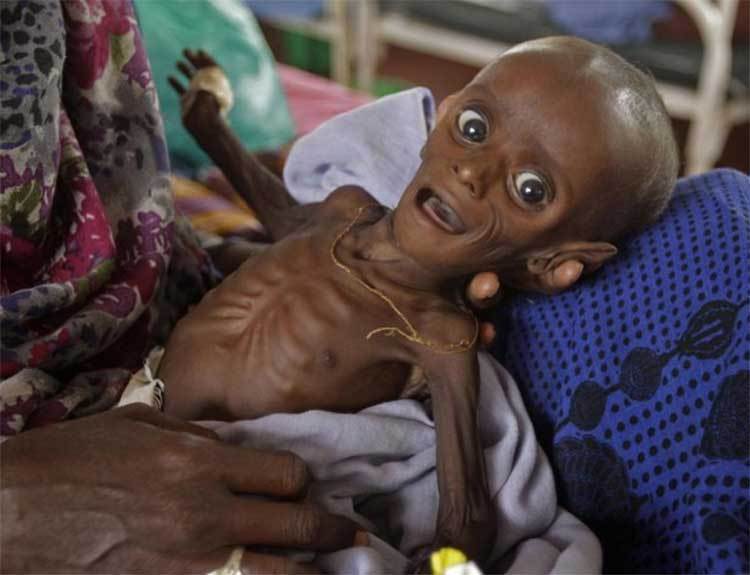 A starving child in Somalia. Today it is estimated that 30,000 children die every day from starvation, or from diseases related to poverty.

In most of the societies which Malthus described, a clear causal link can be seen, not only between population pressure and poverty, but also between population pressure and war. As one reads his Essay, it becomes clear why both these terrible sources of human anguish saturate so much of history, and why efforts to eradicate them have so often met with failure: The only possible way to eliminate poverty and war is to reduce the pressure of population by preventive checks, since the increased food supply produced by occasional cultural advances can give only very temporary relief.

Today, the links between population pressure, poverty, and war are even more pronounced than they were in the past, because the growth of human population has brought us to the absolute limits imposed by ecological constraints. since the increased food supply produced by occasional cultural advances can give only very temporary relief.  Furthermore, the development of nuclear weapons has made war prohibitively dangerous.

How Many People Can the Earth Support in Comfort?

Anticopyright: Editorials and articles originated on TMS may be freely reprinted, disseminated, translated and used as background material, provided an acknowledgement and link to the source, TMS: Madmen and Economists, is included. Thank you.

One Response to “Madmen and Economists”