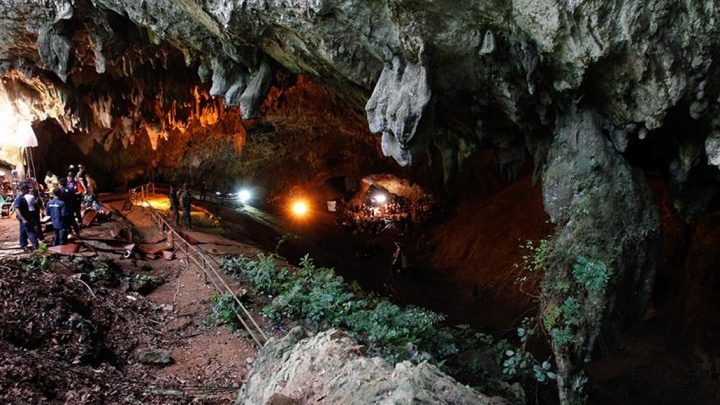 11 Jul 2018 – While the world watched and waited with bated breath for the outcome of the substantial global effort – involving over 100 cave divers from various countries, 1,000 members of the Thai Army and 10,000 others in various roles – to rescue a team of 12 young football players and their coach, who were trapped inside a flooded cave in Thailand for 17 days, 850,000 children were killed by human adults in other parts of the world, many of them simply starved to death in Yemen or other parts of Africa, Asia and Central/South America.

But other children were killed in ritual sacrifice, many children were killed after being sexually trafficked, raped and tortured, many were killed in wars (including in Yemen), many were killed while living under military occupation, many died as child soldiers or while working as slave laborers, and vast numbers of other children suffered violence in a myriad other forms ranging from violence (including sexual violation) inflicted in the family home to lives of poverty, homelessness and misery in wealthy industrialized countries or as refugees fleeing conflict zones. See ‘Humanity’s “Dirty Little Secret”: Starving, Enslaving, Raping, Torturing and Killing our Children’.

Why did the world’s corporate media highlight the flooded Thai cave story so graphically and why do so many ordinary people respond with such interest – meaning genuine emotional engagement – in this story? But not the others just mentioned?

And what does this tell us about human psychology and geopolitics?

Needless to say, a great deal.

During the Thai cave drama, major corporate media outlets, such as the Washington Post and the BBC, were routinely releasing ‘breaking news’ updates on the status of the rescue effort. At high points in the drama, reports on this issue were overshadowing major political and other stories of the day. At the same time, there were no ‘breaking news’ stories on any of the many myriad forms of violence against children, which were (and are still) killing 50,000 children each day.

So why the corporate media interest in this essentially local (Thai) story about a group of 12 children trapped in a cave? And why did it attract so much support, including foreign cave divers, engineers and medics as well as technology billionaire Elon Musk, who flew in to investigate rescue options and assist with the rescue effort. They and their equivalents are certainly not flying in to rescue children in a vast number of other contexts, including where the provision of simple, nourishing meals and clean water would do wonders.

Well, in essence, the story was a great one for the corporate media, simply because it reported on something of little consequence to those not immediately impacted and enabled the media to garner attention for itself and other (western) ‘heroes’ drawn into the story while engaging in its usual practice of distracting us from what really matters. And it was an easy story to sell simply because the media could use a wide range of safe emotional triggers to draw people into the dramatized story without simultaneously raising difficult questions about the (appalling) state of the world and responsibility for it.

In simple language: like sports events and other forms of entertainment, the cave rescue provided a safely contained time and space for people to feel emotionally engaged in (this case) a real-life drama (with feelings like fear and relief allowed an outlet) while carefully reinforcing their unconscious feeling of powerlessness to do anything about it and their acceptance of this. This is why it was so important that expert rescue efforts were highlighted: the key media message was that ‘there is nothing you can do’.

Of course, in this context, this was largely true. The problem is that the corporate media coverage wasn’t aimed at this context. It was aimed at all those other contexts which it wasn’t even discussing, let alone highlighting: the vast range of issues – including the many ongoing wars and endless military violence, the threat of nuclear war, the climate catastrophe and innumerable threats to our biosphere posed by such activities as rainforest destruction, the refugee crisis, military occupations, as well as the ongoing violence against children in so many contexts as touched on above – that need a great deal of our attention but for which the elite uses its corporate media to distract us and reinforce our sense of powerlessness. 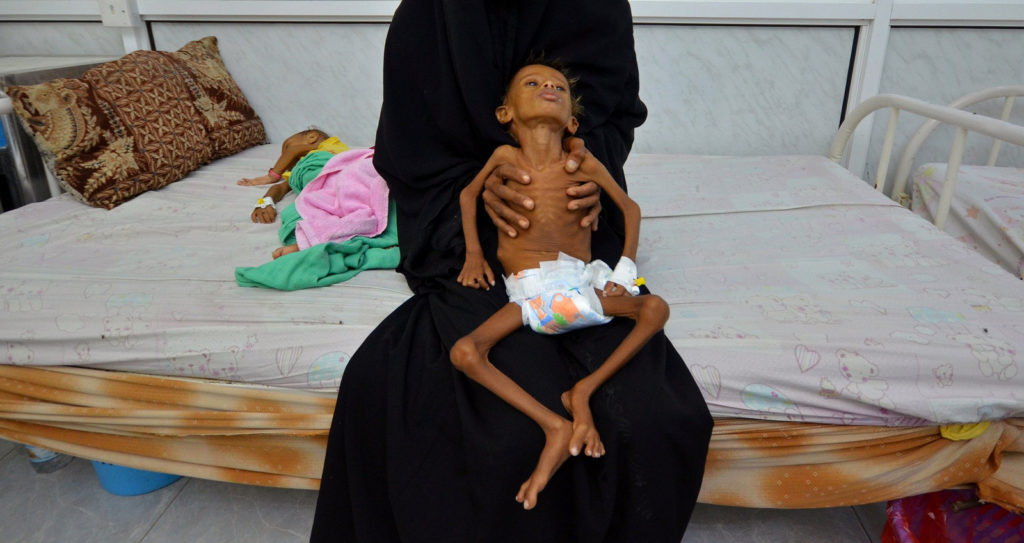 A six-year-old boy is held by his mother at a malnutrition intensive care unit at a hospital in Hodaida, Yemen. | Reuters

Another aspect of the story was the way in which it highlighted the ‘accidental’ nature of the incident: no one was really responsible, even the hapless coach who was just trying to give his young players an interesting excursion and whom, according to reports, none of the parents blamed.

By focusing on the logistical details of the story (the distance into the cave, the narrowness of certain passages, rescue possibilities, equipment, the threat of monsoon rains…), without attributing blame, the media could reinforce its endless message that ‘no-one’ is responsible for the state of the world. Hence, no individual and no organization is responsible for doing anything either. Again, this message is designed to deepen a sense of powerlessness and to make people disinclined to act: to make them powerless observers rather than active participants in their own fate.

As an aside, of course, it should be noted that in those contexts where it serves elite interests to attribute blame, it certainly does so. Hence, elites might contrive to blame Muslims, Russians, Palestinians or the other latest target (depending on the context) for some problem. However, in these contexts, the story of ‘blame’ is framed to ensure that elites have maximum opportunity to act as they wish (often militarily) while (again) engendering a sense of powerlessness among the rest of us.

The tragedy of the Thai cave incident is that one man died and many boys spent 17 days in a situation in which they were no doubt terrified and suffering genuine physical privation. But elite media cynically used the event to distract us from vitally important issues, including ongoing grotesque violence against children in a large number of contexts, and to reinforce ‘The Delusion “I Am Not Responsible”’.

In short, while the 12 boys and their coach were rescued after 17 days trapped in a flooded cave in Thailand which required a sophisticated and expensive international effort, during the same period around the world, 850,000 children were killed by human adults. Even in Thailand during this 17-day period, apart from those children violated and killed as a result of sex trafficking and other violence, 119 children drowned (at the rate of seven each day). See ‘Swim Safe: Preventing Child Drowning’. Obviously, these children were ignored because there was no profit in reporting their plight and helping to mobilize an international effort to save them.

So what can we do?

Well, for a start, we can boycott the corporate media and certainly not spend any money on it. What little truth it contains is usually of even less value (and probably gets barely beyond a good sports report). Instead, invest any money you previously spent on the corporate media by supporting progressive news outlets. They might not have reported events in relation to the Thai cave rescue but they do report on the ongoing violence inflicted on children in more grotesque circumstances such as the war in Yemen. They will also report and analyze important global events from a truthful and life-enhancing perspective and will often offer strategies for your engaged involvement.

If you want to nurture children to be powerful agents of change who will have no trouble resisting attempts (whether by the corporate media or any other elite agent) to distract and disempower them, you are welcome to consider making ‘My Promise to Children’.

If you are easily conned yourself, you will vastly enhance your capacity to discriminate and focus on what matters by ‘Putting Feelings First’ which will, among other things, restore your conscience, intuition and ‘truth register’, vital mental functions suppressed in most people.

You are also welcome to consider participating in ‘The Flame Tree Project to Save Life on Earth’ which maps out a fifteen-year strategy for creating a peaceful, just and sustainable world community so that all children (and everyone else) has an ecologically viable planet on which to live.

And for the vast range of other manifestations of violence against children touched on above, you might consider using Gandhian nonviolent strategy in any context of particular concern to you. See Nonviolent Campaign Strategy or Nonviolent Defense/Liberation Strategy.

You might also consider signing the online pledge of ‘The People’s Charter to Create a Nonviolent World’ which explicitly identifies the role of the corporate media, among many other elite agencies, in promoting violence.

Am I pleased that the 12 children and their coach in Thailand were rescued? Of course I am. I just wish that an equivalent effort was being made to rescue each of the 50,000 children we will kill today, tomorrow, the next day and the day after that….

Anticopyright: Editorials and articles originated on TMS may be freely reprinted, disseminated, translated and used as background material, provided an acknowledgement and link to the source, TMS: Starving and Bombed Children of Yemen Seek Entrapment in Flooded Thai Cave, is included. Thank you.