Plaintiff Dewayne Johnson reacts after hearing the verdict in his case against Monsanto at the Superior Court of California in San Francisco, Aug. 10, 2018. Josh Edelson/Pool Photo via AP

12 Aug 2018 – In the first of many pending lawsuits to go to trial, a jury in San Francisco concluded on Aug. 10 that the plaintiff had developed cancer from exposure to Roundup, Monsanto’s widely used herbicide, and ordered the company to pay US$289 million in damages.

The plaintiff, Dewayne Johnson, had used Roundup in his job as groundskeeper in a California school district. He later developed non-Hodgkin lymphoma. The jury awarded Johnson $39 million in compensatory damages to cover pain, suffering and medical bills due to negligence by Monsanto, plus an additional $250 million in punitive damages.

This means the jury wanted to punish Monsanto because members believed the company deliberately withheld from the public scientific knowledge that glyphosate, the active ingredient in Roundup, was a cancer danger. The size of the damages awarded indicates that the jury was not persuaded by Monsanto’s expert witnesses. 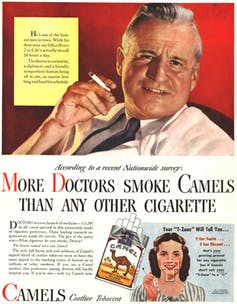 A 1946 advertisement suggested that cigarettes were safe by showing a doctor smoking. Scientific evidence later showed that heavy smoker had 10 to 20 times higher risk of developing cancer than non-smokers.
SRITA, CC BY-ND

Product liability lawsuits are an important part of American culture. There are many examples of companies knowingly adding toxic agents to their products. So there must be a process for aggrieved individuals who have been harmed to hold these companies accountable.

On the other hand, a lawsuit can be brought against any company for any reason, and some may be frivolous. It is an unfortunate comment on our health care system that so many people are uninsured, and if struck by a dreaded disease, must seek money to deal with it somehow from somewhere.

In many instances it is simply unknown whether a product and its contents are a danger. This verdict is just the first in what could be a long legal battle over Roundup, and proving causality in such cases is not easy. But here are some observations from my own experience trying to help figure out why people get cancer. 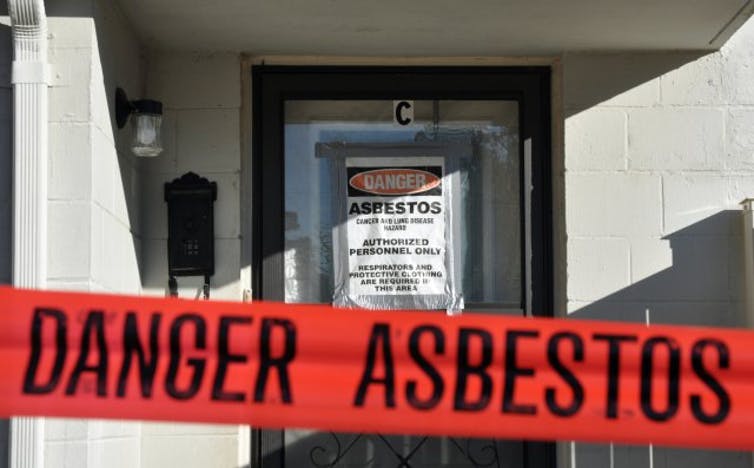 Asbestos was widely used in flooring, walls, ceilings and pipes until the 1980s, when it was shown to cause lung cancer. Today workers removing asbestos from older buildings wear protective clothes and respirators.
US Army

How credible is the scientific case against Roundup?

Much of the plaintiff’s case was based on a widely criticized 2015 statement by the International Agency for Research on Cancer, part of the World Health Organization, that glyphosate was a “probable human carcinogen” (Group 2A on its scale). A classification of “human carcinogen” (Group 1) means that a panel of scientists convened by the IARC believes the agent is a cancer hazard to humans, like smoking and ionizing radiation. The 2A classification is not as strong. It means that there is credible evidence, but it does not reach the standard of “beyond a reasonable doubt.”

The IARC’s process for determining carcinogenicity has come under heavy criticism before. In particular, in the early 2000s some observers worried that industry was actually influencing the agency to downgrade its classification of chemical agents. In the Roundup cases, the accusation against the IARC cuts the other way. According to some accounts, it was biased against industry and sought a harsh classification for glyphosate.

The IARC has provided a detailed defense of its process in the glyphosate evaluation. It has also published a monograph on glyphosate with all the gory details of the science behind its evaluation.

I served on a monograph working group in 2007 for an IARC assessment of whether shift work was a potential cancer hazard. I have also participated in three other meetings sponsored by IARC over the years, so I have seen the agency’s process up close. In my view, IARC personnel go to great lengths to ensure objectivity and scientific rigor.

This does not mean that their classifications are the last word. In fact, the agency has often changed its classification of an agent based on new evidence after initial evaluation. Sometimes it has become more certain that the agent poses a hazard, but in other cases it has downgraded the hazard.

Monsanto argues that hundreds of tests have shown Roundup does not pose health risks, but several thousand plaintiffs are suing the company, charging that glyphosate gave them cancer.

What path for glyphosate?

Glyphosate and Monsanto could follow the path of the Johns-Manville company, which started manufacturing asbestos products in the 1880s. After many epidemiological studies showed that exposure to asbestos caused very high rates of lung cancer – primarily pleural mesothelioma – and much litigation, the company went bankrupt in 1982. Its assets were reorganized to form the Manville Trust, which allocates monetary damages to people harmed by asbestos.

Some products still contain small quantities of asbestos today, including motor vehicle parts and fireproof clothing. The Environmental Protection Agency tried to ban it in 1989, but was overturned by a federal court. Nonetheless, because asbestos is so clearly linked to cancer, most companies avoid it now for fear of liability.

Alternatively, glyphosate may follow the route of saccharin, an artificial sweetener discovered in the late 1870s. In 1970 scientists reported that saccharin caused bladder cancer in rats, which led the U.S. Food and Drug Administration to propose a ban on this extremely popular product in 1977.

However, after much more research – including toxicology in rats and epidemiologic studies in people – the IARC downgraded saccharin from a classification of “2B: possible human carcinogen” to “3: not classifiable,” and the U.S. National Toxicology Program removed saccharin from a 2016 report on carcinogens. As it turned out, the mechanism for causing bladder cancer in rats did not apply to people, and epidemiological studies showed no association.

Monsanto will undoubtedly appeal this initial decision, and it could be years before the issue is settled once and for all. But with this verdict, the onus is now on Monsanto to provide compelling evidence that Roundup is safe in other trials that soon will follow.